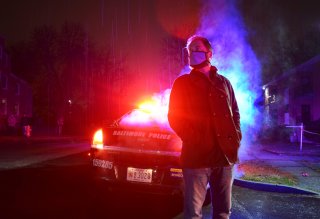 The coronavirus crept into Baltimore in the middle of March, amid the city’s usual variety of carjackings, commercial break-ins, and wild not-so-west chaos. At first, it introduced itself as a temporary problem. The danger it posed seemed straightforward: contact with the virus could lead to death. Baltimore reacted to it by shutting the doors of its businesses. People made panicked purchases as they prepared to go into temporary hibernation. They were the locusts of their local grocery stores. First, they ransacked the fresh vegetables and frozen meat section. Afterward, they plowed through the bread aisle, the canned goods, and the paper products. Then, most of them hid from the deadly virus until they were tired of hiding from it. But by that time, the pathogen had nestled into its new home and begun to show that the dangers it posed were far more diverse. It didn’t just put at risk the health of Baltimore’s roughly 590,000 residents; rather, it put into jeopardy the economic welfare and security of the entire city.

By the end of the year, Baltimore’s restaurants had shuttered their doors. Tourism, which often bolstered the city’s economy, had begun to dwindle despite commercials that urged outsiders to visit a place that prioritized sanitation and social-distancing. Meanwhile, city residents, who had come to rely heavily on the U.S. postal system for goods and gifts in the months leading up to the holidays, learned in the weeks before Christmas that hundreds of postal workers had contracted the coronavirus and their package deliveries would be delayed. And as the wrath of the pandemic persisted, so did the city’s vast collection of violent crimes, which couldn’t be curtailed by stay-at-home orders or contained by other restrictions. In fact, the only thing that really changed was the way that police approached them. 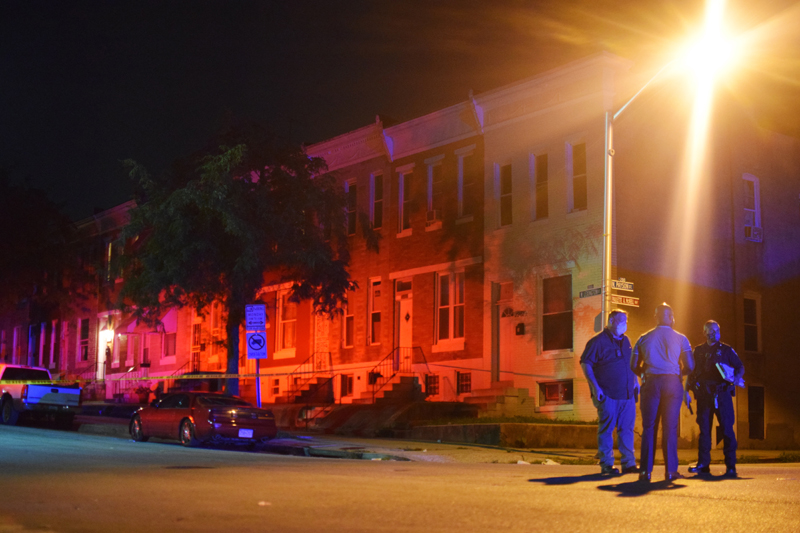 At first, in the spring, police were subjected to strict precautions. At the height of pandemic paranoia, officers were instructed to wear their custom-fit N-95 masks whenever they exited their vehicles. By the fall, the police department had relaxed its rigid restrictions to fit with the governor’s mantra: wear a mask. In those days, officers could often be seen conducting their duties in a variety of masks. Medical masks. Black masks. Tribal masks. State flag masks. Every crime scene quickly became a masquerade party. In pre-pandemic times, each man and woman wore the same police uniform but bore their own identity. But during the coronavirus era, they were essentially all auditioning for the lead role in The Phantom of the Opera. And in the final months, in the end, some of them dropped out of the audition process at selective points throughout the day. After all, not everyone is born to act—even though most people spend their whole lives perfecting the art of acting. 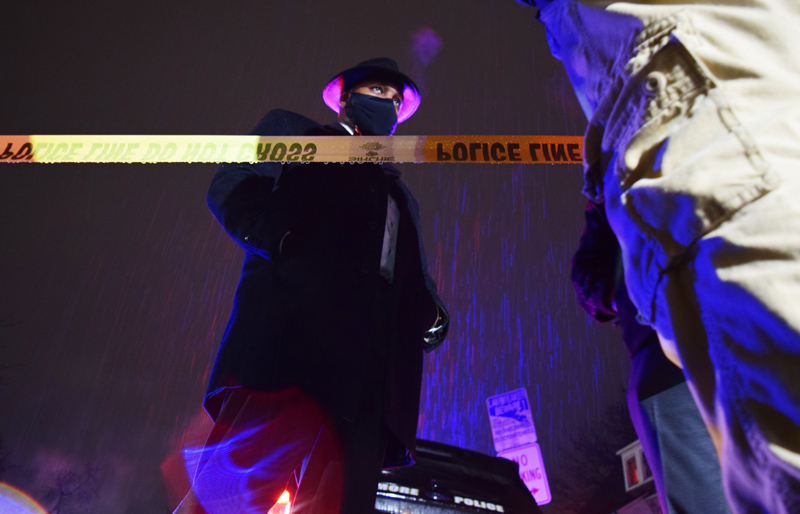 Then came the holidays, the coldest of cold days when the weather had the power to kill people who weren’t already teetering on the cusp of death by virus. But cruelty doesn’t take a vacation day. People lost their loved ones in the most callous and casual of ways. On Christmas Eve. On Christmas Day. They entered the world as bright spots on the map of human existence, the unimagined gift that someone never knew they always wanted, only to exit the world unraveled and unwrapped. The remnants of their last moments of life would only sit on the street long enough for crime lab technicians to document them, but the ghost of their presence would linger and circle back year after year. Someone’s mother would be constantly haunted by an unexpected monumental loss. In Baltimore, early on Christmas morning, a young man’s life was snuffed out right before the sun rose. Police wrapped yellow crime-scene tape around the street where he had been gunned down and stretched it into the nearby housing project where he was sitting prior to the shooting. Neighborhood residents walked past the police and paused at the crime scene. “Merry Christmas,” they said to one another as officers scurried about conducting police activities without the tone of sarcasm or anger dancing on their tongues. Their wishes were sincere, undeterred by the dark event that had unfolded while they were curled up in their beds. 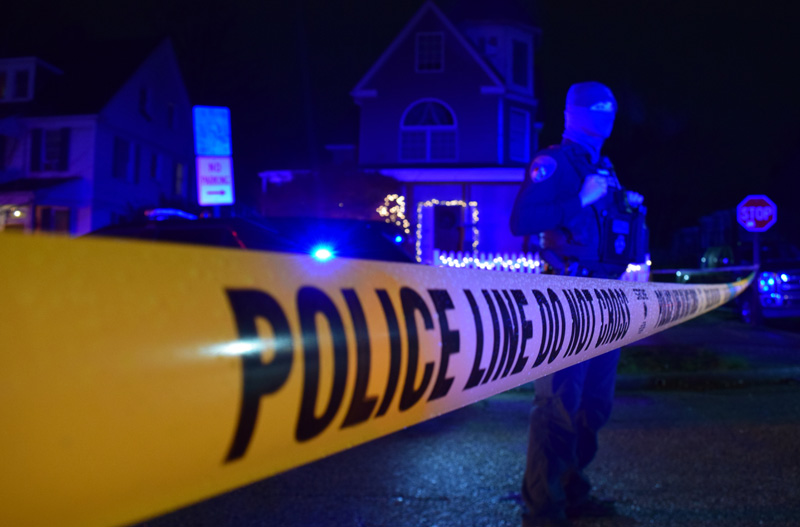 That’s how far the city had progressed down the rabbit hole of cyclical violence. People were affected by its circular pattern on various levels that were often dictated by their proximity to its center of origin. Some of them watched those chaotic cycles destroy their lives while others had learned to calmly cope with them. After all, it wasn’t the new normal. It was the constant variable in the equation that people used to measure their lives. They either reacted to it with mild curiosity and went about their business or they expressed frustration after learning more about what had happened.

“Why are they here?”

(Person turns around and walks away.)

“A police car flipped over.”

(Person makes a series of exacerbated noises and stomps off.) 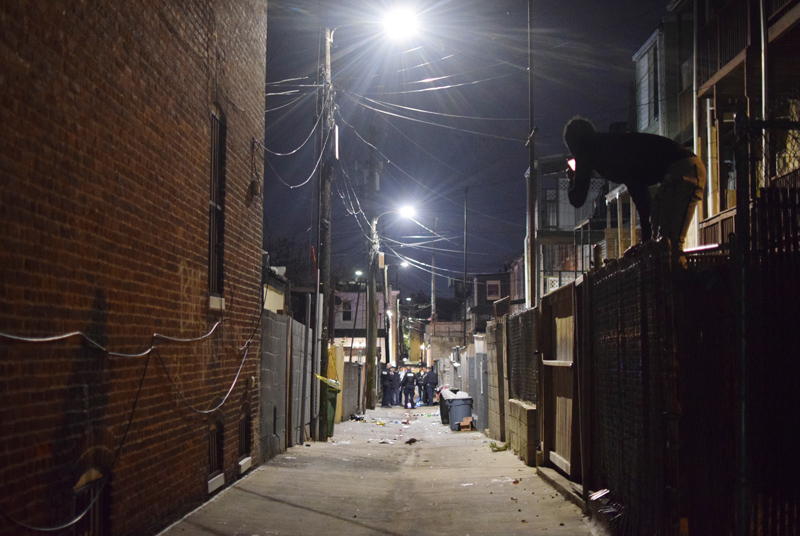 The city’s constant chaos wasn’t dissuaded by the pandemic; it was aided and abetted by it. Many people donned face masks in an effort to contain the deadly virus, which also meant that everyone with nefarious intentions was conveniently dressed at all times to rob a corner store. They didn’t look suspicious; they blended in with the crowd. In previous years, they wouldn’t have been welcome inside many of those stores, which relied on colorful plastic signs to deter people with masks and hoodies from entering the premises. But their presence was welcome amid growing paranoia about the killing capability of the coronavirus and increasing economic uncertainty. As the pandemic persisted, those signs were quickly swapped out for ones that said: No Mask, No Service. At the same time, the virus made sporadic headway in depleting the resources of the police department. In the spring, the police department had to shut down its station in southwest Baltimore after a few of its officers had contracted the coronavirus. It hired a team of men in biohazard suits to sanitize the dozens of patrol cars that officers had been sharing. 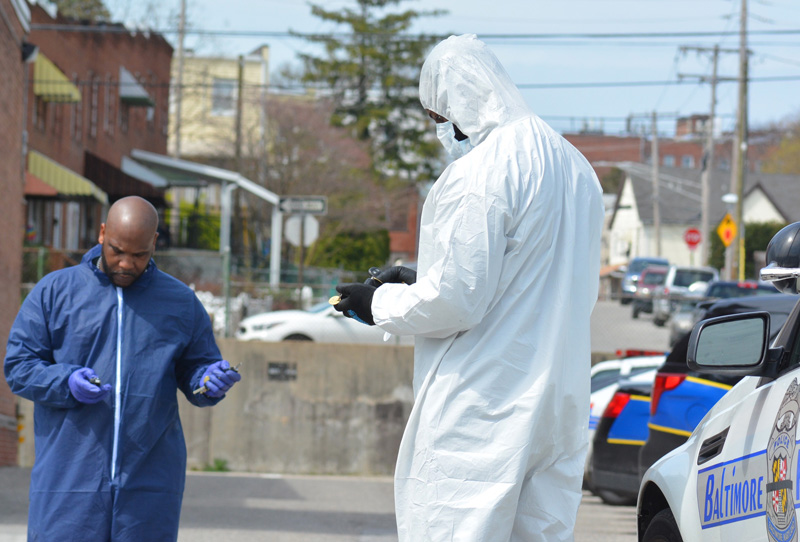 Then, a few months later, right before the summer rolled around, the virus created a contentious budget environment that stripped the department of $22.4 million in funds. By the fall, the virus was practically knocking out entire police units at a single time. For example, members of the K-9 unit and the aviation unit couldn’t work until they were tested for the virus. In some cases, multiple officers had to go into self-quarantine before they could return to work. The damage done by these sporadic outbreaks wasn’t as simple as the number of officers available to respond to the community’s calls for police assistance had been diminished. There were fewer dog handlers to assist with police investigations. The department’s helicopter was temporarily unavailable, so it wasn’t able to help search for an inebriated driver who struck a patrol car and then sped off one night in December. Police were only able to stop the driver after that person crashed their vehicle into a wall. And although there were ways to mitigate these unanticipated strains on department resources, one bitter fact remained: It was the perfect storm. 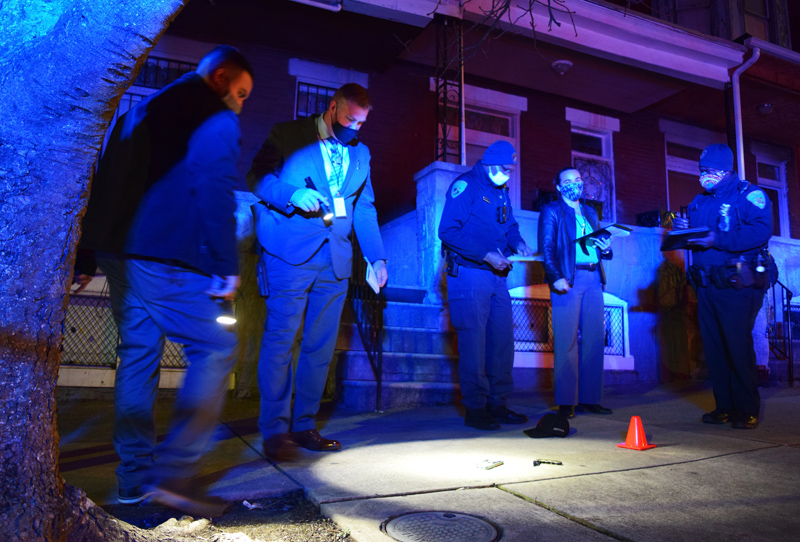 The storm’s wrath would have an impact on Baltimore’s annual crime statistics—just perhaps not in a glaringly obvious way. At the end of every year, Baltimore is measured and weighed by its homicide rate. Its success and failure come down to one number. It’s a tally that has the power to steer the local conversation for a bit, possibly even inciting backlash against public officials who made tantalizing promises about crime suppression or the police commissioner whose plans for curbing the violence perhaps haven’t been fully implemented or maybe weren’t that great from the get-go. People want to see change when they don’t want to change. People want the power to create change when they wouldn’t know how to properly wield that power. It is there, in that mosh pit of public opinion, where words are the battle swords of choice and used to strike down half-grown ideas or stab other individuals in the back. People will cling to that number and use it to support their rage. 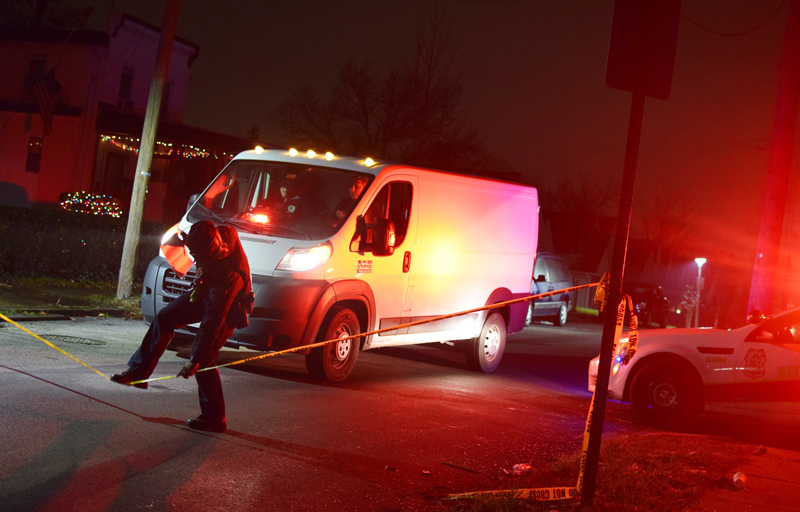 By the time the first day of the new year rolls around, there will have been more than 330 murders in the 365 days it took to create the mayhem that was 2020. Only six years ago, prior to the federal government sweeping in with new solutions to fix the police department’s civil rights problems, prior to the protests that reverberated across the city in the aftermath of the tragic and controversial death of Freddie Gray, and prior to the April 2015 riot that rocked the city, the annual number of homicide investigations was closer to 200. But that number is not where the storm’s damage will show. Its presence is in the patterns. It’s in the repeated commercial breaking and entering crimes and the constant theft of small-store ATMs, which eventually resurfaced in various parks and golf courses but led to few arrests. It’s in the police department’s inability to curtail patterns of violence, like the kind that rattled three neighborhoods in southwest Baltimore in December In the span of sixteen days in one section of the city, there were five shootings, four people were killed, three homicide investigations were opened into their deaths, and there were the shooting-at incidents—one that surprised a delivery driver and another that injured a 10-year-old kid. Over in west Baltimore, at the Gilmor Homes public housing units, there were two deadly shootings on the premises of the multi-family residential complex and one on a street that cut through it. The previous year, there hadn’t been any fatal shootings at the affordable apartments for homicide detectives to investigate. 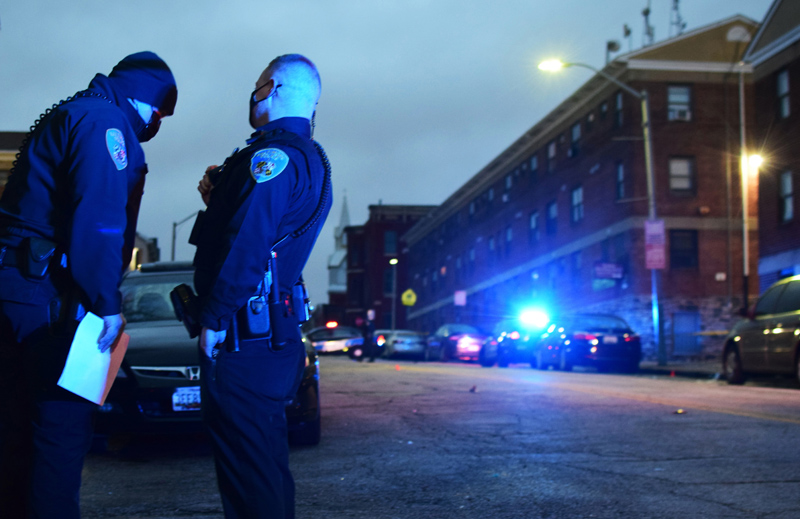 In the end, in the last days of 2020, amid unexpected quarantines and the usual collateral chaos, Baltimore’s crime sleuths, some of which had fallen ill with the virus, were left feeling frayed by uncertainty and department politics. One of them was even actively seeking better leadership. “The @BaltimorePolice is SILENT on the good deeds our police officers effect every day.” Homicide Detective Sgt. Bob Cherry said in a social media post on Twitter on Dec. 28. “Where is our PIO? Where is our Police Commissioner? Where is @MayorBMScott? And more important, where are our COVID-19 vaccinations? We have been working NON-STOP since early 2020.” He also noted that the police department’s commanders were afraid to speak up while its public information officers were politically driven. “Let’s Fight Violence...and Let’s Start with CHANGE in the @BaltimorePolice,” he said. Cherry had been a part of the team of detectives tasked with solving the deadly shootings that occurred amid a string of violence that shook the residents of southwest Baltimore. On Dec. 20, he was standing in the cold and shining his flashlight on the various pieces of evidence scattered across around a car that once served as a temporary shelter for two women before they were gunned down. The previous year, on nearly the same day, he had been across the city standing in the cold and shining that flashlight on a car parked outside of a beauty salon in which a young woman had been shot and killed. For him, the cycle hadn’t changed; the threat of the coronavirus had only made it more dangerous.