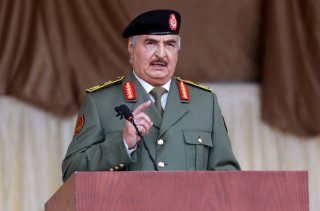 After years of murder and misery, long-suffering Libyans finally have a ray of hope: the Paris Conference on Libya, scheduled for November 14, 2021.

America’s support for the Libyan peace process is strongly signaled by the presence of U.S. vice president Kamala Harris. Her attendance means that the White House is paying attention and also that the administration is setting the stage to take credit for what may be an historic achievement—ending the civil war that has attracted legions of foreign mercenaries and slaughtered tens of thousands of Libyans.

“We want to show our support for the Libyan people as they move toward national elections and as they focus on the importance of the withdrawal of foreign forces and mercenaries," White House officials said.

America pushed for national elections and the expulsion of foreign fighters and it prevailed on both counts. National elections are now scheduled for the end of December 2021 to replace an interim government in Tripoli led by Prime Minister Abdul Hamid Dabaiba. Also, the interim government has asked all foreign military forces, in particular the mercenaries affiliated with Turkey and Russia, to leave Libya before those elections. While Libyans may be able to decide their future in a free and fair election at year’s end, it is unlikely that the Turkish and Russian-backed forces will exit without additional pressure.

Like Caesar’s Gaul, Libya is divided into three parts. In the east—between Benghazi and the Egyptian frontier—sit Gen. Khalifa Haftar’s forces. They have repeatedly tangled with Libyan Arab Armed Forces, the nation’s official army, and the periodic gun battles have deterred rebuilding efforts and demoralized the population.

In the west, a motley mix of Russian-funded mercenaries, Turkish-backed paramilitaries, nascent Islamist militias, and tribal warlords are fighting for dominance.

In the center, Haftar’s soldiers control large swaths of land while the central government holds sway in many cities and large towns.

Another year of war will not change this painful, political geography. What’s heartening is that most of the partisans in this civil war seem to realize that basic fact. Hence the Paris peace conference. The key challenge ahead is managing the election and the peaceful transfer of power, both scheduled to occur in the coming months.

A first step is demilitarizing the jagged frontline in this east-west civil war, the central lands nominally controlled by the official government. Here, Haftar, whose forces still control most of eastern and central Libya, has surprised many observers by endorsing a new government and the coming elections. This suggests the general sees an opportunity: although he was in danger of being marginalized after a stinging defeat last year, both he and the central government know that any new government will need the general’s support to be successful. While Haftar’s endorsement may be to his own political advantage, it is also to his nation’s advantage by bringing peace one step closer.

Haftar, a former resident of northern Virginia, still sits astride oil terminals, with enough firepower and political sway to thwart any plans for peace.

His role in partially lifting an oil blockade in 2020 shows that he remains a linchpin in eastern Libya, where he has built up a security apparatus over the past six years.

Striking a deal with Haftar would probably help secure Libya's stability and strengthen U.S. influence in the region. It would also give Vice President Harris a winning hand at the Paris conference.

President Joe Biden likes to say that “America is back.” In Paris next week, the Biden administration should act to give hopes to millions of Libyans who yearn for a better life

Ahmed Charai is a publisher of The Jerusalem Strategic Tribune. He is on the board of directors for the Atlantic Council, an international counselor of the Center for Strategic and International Studies in Washington, and a member of the Advisory Board of The Center for the National Interest.