Is Nonviolent Resistance Against the Taliban Possible? 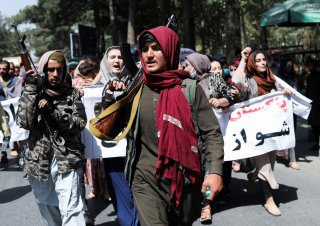 It is a dark age for Afghanistan. The reemergence of the Taliban twenty years after its initial defeat has brought back a totalitarian regime, leaving the country with an unsuccessful peace process, failed state, humanitarian catastrophe, the deprivation of rights, and an unprecedented rise in ethno-cultural injustice. Despite the twenty-seven years of lived experience with the Taliban, there are many misunderstandings about the group. It is important to note that the Taliban is not just like any other authoritarian government. It is neither a single-party system, a traditional monarchy, nor a military dictatorship. Instead, it is an absolute religio-tribal totalitarian regime.

Immediately after it seized Kabul in August 2021, the Taliban received a proactive, nonviolent pushback from women, civil servants, and human rights activists. I have described this elsewhere as steady, sporadic, and spontaneous. Another common pattern of passive, nonviolent resistance in Afghanistan has been the mass exodus of the country’s non-Taliban citizens, which first took place in 1996 during the Taliban’s initial period of rule. It is now happening again. During the last seven months of Taliban rule, millions have left the country, and many more will escape as the Taliban’s rule becomes harsher. But unlike in the 1990s, resistance to the Taliban has not remained limited to a passive exodus of the non-Taliban from Afghanistan.

A successful long-term, nonviolent movement, however, should neither be submissive, sporadic, nor spontaneous. Indeed, those carrying out nonviolent resistance to the Taliban should abandon a simplistic understanding of passive resistance and instead adopt political defiance as an approach.

Second, while nonviolent resistance entails noncooperation with the autocratic or totalitarian regime, the secular ideologues of the Taliban consistently suggest cooperating with the regime. Nonviolent resistance does not allow even the acceptance of the regime; it instead aims to overthrow and disintegrate it. Unlike political defiance, cooperation with a totalitarian regime like the Taliban creates obedience. Obedience in turn facilitates the sustainability of totalitarian rule, helping convert the citizens into submissive, atomized individuals who lose their self-confidence and do not dare protest. Historically—be it colonialism, apartheid, or racism—nonviolent resistance has aimed to overthrow the hegemonic and discursive order under these regimes. The same shall go for the nonviolent resistance against the Taliban regime. Beyond being organized, nonviolent resistance must present a plausible alternative to the ideology and institutional infrastructure of Talibanism. In other words, to borrow from Gramsci, it must produce and articulate counter-hegemonic discourse based on the cultural pluralism and rich history of the land.

Third, nonviolent resistance should now move beyond its initial stage of sporadic and spontaneous resistance. Instead, it should adopt a more strategic approach that addresses key questions such as the issues at stake with the Taliban, the effectiveness of various tools of nonviolent resistance, and whether and when to negotiate with the Taliban. Gene Sharp, a political scientist who had extensive influence over the nonviolent movements, has given a conscious warning to democrats on the prospects of negotiations with dictators. He argues that when the stakes of the issues are very high or there is a power asymmetry between the democrats and the dictators, negotiations can be a trap that the democrats must be cautious of. He argues that a “halt to resistance rarely brings reduced repression. … Resistance, not negotiations, is essential for change in conflicts where fundamental issues are at stake.” The issue at stake with the Taliban is both cultural and political. Hence, both the cultural and political forms of nonviolence are crucial. On the other hand, as the people of Afghanistan are suffering from the economic crisis, nonviolent economic actions—such as strikes, boycotts, and hunger strikes—may not be effective. Similarly, government strikes and boycotts of the civil service may not work, as the Taliban could easily replace protesters with its loyalists in the bureaucracy. With this in mind, the effective approach to resistance is the one that targets the weakness of the totalitarian regime and identifies the strengths of the people.

Fourth, the mandate of a political defiance movement does not end with disintegrating the totalitarian regime. Rather, the policy of political defiance shall be aimed at reestablishing a democratic order. This cannot be done by elevating the corrupt political elite to leadership or moving toward an elite-centric agenda. As a totalitarian regime directly assaults the autonomous institutions of the society, political defiance in Afghanistan must revive and establish civic institutions, which strengthen society to stand up against the regime. This will increase the capacity of people to resist the regime for longer.

Fifth, nonviolent resistance is a breath-taking exercise. While the aim is to reduce suffering, resistance itself has great costs. Fighting for liberation and the disintegration of a totalitarian state involves pain, suffering, and risks. However, resistance should avoid any form of hatred; nonviolence is fighting hatred without detestation. Hence, the ultimate end of nonviolence is not avoiding suffering but prohibiting hate, especially ethnic or racial hate. Therefore, nonviolent resistance against the Taliban cannot be sentimental, and any belittling or personal attacks cannot be allowed.

For Afghanistan, resistance in general, and nonviolent resistance in particular, should function as praxis to maintain fundamental freedoms, democratic aspirations, and the recognition of diversity in Afghanistan. It should not hesitate to articulate its ideas and struggle to convert them into norms. Simultaneously, the resistance must step forward to actively practice them. The political defiance of the last few months has had payoffs. Many pro-Taliban apologists have shifted their positions and now criticize the Taliban. This has been caused by consistent protests, both on the ground and on social media, which have increased the cost of supporting the Taliban.

Nonetheless, the Taliban and its secular ideologues present a complicated challenge. This challenge precludes any easy and ready-made solutions. Rather, it requires a strategic approach to mobilize the people and create synergies between different strata from within the democratic constituency.

Omar Sadr is a Research Scholar at the Center for Governance and Markets, University of Pittsburgh.