The Russo-Ukrainian War of Attrition: How Will It End? 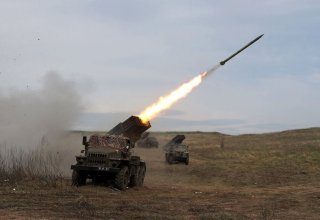 Russian president Vladimir Putin appears to have initially calculated that the Russian invasion of Ukraine which he launched in February 2022 would quickly result in the surrender or even downfall of the Zelenskyy government. This did not happen due to fierce resistance on the part of Ukraine and large-scale Western (especially American) arms transfers to Ukraine. Six months on, the war has become a grinding war of attrition. As Ukrainian president Volodymyr Zelenskyy acknowledged, Russian forces occupy approximately 20 percent of Ukrainian territory. But while Western-backed Ukrainian forces may prevent the Russians from making further advances, Kyiv appears unlikely to be able to push Putin’s forces back over the border into Russia either. Neither side, though, seems ready for a ceasefire, and so the war continues on—perhaps for months or even years.

Eventually, though, wars do come to an end. How might this one do so? It is possible that despite the difficulties it is facing now, Russia will somehow manage to turn things around and achieve its original aim of forcing the surrender or downfall of the Zelenskyy government. On the other hand, Western-backed Ukrainian forces may somehow push the Russians out of much, if not all, of the territory that they previously captured.

Wars, however, do not necessarily end with one side militarily defeating the other. There are other ways that wars of attrition can end, such as internal collapse due to the exigencies of the war (as occurred in Germany at the end of World War I) or neither side being able to prevail over the other after years of fighting and both being willing to accept a ceasefire due to the unacceptably high costs of the war continuing to each (as occurred in the 1980-88 Iran-Iraq War). Indeed, if—as seems likely—neither Russia nor Ukraine can prevail militarily over the other any time soon, the war between them will go on until either one side collapses or each gives up its attempt to defeat the other.

How, then, might a war of attrition between Russia and Ukraine lasting months or even years play out? What are each side’s strengths and weaknesses in a long-term conflict which make it more likely to avoid being the loser, even if it cannot triumph as the winner?

As we have seen, Ukrainians have been willing to fight tenaciously in defense of their homeland and have a president who has been willing to lead them in doing so. Although not as large or as powerful as the Russian forces they are fighting against, Ukrainian forces have benefited from large-scale Western (especially American) military assistance enabling them to tie Russian forces down and disrupt their advance. Without this continued supply of Western weapons, though, it is doubtful that Ukrainian forces would be able to prevent Russia from marching across as much of Ukraine as Putin wants even if this incurs high casualties among Russian forces (which Putin seems willing to accept).

While Russian forces have experienced significantly higher losses in men and materiel than Ukraine, Russia still possesses great quantities of weapons. Nor does Putin seem likely to be overthrown as a result of the ongoing stalemate in Ukraine. Indeed, much of the Russian public still supports Putin and the war against Ukraine. But unlike in Ukraine, where the public is well informed about the course of the war, the Russian public has been largely kept in the dark about the Russian armed forces’ poor performance or the high level of casualties they have been experiencing. In fact, even calling the war a war is a criminal offense in Russia. The longer the war drags on, though, the more likely it seems that the Russian public will be negatively impacted not just by Western economic sanctions but by the growing loss of loved ones in the war by families throughout Russia. Putin may soon face a difficult choice between instituting a full-scale war-time mobilization in order to obtain more men for the war effort—at the risk of instigating domestic opposition—or choosing not to do so—rendering him unable to bring the war to what Putin would consider to be a successful conclusion.

In a war of attrition, what matters is which side can hold out longer than the other. For Ukraine, the biggest question mark is whether and how long the West will continue to support it. Both Western sanctions and Russia’s own reduction of gas supplies to Europe have resulted in much higher energy prices which are negatively affecting European publics. If the economic pain for them grows bad enough for long enough, they may elect political parties who insist on accommodating Russia. American assistance to Ukraine, of course, could continue, though this would be more difficult to provide without at least some European cooperation. On the other hand, if American assistance to Ukraine fell sharply or ended, it is doubtful that European countries could or would sustain Ukraine against Russia on their own. Putin may hope that if Russian forces can hold out in Ukraine through 2024, the return to the White House of Donald Trump—who is notoriously sympathetic toward Putin and hostile toward Zelenskyy—might lead to the decline or end of American support to Ukraine and so enable Moscow to prevail against Kyiv.

Whether Trump will be re-elected or behave as Putin might hope, of course, is by no means certain. But Putin, for his part, may not be able to hold out long enough to find out. Continued Russian losses in Ukraine and economic hardship for Russians generally could lead to the growth of opposition both within Russian society and, more ominously for Putin, within Russia’s armed forces. If this occurs, Putin may have to redeploy forces away from Ukraine and back into Russia just to stay in power—assuming that those forces remain loyal to him. And should Putin fall from power as a result of removal, incapacity, or death, there is the possibility that even a replacement chosen by him (much less one who is not) might discontinue the war in Ukraine to prevent the Russian economic collapse that Putin has been willing to risk.

It is possible, then, to imagine a scenario in which either Russia or Ukraine will be unable to continue the war against the other. But which of these scenarios will actually occur? It is not yet possible to predict if, much less when, either might do so. It should be noted, though, that American support for Britain and France contributed to the German collapse that ended World War I while Soviet, Western, and Gulf Arab support for Iraq contributed to Ayatollah Ruhollah Khomeini’s decision to stop attempting to bring about the downfall of Saddam Hussein in the Iran-Iraq War. Whether Western, and especially American, support for Ukraine continues may be equally crucial to how the Russian-Ukrainian war ends.