Sanctions Showdown: What Will Saudi Arabia’s Crown Prince Do? 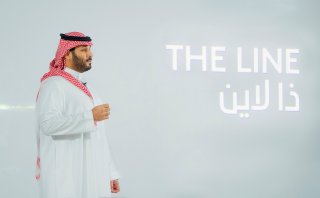 The president imposed a temporary freeze on U.S. arms sales to Saudi Arabia within his first week in office, one of his first major foreign policy actions. Biden took a hard line on Saudi Arabia throughout the 2020 campaign cycle, saying that Washington should work to make Riyadh the “pariah that they are,” also vowing to make it “pay a price” for human-rights abuses.  Four sources “familiar with the administration’s thinking” told Reuters earlier this week that the Biden administration is conducting a comprehensive review of recent arms sales to Saudi Arabia. The results of that review have yet to be publicly revealed, but Reuters’ sources say that the current discussion among White House officials is centered on making a policy distinction between “offensive” and “defensive” weapons. As a congressional aide put it, “They’re trying to figure out where do you draw the lines between offensive weapons and defensive stuff.” Those boundaries are reportedly still being drawn and redrawn, though there are a handful of unambiguous cases. Under the policy currently being considered, air and missile defense units like the Terminal High Altitude Area Defense (THAAD) and Patriot systems would be labeled as “defensive” equipment. Meanwhile, precision-guided munitions (PGM’s) and small-diameter bombs—notably, including the hundreds of millions’ worth of Boeing GBU-39 small diameter bombs that Saudi Arabia sought to procure in late 2020—would be placed in the “offensive” category. Several of Biden’s key allies in the Senate have signaled support for a policy that allows the continued sale of defensive hardware while banning offensive weapons contracts. “We should continue to sell military equipment to our partners in the Gulf, but we should make sure that these really are truly defensive arms,” Democratic Senator Chris Murphy said in a recent speech at the Council on Foreign Relations.

Even if only a partial ban, the prospective policy could cost Saudi Arabia billions of dollars in arms import deals. The potential restrictions threaten a tentative Saudi contract for up to 50 of Lockheed Martin’s F-35 fifth-generation stealth fighters, as well as earlier Saudi efforts to procure over a dozen U.S. armed drones.

News of these proposed reforms comes on the heels of a recently declassified intelligence report on the 2018 killing of Washington Post journalist Jamal Khashoggi inside the Saudi consulate in Istanbul. The report found that Khashoggi’s assassination was triggered by decisions made at the highest levels of the Saudi leadership, assessing that “Saudi Arabia's Crown Prince Muhammad bin Salman approved an operation in Istanbul, Turkey to capture or kill Saudi journalist Jamal Khashoggi.” The report prompted widespread condemnation from U.S. lawmakers, followed by renewed calls to punish Saudi leaders and to rethink U.S.-Saudi relations more broadly. Despite his campaign-trail promises to hold Saudi Arabia accountable for a wide array of human rights violations, Biden has yet to announce significant punitive measures against Riyadh. Sanctions have been imposed on certain individuals involved in the Khashoggi affair, though not on Prince Mohammed bin Salman.

The recent pall cast on U.S.-Saudi relations was not lost on Saudi observers. “America does not have the right to bully a strategic regional ally and it is not in its interest to let domestic differences harm its regional interests and those of its partners,” warned prominent Saudi journalist Khaled al-Malik in the Al Jazirah newspaper. In the same article, Khaled al-Malik suggested that Riyadh can respond to Biden’s potential arms sales restrictions by turning to Russia or China for its weapons import needs.

Former President Donald Trump abstained from imposing punishments on Riyadh over the Khashoggi incident, seeking to safeguard a series of high-profile arms deals negotiated between the Trump administration and Saudi Arabia in 2019 and 2020. Aside from purely financial considerations, Trump sought to cultivate Saudi Arabia as a regional bulwark against the spread of Iranian military influence. As part of the Trump administration’s maximum-pressure strategy against Tehran, the U.S.-supported Saudi Arabia in its ongoing war effort in Yemen against Iran-backed Houthi rebels.

Biden is confronted with a similarly fraught Middle-Eastern landscape. Though he does not intend to follow his predecessor’s maximum pressure strategy, his recent decision to order a retaliatory strike against Iran-backed militants in Syria sends a signal that he is willing to pursue punitive military measures against Tehran. A sudden severing of the longstanding U.S.-Saudi defense partnership could harm U.S. leverage vis-à-vis Iran ahead of potential negotiations to revive the Joint Comprehensive Plan of Action (JCPOA), also known as the Iran nuclear deal. It would likewise affect Washington’s broader strategic standing in the Middle East, potentially opening a regional vacuum to be filled by U.S. competitors.

The Biden administration is treading lightly against this complex geopolitical backdrop, seeking to balance human-rights issues and local military disputes against its overriding goal of preserving the U.S.-Saudi security alliance in some form. “The aim is a recalibration, not a rupture,” a senior Biden official told the Washington Post. “We’ve been very clear with the Saudis that this is an historic partnership; it’s lasted for 75 years. But the reality here in the United States and in Washington, is that the Saudis have lost both political parties . . . so that’s why we want to reset the foundation of this partnership.”