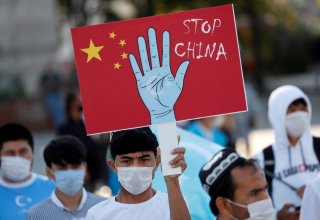 The People’s Republic of China and its communist dictator Xi Jinping often depict their country as united and monolithic, even though in reality it is anything but. As Xi doubles down on efforts to overturn the post-World War II liberal order, however, perhaps it is time for American policymakers to take off their gloves, think outside the box, and consider that China’s façade of unity might harbor vulnerability that enables new strategies.

The United States was not always so deferential to its adversary’s unity. Consider the Soviet Union: The United States never formally recognized the 1940 Soviet absorption of the Baltic States—Estonia, Latvia, and Lithuania. After Imperial Japan seized Manchuria, Secretary of State Henry Stimson declared that the United States would not recognize territorial changes executed by force. Based upon the Stimson Doctrine, Presidents Dwight Eisenhower, Jimmy Carter, and Ronald Reagan each allowed a chargé d'affaires loyal to free Lithuania to staff the Lithuanian embassy in Washington, DC. President Lyndon Johnson allowed a Latvian diplomat to run the country’s legation in New York City. The United States likewise hosted an Armenian embassy in Washington until 1933, thirteen years after Russian invaders ended Armenia’s independence.

In 1959, Congress designated Armenia, Azerbaijan, and Georgia as “Captive Nations.” In the aftermath of World War II when it became clear that Joseph Stalin was no ally, the United States did support violent resistance movements in Eastern Europe and the Soviet Union. The Soviets ultimately penetrated these programs so completely that they achieved nothing other than getting the U.S.-supported agents captured or killed. The Reagan administration also briefly debated—but quickly shut down—proposals to turn the Soviet invasion of Afghanistan on its head and incite rebellion among the Soviet Union’s Muslim population.

China, of course, is not the Soviet Union. The Soviets relished the image of ethnically and linguistically diverse republics united upon a common idea. The People’s Republic of China, in contrast, depicts itself as a homogenous nation-state representative of all Chinese. This self-description, however, is nonsense. Taiwan has been under mainland China’s control for less than two decades over the past four hundred years. While Qing rule may have lasted longer in theory, in reality, its grasp was weak. Hong Kong, too, has developed a separate identity that, despite Beijing’s abrogation of its treaty commitments, continues despite the best efforts of Chinese communists to crush it. Historically speaking, however, perhaps the most distinct regions in mainland China are East Turkestan (or Xinjiang as China calls it) and Tibet. Here, the United States may not be able to support full-blown separatist movements, but a reconsideration of Chinese sovereignty could provide new opportunities.

Xinjiang is today in the news as the site of a Beijing-sponsored genocide against the Uyghur people. Chinese repression of the region is not new. The Qing Dynasty consolidated control over much of what is now Xinjiang in the eighteenth century when it conquered the largely Buddhist Dzungar Khanate and accepted some local Muslims leaders as vassals. After a campaign that killed perhaps one million Dzungar, Qing rulers moved to populate the resulting empty land with Han Chinese along with Hui and Uyghur Muslims. The region went through various iterations, including a short period in the latter half of the nineteenth century when Yaqub Beg, a commander originally from Kokand (in present-day Uzbekistan) conquered the region and established Yettishahr, his own short-lived state, with Kashgar as his capital. In 1877, the Qing Dynasty reconquered the area, although it ceded the more northern Ili region to Russia. In 1884, the Qing made Xinjiang a formal province. It was not always a happy marriage. In November 1933, for example, Uyghur separatists declared the Turkic Islamic Republic of East Turkestan based in Kashgar and its environs. The would-be state existed for just five months before a Chinese reconquest. A decade later, the Soviet Union backed a second East Turkestan Republic in northern Xinjiang. This time, the Uyghurs maintained their autonomy for five years before Chinese forces—now under Mao Zedong’s control—re-established Chinese control. In the decades since, Chinese leaders have accelerated the transfer of Han Chinese into the region and the subjugation of the Uyghur Muslim minority.

Xinjiang was not alone. Tibet is an even starker example of Chinese colonial conquest. Qing Dynasty encroachment began in 1720. When the Qing Dynasty was strong, it could influence if not dominate the Dalai Lama’s rule. As the Qing Dynasty weakened through the nineteenth century, Tibet was functionally independent. It became a focal point of great power rivalry toward the end of the century as both Russia and the British scrambled for strategic position in Asia. It was against this backdrop that the Qing also made their move and, in 1910, toppled the Dalai Lama. The 1911-12 Xinhai Revolution toppled the Qing. The new Republican government apologized and offered to restore the Dalai Lama. He refused to subordinate himself to Chinese rule and declared Tibetan independence, a move the Mongolian government recognized. He, several regents, and the fourteenth Dalai Lama continued to rule Tibet as an independent country. In 1950, Chinese communists invaded Tibet, imposed an agreement that subordinated Tibetan autonomy to Chinese sovereignty and, within a decade, forced the Dalai Lama into exile in Dharamsala, India. Over subsequent decades, the Chinese government has undertaken a campaign of cultural eradication. During the Cultural Revolution, for example, Chinese communists dynamited or otherwise destroyed more than 6,000 Tibetan monasteries; the few that survived were transformed into de facto museums. Han colonization continues to this day.

Is Support for Separatism the Answer?

Should the United States support separatism among the Uyghur and Tibetans or seek to exploit other ethnic fault lines? There is precedent for American support for Tibetan separatists. In the 1950s, the CIA helped train Tibetan agents and air-dropped supplies into the captive nation. Ultimately, the assistance fizzled out because the government-in-exile remained more committed to autonomy within the People’s Republic of China than independence. A new Dalai Lama, however, might take a different position in the coming years. The grim reality, however, is both decades of Chinese demographic warfare and China’s totalitarian apparatus have eviscerated opportunities for freedom movements in both Tibet and Xinjiang. Certainly, this might change should China—already facing a demographic precipice—devolve into civil strife or chaos. Autocratic dictatorships like China’s, after all, are better at denying festering problems than they are at resolving them. China’s botched response to Covid-19 is simply the latest case in point. In The End of the Asian Century, Hoover Scholar Michael Auslin laid out convincing scenarios that could lead to China’s implosion.

At present, though, military and financial support for separatism would not succeed and could backfire. There are, however, other options. The American Enterprise Institute’s Michael Mazza suggests that the State Department could simply revisit the question of sovereignty over Tibet. Consider it a revival of the Stimson Doctrine. Just as the United States sponsors an American Institute in Taiwan as a de facto embassy in Taipei, Mazza notes that it could be time for an American Institute for Tibet in Dharamsala, at least if the Indian government is willing to play ball.

The State Department might also envision an enhanced status for the World Uyghur Congress. While not separatist, the Congress does advocate for Uyghurs to determine the political future of East Turkestan. Washington might also welcome direct political representation for Inner Mongolia and advocate against its further colonization.

Simply put, China is more an empire than a nation-state, and empires collapse. There is no reason why the United States should not put pressure on its internal seams. Beijing might cry foul but, in decades past, the Chinese Communist Party did not hesitate to seek to exploit the Black liberation movement in the United States for Beijing’s gain. Not only the State Department, but also the White House and Congress should focus attention on dissidents and activists in Xinjiang, Tibet, Inner Mongolia, and Hong Kong to increase their prestige. The Chinese Communist Party might seek to repress them, but younger Chinese especially seek to escape the information bubble China imposes, and so American news reports about local activists can matter.

After decades during which China’s talk and its walk diverged, Beijing may believe it has defined the parameters in the bilateral relationship. After the Anchorage Summit, it is clear that Beijing does not take the Biden administration seriously. The virtual summit between President Joe Biden and Xi and a potential Biden visit to Beijing in February 2022 will not change this. Rather, it is time for Biden—or the next administration—to shake up the rules of the game if they hope to check China’s frontal assault on the post-World War II liberal order.