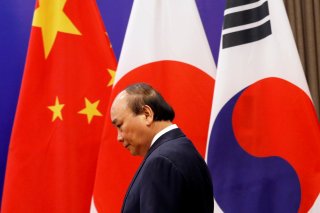 In its relations with Asia, the Biden administration is trying to accomplish three feats at once. It wants to complete the “pivot to Asia” of the Obama-Biden years, build stronger partnerships, and emphasize shared democratic values. Little tension exists among these three goals in Northeast Asia, where Japan, South Korea, and Taiwan are enduring American allies as well as established democracies. But in Southeast Asia, where democratic partners are painfully hard to come by, how can these goals possibly be reconciled?

From afar, Southeast Asia might look like ground zero in a twenty-first-century struggle between democracy and dictatorship. China’s footprint in the region has been growing while America’s influence has been receding. Southeast Asia seems to sit precisely at the turbulent confluence of U.S.-China rivalry and global competition between democratic and authoritarian rule.

Up close, Southeast Asia looks like nothing of the sort. The region is ablaze with the coronavirus and awash in autocracy. This makes it a difficult place to find democratic partners to work with, much less showcase Biden’s argument that democracies will prove their advantages for good governance over authoritarian regimes in the years to come. In one corner of Southeast Asia, the fragile democratic experiment in Myanmar that began in 2011—a rare democratic advance coinciding with the Obama-Biden years—has collapsed in another bout of brutal military rule. In another corner, Southeast Asia’s largest democracy, Indonesia, is struggling so mightily with coronavirus that neither Defense Secretary Lloyd Austin nor Vice President Kamala Harris has been able to place the pivotal country on their Southeast Asian summer itineraries.

Tellingly, the only two countries both Austin and Harris have included on their summer tours are not democracies at all: Singapore and Vietnam. In both places, America is not partnering with democracies, but with dominant parties that have ruled uninterruptedly, and practically unchallenged, since the 1950s.

Yet some authoritarian regimes make more sensible and defensible partners than others. And Singapore and Vietnam both abundantly qualify. When commanded by ruling parties rather than dominant militaries or personalist cults, as is the case in both Singapore and Vietnam, authoritarian regimes can often enjoy considerable domestic legitimacy. They can also produce impressive development outcomes and offer reliable partners in upholding a peaceful international status quo.

Against the Democratization Grain

Unlike Northeast Asia, Southeast Asia has never been fertile democratic terrain. The region’s democratic nadir came from 1976-86 when Southeast Asia hosted not a single democratic regime. That dark decade for democracy was ushered in by a brutal coup in Thailand. History may well prove Myanmar’s recent coup to be the start of a similarly dark spell in the 2020s.

Even the end of the Cold War didn’t bring democratic gains. The year was a coup in Thailand (which was reversed) in 1991 and there was one in Cambodia (which still hasn’t been) in 1997. Popular movements to topple dictators in the Philippines and Indonesia followed their own national rhythms, not the world’s rhythms. Arising in 1986, “People Power” in the Philippines arrived early. Erupting in 1998, “Reformasi” in Indonesia came late. If those two countries have followed any global trend at all, it has been the trend toward democratic backsliding and erosion during the 2010s.

The darkest recent trend in Southeast Asia, again somewhat against the global grain, has been the reemergence of outright military rule. Myanmar is the most flagrant example since its coup in February. Thailand’s military has made only halting and partial steps toward sharing authority with elected civilians since its most recent coup in 2014. In Indonesia and the Philippines as well, elected civilian presidents are relying ever more on the military for muscle against their opponents. Legacies of military politicization under old authoritarian regimes loom large in both places.

Southeast Asia is also home to authoritarian regimes where ruling parties, rather than ruling militaries, command the stage. Hun Sen’s Cambodia becomes more politically closed all the time, after three decades in power. Malaysia seemed to be taking decisive democratic steps in 2018 by voting out its long-ruling party, but the old guard was never displaced and appears poised to make a comeback. And then there are Singapore and Vietnam: the two longest-lasting authoritarian regimes in Southeast Asia, and the two key targets in the Biden Administration’s regional charm offensive.

This clearly presents a challenging political ecosystem for the Biden administration to find democratic partners. And yet the new president is adamant about putting democracy on America’s front foot. So why prioritize Southeast Asia’s two longest-lasting authoritarian regimes, of all possible partners, for special attention?

There are two main reasons, neither of them hard to fathom. One is that all the autocracy and coronavirus spreading through the region left the Biden administration with few alternatives. Indonesia would have been an obvious stop for both Austin and Harris were it not for the coronavirus. Thailand would be an obvious stop too were it not for its latest outbreak of repressive military rule. After all, it is a U.S. treaty ally. And the Philippines would have been the most obvious stop of all, were it not for its combination of spreading the coronavirus and a president prone to greeting Americans with tongue-lashings rather than breeze-shooting.

The second reason is simple geopolitics, devoid of normative trappings. Singapore and Vietnam are the two countries most interested in seeing America play a revitalized role in Southeast Asia, and least afraid of saying so openly without fear of domestic blowback. For Vietnam, this embrace of America is largely about countering China. For Singapore—which, like almost all Southeast Asian countries, generally welcomes China’s growing role as a major economic player in the region — it is mostly about keeping the old, open, bustling Asia-Pacific economy stable and humming.

There will be no opposition blowback to embracing America in either country because neither country’s ruling party faces a strong opposition to begin with. This is the most obvious feature Singapore and Vietnam have in common, despite the very different ways those ruling parties came to power. The Vietnamese Communist Party (VCP) had expelled the French by the mid-1950s and the Americans by the mid-1970s. It is the consummate revolutionary regime. Singapore’s People Action Party (PAP) first won elections in 1959, then expelled its leftist faction in the early 1960s, and has won landslide electoral victories as a conservative authoritarian regime ever since. It is the paradigmatic counterrevolutionary regime.

These differing origins have produced some lasting differences. Vietnam no longer has a socialist planned economy, but it is still a single-party regime. While most single-party regimes became multiparty systems with competitive elections after the Cold War, Vietnam did not. Singapore has always been a multiparty system, but only the PAP ever wins any power. Party opposition and independent civil society are legally permitted but also tightly curtailed. Neither the VCP nor PAP faces an opposition that could possibly replace it, or even criticize its tightening embrace with Washington in ways that might give it any headaches. The same cannot be said for Southeast Asian countries where political opposition and anti-American sentiment are both far stronger, such as Indonesia and Malaysia.

Singapore and Vietnam’s ruling parties are as similar in why they rule as in how they rule. Both are steadfastly committed to political stability and national economic development, above all else, and at whatever cost to political and civil liberties. Naturally, this also means securing their own incumbency; but this is not all it means. The main reason Singapore and Vietnam face no meaningful internal opposition is not because they have been exceedingly repressive, as authoritarian regimes go. They rule unchallenged because they have been highly successful at bringing both peace and development to countries that used to sorely lack it: Vietnam during its long wars from 1945-75, and Singapore during its tumultuous decolonization period from 1945-65. More than anywhere else in Southeast Asia, ruling parties in Singapore and Vietnam have secured a national monopoly on political legitimacy.