A Temporary Pause, But No Solution on Ukraine 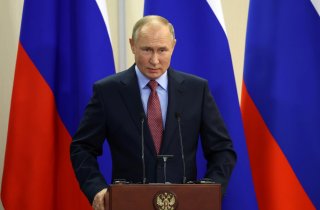 The video summit between Presidents Joe Biden and Vladimir Putin appears to have eased the steady decline in U.S.-Russia relations precipitated by the mobilization and deployment of Russian forces over the last several weeks in its southern and western military districts abutting the border with Ukraine. Stripping through all the verbiage of the readouts of the call, as well as the efforts by both sides to “spin” the results, we have a temporary solution in place: an implicit Russian commitment not to use force and to engage in diplomacy, an equally implicit U.S. pledge not to pre-emptively deploy damaging economic sanctions against Russia and a similar commitment to urge Ukraine to also be more constructive in finding a diplomatic solution. Alongside the main summit are other arrangements—what appears to be a German commitment to shut down Nord Stream in the event of a Russian incursion into Ukraine, but the elimination of any language imposing mandatory U.S. sanctions on Russia in the final draft of the defense authorization bill.

The fundamental question, however, is left unaddressed. The United States will not give binding and overt guarantees that the process of democratic enlargement as represented by the expansion of the NATO alliance has ended, while at the same time the United States and its allies continue to declare that Ukraine is not yet ready for a membership action plan.

Biden’s video summit today is the culmination of a vote that he—and other senators, among them Barack Obama and Hillary Clinton—cast in 2007, in a piece of legislation signed into law by President George W. Bush. As a matter of U.S. law, the United States is committed to assisting Ukraine (as well as Georgia) in its quest to join the alliance. As long as Ukraine indicates its desire to join, the United States, by law as well as stated policy, is bound to help facilitate that choice. For the last fourteen years, this has meant that compromise proposals that countless track-2 dialogues have proposed—and advocated for, in these very pages—finding a way for Ukraine to become an effective “armed neutral” and to serve as a keystone link between Russia and the West—is a political nonstarter, because that would represent a setback for U.S. policy, daresay even a “defeat” for Washington. The only way out for the United States, other than a complete collapse of Russian power that would make Kremlin objections to Ukraine’s accession to NATO meaningless, is for Ukrainians themselves to avow they have no interest in joining NATO.

When Senator Biden became Vice President Biden, the Obama administration attempted a “reset” of its relationship with Russia. That reset foundered until, as I noted in these pages eleven years ago, the election of Viktor Yanukovych shifted Ukraine’s orientation from an “all-out embrace of the Euro-Atlantic world in favor of a more accommodating approach to Russia. The decisions to forgo Ukraine’s attempts to gain NATO membership and to sign a new, long-term lease for Russia’s Black Sea Fleet … removed Ukraine from the chessboard of U.S.-Russia competition …” The United States was thus freed of its obligation to promote Ukrainian membership in NATO because Washington could argue with a straight face that the Ukrainians themselves were no longer interested.

The Maidan revolution and the overthrow of Yanukovych ended that convenient cover story. The interim government, and then the government of President Petro Poroshenko, repudiated Yanukovych’s policy of neutrality and reinstated the policy of seeking membership in Euro-Atlantic institutions. No longer could the United States claim that it was abiding by the will of the Ukrainian people in not supporting Kyiv’s request for membership. And, as in 2008, after the Bucharest NATO summit declared that Georgia and Ukraine would “one day” be members, whereby Russia’s military action against Georgia ended up making Georgia effectively ineligible for membership by removing Tbilisi’s control over 20 percent of its territory), Moscow decided both to seize Crimea and its important military geography for Russia (rather than continue with the lease arrangements from Ukraine) and fomented separatist uprisings to also create territorial disputes to complicate Ukraine’s bid for NATO membership. For the last seven years, Russia has maintained “frozen conflicts” on Ukrainian territory while taking important geo-economic steps, notably with the construction of the new Turkish Stream and Nord Stream 2 pipelines, to allow Russia to completely circumvent Ukraine as a transit country for its energy exports to Europe.

Why the crisis now? A variety of factors. The Biden administration has not been shy in signaling that it intends to reduce its focus on Europe in order to concentrate on the Indo-Pacific. At the same time, it has signaled much without necessarily demonstrating what it would be prepared to do. Nord Stream 2 finished construction, and now awaits final certification—but with the added uncertainty as to what a new German coalition government will do and whether last-minute U.S. pressure might actually succeed in torpedoing the project. And the lessons learned from the 2020 Armenia-Azerbaijan fight was how new technologies deployed on the battlefield can change the balance of forces—and whether, over time, Ukraine might be able to change the military balance. In other words, the conflict, never completely frozen to begin with, given the ongoing incidents along the lines of control, was starting to heat up even more.

We can be cautiously optimistic that the Putin-Biden call may have put the conflict back in the icebox, for now—but the fundamental problem remains. All parties are locked into a zero-sum approach. The United States is never going to formally abandon its commitment to Ukrainian membership in NATO. Russia will resist this as long as it has the wherewithal to do so. The central Ukrainian government understands that complete adoption of the Minsk proposals with the partial devolution of power to the Donetsk and Luhansk republics would have the same end result as the devolution of power to the units that make up Bosnia: giving those entities veto-power over Ukraine’s foreign policy decisions (and giving Moscow a back door into Ukrainian decisionmaking). So the deadlock persists—until the next crisis point is reached.