Trump Was Right to Question the Carter Doctrine, Biden Should Too 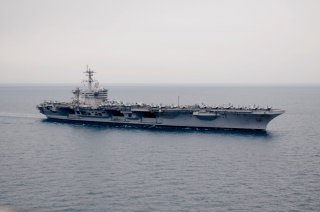 Assuming General Lloyd Austin receives his waiver and is confirmed as Secretary of Defense, and that Kathleen Hicks and Colin Kahl assume the next two spots within the Pentagon, the new Biden defense team—especially given the Middle East experience of both Austin and Kahl—will need to take a long, hard look at U.S. priorities and posture within the region.

Given the outsized importance that “Central Command” (CENTCOM)—the geographic combatant command which covers the Middle East and North Africa—has played in U.S. national security over the last two decades, my students at the Naval War College are sometimes surprised to find out how recent—in bureaucratic terms—CENTCOM was created. Until the creation of the rapid deployment task force in 1980 and the formal creation of CENTCOM in 1983—under the auspices of the Reagan administration—the Middle East was divided between America’s long-established European and Pacific commands. This changed only with the promulgation of the Carter Doctrine (and subsequent Reagan corollary) which raised the Middle East—specifically the security and safe transit of the Persian Gulf’s energy resources—to being of equivalent importance as the defense of the U.S. homeland.

Given the situation in the 1980s, not least of which was the Cold War with the USSR, this made strategic sense. In recent years, however, economic, technological, and geopolitical changes have eroded the strategic foundations of positions. In January 2020, President Donald Trump even signaled that the Carter Doctrine might no longer be operative, given those shifts.

At first glance, we might assume that a Biden national security team will automatically reverse any Trump-era departures from the U.S. national security status quo. But three trends that are likely to gain momentum during Biden’s tenure in office will continue to call into question the future utility of the Carter Doctrine.

The first is the longer-term impact of the Abraham Accords. With the normalization of relations between the UAE and Israel, the basis is being laid for the creation of a new energy infrastructure and economic corridor across the Arabian Peninsula to the Mediterranean Sea. Combined with new energy discoveries in the Eastern Mediterranean, more of Europe’s energy needs could end up being sourced from and delivered via the Mediterranean. This augments existing plans for more of Iraq’s energy—including energy produced in Kurdistan—to be exported westward, also to Mediterranean depots.

At the same time, Iran is exploring ways to deliver its energy to markets both via the Caspian Sea and, more importantly, to connect to the Chinese hub at Gwadar in Pakistan. China is well aware of its energy Achilles’ heel in having vital energy deliveries continue to traverse by sea where, in the event of a dispute with the United States, they could be interdicted. This, of course, has been the basis of the Russia-China energy relationship, but as China deepens its engagement with Tehran, it is also looking for “safer” overland routes.

So, by 2030, a growing percentage of the energy produced from the Persian Gulf basin may not be transiting the sea routes of the Persian Gulf. Keeping that waterway secure and open will remain a vital interest, but a lessened one. But the United States will need to pay much more attention to ensuring a stable balance in the Eastern Mediterranean, and particularly to ensure that energy sources and supply lines that cross Cyprus’s maritime zone remain secure and open.

Indeed, the United States—as well as the European Union—received an important wakeup call this past fall, as tensions boiled over in the Eastern Mediterranean, especially between Greece, Turkey, and Cyprus. Keeping this region on the proverbial “back burner” to focus on other parts of the Middle East may not be feasible in coming years if the energy security of the Euro-Atlantic community—including the U.S. stated interest in reducing Europe’s dependency on Russia—will rest on a complicated balancing act between Egypt, Israel, Lebanon, Cyprus, Turkey and Greece.

The second change is the likely push by the Biden administration to encourage continued shifts away from the use of hydrocarbons in general. Rhetorically, at least, the new administration seems to be committed to the vision sketched out by former National Security Advisor Robert McFarlane fifteen years ago in these pages for a twenty-year transition to new sources of fuel. Moving “beyond petroleum.” As McFarlane noted, such a strategy prioritizes different regions of the world away from the Middle East.

Finally, we have the ongoing transformation of extremist movements from being geographically-centered organizations with physical roots in specific countries towards diffused cyber networks which pass along training and instructions without the need for face-to-face gatherings. The continued shift towards Al Qaeda 2.0 and cyber caliphates means that some of the counter-terror mission CENTCOM handled increasingly transitions to other entities such as CYBERCOM.

Of course, we also have a high degree of continuity emerging with the Obama national security team, which attempted to “rebalance” U.S. national security priorities away from the Middle East towards the Pacific basin. All of this suggests that the Biden administration will need to start thinking about how it wants to posture the United States in the Middle East—and whether the assumptions of the past will continue to be operative moving forward.