The United States Can Still Be a Leader on Natural Gas 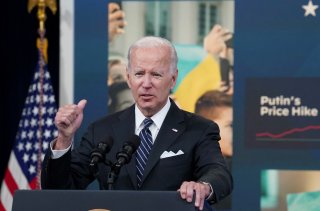 In 2014, the cover of Foreign Affairs magazine was devoted to the newfound American energy renaissance, dubbing it a “Big Fracking Deal.” Already gaining momentum, the shale revolution provided a glimpse of once unfathomable economic and national security prospects. The year that the Foreign Affairs cover appeared also offered a glimpse of the world to come, as Russia annexed Crimea and dispatched its “little green men” to Ukraine’s eastern provinces.

The world has come a long way in the eight years that followed, but much remains the same. The United States, even across two opposing economic and foreign policy philosophies, made innovative strides. However, hindsight would prove them insufficient in light of the present crisis. The United States similarly fell short of preempting Russia’s energy weaponization. In this case, the saying “history does not repeat itself; it rhymes” is truly applicable.

Today, the United States faces a choice. It can either double down on the dynamism of domestic energy or cave to the myopic worldview of climate alarmists. The shale revolution provides a particularly insightful guidebook to breaking the cycle of insecurity.

From Shale Revolution to Energy Independence

Before the shale revolution, natural gas prices closely tracked the price of a barrel of oil despite divergent end-uses — a pricing relationship that carried severe implications for U.S. consumers. However, the ensuing growth in domestic natural gas production shattered this price correlation.

As a result, the U.S. consumer was reassured that natural gas would not experience correlating price spikes during periods of heightened oil volatility, particularly resulting from natural disasters or geopolitical instability. The growth in natural gas supplies, according to the White House Council of Economic Advisers, saved the average American family some $2,500 per year in utility costs.

The Appalachian region provides a historic case study. Between 2014 and 2021, as a direct result of the shale revolution, Pennsylvania’s natural gas production levels increased by 1,231 percent, Ohio’s by 2,820 percent, and West Virginia’s by 940 percent. These states produced a staggering 34.5 billion cubic feet per day (bcf/d) combined in 2021 — nearly half of U.S. consumption. In 2021, U.S. production topped 94.5 bcf/d, while consumption totaled 84 bcf/d.

Deploying red tape as a cover for its climate agenda, the Obama Administration slow-walked LNG export approvals, particularly in the lead-up to Russia’s 2014 invasion of Ukraine. However, after Russia annexed Crimea, Congress, as well as publications including The New York Times and The Wall Street Journal called for the United States to unleash its natural gas as a geopolitical tool in America’s arsenal.

Even at a snail’s pace, the comparative advantage of the United States emerged as many European countries viewed U.S. supplies as reliable, flexible, and price-competitive under long-term contracts. When framing U.S. supplies against Russia’s historic use of energy as a geopolitical weapon, “freedom gas” becomes an attractive antidote.

The emergence of LNG in the European marketplace alone severed the legacy of oil-pegged natural gas contracts biased toward Russia. The shackles of destination and take-or-pay clauses were also broken, allowing for greater market liquidity, flexibility, and cooperation on energy security and market harmonization. The benefits of these transformations, particularly regarding destination clauses, would reach Ukraine, allowing neighboring countries to redirect volumes when Russia halted supplies in 2014.

Measured against Russia’s prolific energy weaponization and a sustained global demand rebound from the pandemic, western political and financial systems unquestionably fell short — ignoring and even contributing to the coming energy crisis.

Organizations like the International Energy Agency (IEA), United Nations (UN), and World Bank and countries like Germany and even the energy-rich United States are all equally culpable, having championed a counter-intuitive definition of energy security, one that simultaneously ignores the realities of energy markets and rests solely on a rapid transition to renewables.

Today, U.S. capabilities to provide relief to European allies, not to mention U.S. citizens, are strained by the pressures of an attempted accelerated transition and trapped within a regulatory paradox in which outdated and draconian regulations do not promote responsible growth but rather no growth at all.

The overarching result is a profound loss of control. The United States lost control over its economic interests through debilitating deference to international organizations captured by Europe’s green vision of energy — the very Europe that is currently suffering from economic ineptitude and contraction. As Joseph Sternberg stated, this is “a crisis of choice.”

After a year of extreme price volatility in natural gas markets and Russian energy weaponization, the European Union (EU) is finally taking corrective measures, including labeling natural gas as a sustainable energy source under its net-zero rubric, although not without opposition from Germany. Many nations are finally embracing the Eurozone economy’s saving grace — fracking. Even Germany is now developing five LNG import terminals with U.S. supply contracts already in place.

This is likely too little too late for Europe, which still flounders with the development of sound energy policy. The United States similarly refuses to see the light.

The New Commanding Heights (and Lows)

The past eight years demonstrated the contrasting merits of two economic models. One prioritized right-sizing regulation and streamlining permitting, enabling market forces to seek and maintain equilibrium. The other prioritized greater market manipulation, including tilting market scales toward less capable power sources like renewable energy. Today, the struggle between these opposing models places the economy in jeopardy, and as the saying goes, “when elephants fight, mice get trampled.”

For instance, the Biden administration held up LNG export authorization for its entire first year. Only after a March 2022 U.S.-EU Summit did the administration partially acquiesce and approve new export operations. Moreover, a comparison of the first two years of Federal Energy Regulatory Commission (FERC) natural gas pipeline permits under the Trump and Biden administrations shows a stark difference. Under the Trump administration, FERC permitted 44.6 bcf/d compared to only 4.5 bcf/d under their successors. Without pipelines, the world should expect little real relief from the United States.

The Biden administration’s approach is clearly to fundamentally restructure global economics — a vision on full display in the 2022 National Security Strategy, and it’s already producing results.

Fissures are emerging between the developed and developing world on what it means to achieve energy security. There is a resilient coalition of the non-aligned, including U.S. strategic partners in the Indo-Pacific, who prioritize energy affordability and reliability, regardless of product origin, to fuel their growing economies. The simultaneous calls for an accelerated transition and embargoing of Russian energy are proving a bridge too far.

Despite this divide, the United States and European Union continue to exert their diplomatic and economic might to redirect the allocation of global investment capital while ignoring the economic realities of our strategic partners.

The breadth of creative solutions to this energy crisis is astounding, but many proposals fail the most basic consideration — are they tethered to reality? Since 2021, the United States has outlined more than $1.5 trillion on climate-oriented energy programs. Still, by the Biden administration’s assertion, these are long-term measures incapable of addressing present threats.

There are more meaningful solutions worthy of pursuit. First and foremost, Congress must tackle permitting. Reform should not merely be patchworked efforts as previously proposed by both parties, but a revolutionary modernization effort, like overhauling the National Environmental Policy Act to restore the United States to a nation of builders. It is foolish to think that the United States can address twenty-first-century energy markets with a twentieth-century rulebook. Even the notoriously bureaucratic Byzantine empire recognized the need for modernizing reforms.