Why Biden Should Stop Dawdling and Call Ukraine’s Zelensky 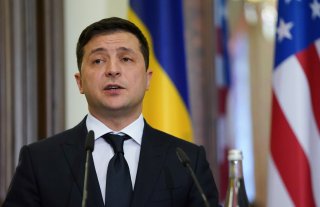 Dragging his heels about calling Israel’s Prime Minister Benjamin Netanyahu, who cozied up to Donald Trump for four years, was one thing. But for Joe Biden to stiff Ukrainian president Volodymyr Zelensky, is another. Recall that Trump dangled an Oval Office visit in exchange for a bogus investigation that was meant to ensure his reelection, but the savvy Ukrainian president refused to play ball. Now Biden has an opportunity to reset the relationship as Kyiv—and score a major win for his democracy agenda.

Biden should offer far more than platitudes. He has three tasks. First, he must convince Zelensky to trust him. Second, he should reassure the Ukrainian president that Washington has his back in the military standoff with Russia. Above all, he should send a warning message about the rollback of reforms in Ukraine itself.

What happens in Kyiv matters far beyond Kyiv. If Ukraine embraces the rule of law, then Putinism’s days are numbered. Russian president Vladimir Putin will no longer be able to credibly claim that democracy and the rule of law are impossible if Ukraine can do it. Success in Ukraine, as Putin well knows, would have a ripple effect in Russia and Belarus and perhaps beyond.

After reassuring Zelensky that he wants to restore the U.S.-Ukrainian relationship, Biden’s task gets easier. He should emphasize to Zelensky that the United States is already bolstering its support for Kyiv’s efforts to repel the Russian-backed forces in eastern Ukraine. The Atlantic Council report Biden and Ukraine: A Strategy for the New Administration notes that the Biden administration can counter Russia’s malign influence.

The goals could not be clearer: Ukraine embraces reform and Russia and its proxies exit once and for all. To achieve this, we urge Congress to increase military assistance to Ukraine to at least $500,000,000 per year and not let up on opposition to Russia’s Nord Stream 2 pipeline, which would cut off important transit revenues to Ukraine. We urge the administration to appoint an ambassador to Ukraine as soon as possible, take leadership of stalemated Donbas diplomacy by naming a special envoy or empowering a top State Department official to negotiate, and grant Ukraine major non-NATO ally status. If Moscow remains intransigent and refuses to leave eastern Ukraine, which is the Kremlin’s likely response, then Biden should consider establishing a permanent U.S. military presence at a Ukrainian training center close to the occupied Donbas and launching a NATO Membership Action Plan for Ukraine.

Then the conversation gets tough. Biden needs to reveal that he knows about Kyiv’s backsliding on reform without insulting or blaming Zelensky. Biden should encourage him to make history and dream big. Elected on a platform to make Ukraine rich, end corruption, and end the war in Ukraine, the Ukrainian president has yet to accomplish any of those goals. In fairness, there are no quick wins, but Biden should remind Zelensky that they are achievable objectives and that the United States and Ukraine’s western partners are committed to helping him get there. This is where Biden can shine, and his ability to inspire and empathize is an asset.

Some first phone calls are easy meet-and-greets. This isn’t one of those. Biden must wade into Ukraine’s complex domestic politics, which will be hard because Zelensky deserves much of the blame for last year’s backsliding.

After getting off to a promising start, 2020 wasn’t a good year for Ukraine. By March 2020, Ukraine lurched in the wrong direction. Zelensky dismissed his pro-reform government, a general prosecutor who was starting to show real progress in reforming Ukraine’s prosecutorial system, and a host of competent and honest technocrats. Then the global pandemic hit. Foreign direct investment all but dried up, dropping from 3–4 percent from 2016-2019 to .2 percent in 2020. The business community consistently says that the courts are the problem. In the fall, the requirement that the country’s public officials disclose their assets, an effort to limit graft in public office, was watered down. The head of the National Anti-Corruption Bureau of Ukraine is expected to be sacked any day.

Fortunately, Biden knows how to play hardball. He’s familiar with Ukraine’s murky domestic politics and, as vice president, he threatened to cut off U.S. assistance if a notorious prosecutor general wasn’t fired within a few hours. The prosecutor was sacked. So now is the moment to engage Kyiv. Biden’s election offers a great opportunity to renew the U.S.-Ukrainian relationship and perhaps change history. Just pick up the darned phone already.

Pushing Ukraine Back to the Soviet Union?