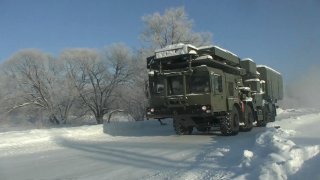 Belarusian president Alexander Lukashenko has announced plans to buy “almost all” of the Russian military equipment currently stationed in Belarus for the Union Resolve 2022 military drills between the two countries.

“As we agreed with you and with the president of Russia, it is very important for us that our military personnel not just see this equipment on a picture, but that they touch it,” Lukashenko said. “They should train alongside their Russian brothers in how to use these systems. This is very important for us, because practically all of the equipment that will be here [in Belarus], we plan to buy from you, in the following year and so forth.”

The Belarusian leader emphasized centers are being set up in Russia and Belarus to train Belarusian troops.

"We are ready to create more centers to practice with both the air defense systems and the newest weapons being developed in Russia today,” he said. “Once again, it is critically important for us to learn about them and understand how to use them.”

Union Resolve 2022 is a series of large-scale joint exercises between Russia and Belarus that will run from February 10-20. The exercise, which will be held across at least five training grounds in Belarus, will reportedly focus “on repelling external aggression, countering terrorism and protecting the interests of the Union State.”

The drills also mark Moscow’s largest deployment to Belarus since the end of the Cold War. As many as 30,000 Russian troops are expected to take part in the event, according to NATO. Neither Moscow nor Minsk have confirmed the number of participating troops.

Russia has sent S-400 missile defense systems, Su-35 air superiority fighters, Pantsir S1 medium-range surface-to-air missile (SAM) systems, and 9K720 Iskander short-range ballistic missile systems to Belarus in anticipation of the exercises. Lukashenko expressed his interest in purchasing S-400 systems in an interview given to Russian state media in December 2021, but the status of any arms sales is unconfirmed.

Lukashenko defended the need for new Russian weapons by what he described as threatening military behavior by NATO and Ukraine.

"The situation is being escalated, they push us to make a response; there have already been several provocations that we could have responded to with force,” he said. “They understand that, if we respond, Russia will get involved, so we tolerate it for now."

Belarus has deepened defense ties with Russia following the fallout from the contested 2020 Belarusian presidential election. Lukashenko announced late last month that Belarus will go to war “if our ally Russia suffers a direct attack, if such aggression is committed against the Russian Federation.”