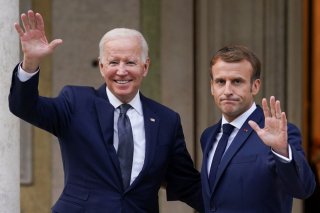 On the sidelines of an upcoming G20 summit in Rome, U.S. president Joe Biden and French president Emmanuel Macron met in person, marking the first time the two leaders had met since the diplomatic crisis following the announcement of the AUKUS nuclear submarine deal between the United States and Australia.

That deal, in which the United States agreed to supply Australia with nuclear submarines, resulted in Canberra canceling a contract for diesel-electric submarines with French defense contractor Naval Group, costing it roughly $60 billion in lost revenue. Incensed at not having been informed of the deal prior to the announcement and the French contract’s cancellation, Paris withdrew its ambassadors from both the United States and Australia, although both ambassadors have since returned.

For his part, Biden admitted during their meeting that the U.S. implementation of the deal had been poorly rolled out, as part of a broader push to mend relations between the two nations and historic partners. While Biden did not apologize for the deal, he agreed that the United States should have consulted the French government before the deal was publicly announced.

“What we did was clumsy,” the president acknowledged, adding that the deal “was not done with a lot of grace.” He claimed that he had believed that the French government had been informed of the submarine deal before its public unveiling.

In his own remarks, Macron struck a conciliatory tone, agreeing that it was essential for the two countries to “look to the future” for further challenges rather than maintaining animosity over previous disagreements. He stopped short of claiming that the relationship between Washington and Paris had been fully restored, saying instead that the two sides had “clarified together what we had to clarify.”

In an early sign of unity, Macron thanked Biden for U.S. involvement in aiding France’s military mission in northern Africa. The French Army has deployed thousands of peacekeeping troops to the arid Sahel to combat a transnational and multi-sided Islamist insurgency against the region’s weak governments. Around five thousand French troops are currently based in Mali and Chad, although Macron has made plans to withdraw them by the end of 2022.

Prior to his meeting with Macron, Biden had met with Pope Francis. Biden, the second Catholic to hold the presidency after John F. Kennedy, spoke privately with the pope for more than an hour.