Could Israel's Missile Defenses Withstand a Swarm or Missile Attack from Iran? 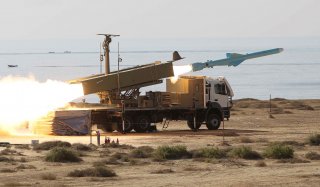 In the aftermath of Iran’s alleged drone strikes against Saudi Arabia and military support for Houthi insurgents in Yemen, Prominent figures in Israel’s security establishment are growing increasingly convinced that a direct military confrontation with Tehran is not only likely, but inevitable. An Iranian attack is “only a matter of time,” Brigadier General Dror Shalom stated point blankly in a recent interview with Israeli media outlet Israel Hayom. Shalom, who is also the head of  Israeli Defense Forces’ (IDF) military intelligence, added that the attack “could be in the form of a surface-to-surface missile, cruise missiles, or long-range UAVs.”

What exactly is the current state of the IDF’s missile defenses, and will they be able to repel the next large-scale missile strike from Iran or one of its regional proxies?

Widely seen as a class-leading missile defense system when it was introduced in 2011, Iron Dome has since come under criticism by several revisionist defense commentators. MIT Professor Ted Postol authored a series of influential if not controversial articles arguing that Iron Dome’s true interception rate -- that is, its ability to strike and destroy a rocket’s warhead rather than its fuselage-- was under 50%. Meanwhile, a more charitable, but still critically-minded, performance estimate by Michael Armstrong puts the Iron Dome’s interception rate at 59% to 75%.

David’s Sling was fired in anger only once since its 2017 introduction, trying and failing to intercept two Syrian Scarab tactical ballistic missiles that the IDF mistakenly believed to have been fired at Israel. Arrow-2 has successfully intercepted one S-200 missile, while Arrow-3 was only declared operational in 2017 and is still undergoing final tests.

These technical shortcomings notwithstanding, Israeli missile defenses currently suffer from inherent operational limitations. As Israel’s adversaries have learned over the past decade, even the most capable anti-missile systems are not immune to swarm techniques. During the Gaza conflict of 2014, the Iron Dome batteries struggled to intercept all of 690 short-range rockets fired nearly simultaneously within several miles of their intended targets(s); Israeli intelligence asserts that future attacks may involve as many as 1,000 rockets fired per day, stretching Iron Dome’s already questionable interception rate even thinner. Another challenge is the cost-efficiency of Iron Dome’s Tamir interceptor missile, especially in the context of saturation attacks-- at around $150,000, it is many times more expensive than the swarms of cheap missiles it is destroying.

Cost concerns and saturation strike vulnerability are weaknesses by no means exclusive to Israeli missile defenses- in fact, they plague every flagship anti-air system from the Russian S-400 to the U.S. Patriot. The inherent limitations of conventional missile defense hardware have led some in the Israeli defense sector to advocate for the revival of a laser air defense project known as the Iron Beam, put on the back burner over a decade ago due to the then-premature state of laser weaponry. There are, to be sure, costs and risks to being an early adopter of an unproven technology-- under the circumstances, the IDF may opt for iterative Iron Dome improvements or even the early concept Arrow-4 as safer investments to ensure the integrity of Israel’s missile defense deterrent into the coming decades.