Did the World Overestimate the Strength of Russia's Military? 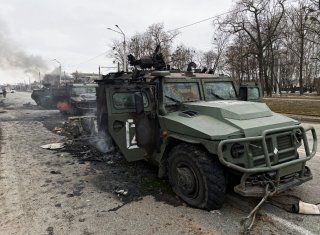 Pentagon assessments and news reports from Ukraine suggest that Russian forces may be experiencing major morale problems, a factor that is likely to undermine their will to fight. Unlike the Ukrainian defenders who are fighting for their homeland, Russian troops are being ordered to risk dying for reasons that are unlikely to be very important to them.

Recognizing the expected impact of this morale deficit on the performance of Russian soldiers, some might raise what seems to be a fair and relevant question: has the world overestimated Russia’s military capabilities?

Russia’s massive convoy headed toward Kyiv remains stalled, and the military is struggling to resolve substantial logistics and sustainment setbacks. Moreover, Russia’s force protection mechanisms are being challenged by Ukrainian ambushes that have decimated Russian combat vehicles at key choke points. While many observers likely underestimated the resolve, combat prowess, and sheer intensity of the Ukrainian military, it also appears that the strength of Russia's military may have been greatly overestimated.

More specifically, when asked why Russia has not been able to use its massive arsenal of aircraft to establish air supremacy, Pentagon spokesman John Kirby said candidly that Moscow’s air-ground coordination has not been particularly effective. Sure enough, Ukraine’s skies are still “contested,” and Kirby emphasized that Ukraine’s air defense systems are proving effective and functional.

When it comes to functional military power, is Russia a paper tiger? Global Firepower reports that Russia operates as many as 12,000 tanks, although many of those tanks are likely Cold War-era tanks without the advanced thermal sights, weapons, and command-and-control systems necessary to destroy modern U.S. and NATO tanks.

Of course, Putin has made a public spectacle of Russia’s supposedly operational hypersonic weapons, and state-owned media outlets consistently tout new military tests and technologies. Russia’s stealthy 5th-generation Su-57 fighter jets are often in the news, and the new T-14 Armata tank has been hyped for many years. Regardless of the relative sophistication or potential superiority of these systems, there is a simple “numbers” equation to consider. According to state-run media outlets, the Russian military operates about twelve Su-57s and a small number of T-14s. Therefore, even assuming that the T-14s are just as capable as Russia claims, they would simply be outnumbered by upgraded NATO tanks in any major engagement. Furthermore, there is no reason to assume that a T-14 would prevail in an engagement against the latest M1A2 SEP v3 variant of the Abrams tank. There are few reasons to assume that Su-57s would rival F-35s in the skies. Beyond the F-35’s specific capabilities, the United States operates hundreds of F-35s, and the list of U.S. allies with F-35 fleets is growing larger by the day.

It is widely known that the Russian Navy is much weaker than the U.S. Navy. In addition, Moscow’s 5th-generation airpower does not compare with NATO’s. Because of these weaknesses, it has long been thought that ground war is Russia’s key strength. However, is the invasion of Ukraine revealing that Russia’s integrated ground combat abilities, long thought to be exemplary, have been massively overestimated?