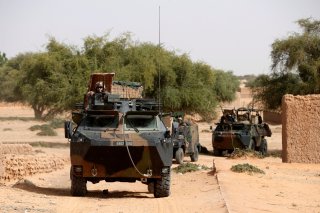 French president Emmanuel Macron announced on Wednesday that Operation Barkhane, the French military’s decade-long operation to combat jihadist rebel movements in West Africa’s arid and sparsely populated Sahel region, had ended. Macron, however, stressed that his government remained committed to eliminating the Islamist threat and that French troops would remain stationed in West Africa for the time being.

Outlining the new policy in a speech in the French city of Toulon, Macron claimed that French “military support for African countries will continue, but according to new principles that we have defined with them.” He emphasized that Paris would “reduce the exposure and visibility of our military forces in Africa [and] focus on cooperation and support [with West African partner states] … mainly in terms of equipment, training, intelligence, and operation partnership when the countries wish it.”

Roughly 3,000 French troops remain present in West Africa, mostly deployed in Niger, Chad, and Burkina Faso. Although France’s anti-jihadist operations were formerly centered in Mali, French troops left the country altogether in the summer of 2022 following a military coup the previous year strongly opposed by Paris. France’s positions in Niger and Chad have also encountered domestic opposition, and its presence in Burkina Faso has been placed into question as that country experienced a coup d’etat in January and again in late September. In October, protesters in Ouagadougou, Burkina Faso’s capital, attempted to break into the French embassy after rumors circulated that it had offered sanctuary to Paul-Henri Sandaogo Damiba, the leader of the first coup and the victim of the second.

As French influence has waned in the Sahel, several of the region’s governments have turned to Russia for security by hiring the services of the controversial Wagner Group private military contractor. Russian forces have remained more apolitical in the region and continued to cooperate with military juntas, most notably in Mali where Russian forces have remained active over the past year as France withdrew. Western observers have also warned of a lack of international oversight regarding the activities of Russian mercenaries, who have already been implicated in at least one likely war crime in Mali.

Jihadist groups including Al Qaeda, the Islamic State (ISIS), and other offshoots of both factions remain active across the Sahel, typically operating without regard to the region’s barely-demarcated borders and posing a significant security challenge for the area’s governments.