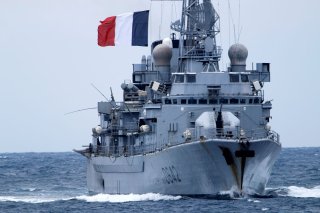 FS Charles De Gaulle, the flagship of the French Navy, arrived in the port of Limassol on the southern coast of Cyprus on Saturday as part of a planned visit to the island nation. The nuclear-powered aircraft carrier and her strike group were scheduled to participate in joint training exercises with the Cyprus National Guard. The drills were part of the Clemenceau 22 mission, which began on February 1 and is scheduled to run through April.

USS Ross, a U.S. Navy Arleigh Burke-class guided-missile destroyer, also made a port-of-call visit to Limassol as part of the mission, while the French Navy’s multi-mission frigate Normandie arrived at the port of Larnaca. In addition, the command and supply ship Marne and Alsace, a multi-mission frigate with enhanced air-defense capabilities, were scheduled to arrive in Cyprus.

It was reported that the mission, which was to include interactions with the Romanian Navy, had been scrubbed due to Russia's invasion of Ukraine last week. The entire carrier strike group has been retasked and will support NATO partners in the region.

France's carrier could not transit to the Black Sea because of Montreux Convention restrictions, but its air wing will likely be tasked with patrolling the skies above the Black Sea and supporting partners in the region, including Romania and Bulgaria.

"We will adapt our tactical posture to take into account the aggressiveness of Russia at the strategic level," a French Navy spokesman told NavalNews.com. "It is obvious to us that what is currently happening in Ukraine will have an impact in the Eastern Mediterranean."

The French Navy added that it was not seeking to escalate tensions, but was instead working to prevent the risks of misunderstanding and misconception. To avoid such issues, the French Navy has even set up a direct line of communication between its Mediterranean Fleet Command—CECMED in Toulon—and the Russian command in Latakia, Syria.

Closing of the Bosphorus and Dardanelles Straits

On Monday, the situation reached a level not seen since the Cold War when Turkey closed off the Bosphorus and Dardanelles straits to warships from any country, whether they border the Black Sea or not. Turkey announced that it would allow warships through if they were returning to a home base in the Black Sea, which includes Russian ships from the Black Sea Fleet.

The authority to restrict warships, which was given to Turkey by the Montreaux Convention of 1936, will likely limit Russia's ability to move ships from its other fleets to the Black Sea.

"When Turkey is not a belligerent in the conflict, it has the authority to restrict the passage of the warring states’ warships across the straits," Turkish minister of foreign affairs Mevlüt Çavuolu told reporters. "If the warship is returning to its base in the Black Sea, the passage is not closed. We adhere to the Montreux rules. All governments, riparian and non-riparian, were warned not to send warships across the straits.”

No country has tried to send warships through the Bosphorus or Dardanelles straits since the warning was issued. However, by declaring it a war, Ankara can use the rules of the Montreux Convention that allow it to restrict the passage of the straits.

Adm. James Stavridis, Supreme Allied Commander of NATO, said the move was "powerful, sensible and bold." It will prevent Russian maritime reinforcements from coming into the Black Sea, while NATO may still have access as it is not engaged in the conflict.

"It is also time for NATO, which will continue to have access of course, to send more of its ships into the Black Sea to support Turkey, Bulgaria, and Romania, the NATO members whose fleets operate routinely there," Adm. Stavridis told USNI News.