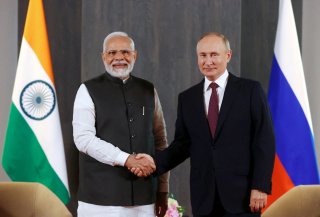 “We discussed in detail the state and prospects of military-technical cooperation, including joint production of modern arms,” Lavrov said, according to Russia’s state-run TASS news agency. He added that Moscow and New Delhi were particularly interested in expanding cooperation in the areas of nuclear energy and space travel, praising India’s recent accomplishments in both areas. The meeting between Lavrov and Jaishankar on Tuesday marked the fifth time the two foreign ministers have met since the beginning of the year.

India, soon to become the world’s most populous country, and Russia, its largest by geography, have long maintained a deep political and commercial partnership. Although India remained officially neutral during the Cold War and was one of the key pillars of the Non-Aligned Movement, it enjoyed good relations with the Soviet Union, while the West backed Pakistan, its neighbor and primary regional rival. Throughout the modern era, New Delhi has imported most of its military equipment from Russia, which has remained a major producer of both light and heavy weaponry. In turn, Russia remains a significant export destination for Indian-made goods, notably including pharmaceutical products.

Jaishankar’s arrival in Moscow earlier in the week marked the first time he had traveled to Russia since the onset of Russia’s invasion of neighboring Ukraine in February. The foreign minister arrived at the head of a delegation including Indian officials and businessmen from various industries, including agriculture, energy, and logistics. During his meeting with Lavrov, he praised Russia, describing it as a “steady and time-tested partner” for India and claiming that the bilateral relationship had “served both our countries very, very well.”

India has officially remained neutral in the ongoing Russian invasion of Ukraine. Although Indian lawmakers have sent humanitarian assistance to Kyiv and verbally rebuked the Kremlin, New Delhi’s representative at the United Nations abstained on a resolution in March condemning the invasion, as well as a second resolution in October condemning Russia’s decision to “annex” four Ukrainian provinces in the country’s south and east. During his meeting with Lavrov, Jaishankar indicated that New Delhi would continue to purchase Russian oil, declining to participate in U.S. and European Union sanctions on the Kremlin and suggesting that doing so was necessary for Indian families who could not afford more expensive alternatives.