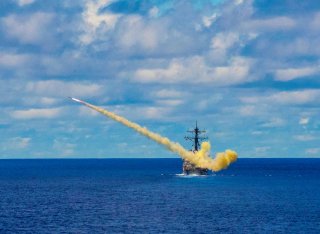 Last week the Taiwanese Ministry of National Defense announced that it is seeking to purchase Harpoon coastal batteries from the United States. Deputy Defense Minister Chang Che-ping confirmed the military’s intentions to lawmakers at a committee meeting, which was reported by the local media in Taiwan.

The island nation, which the government in Beijing sees as a breakaway province, has already developed its own anti-ship missile, the Hsiung Feng II (HF-2), which was developed in the 1990s. As far back as 20 years ago there were plans to replace the HF-2 with the American made RGM-84 Harpoon. It serves in dozens of countries on a number of platforms.

Taiwan has also developed its Hsiung Feng III, a supersonic missile that uses solid-fuel propellant as a booster and liquid fuel to power a ramjet. It was originally conceived as an anti-ship missile, but its range is limited to just 75 to 90 miles. With that in mind, Taipei has taken another look at the American Harpoon—and it isn’t the only power in Asia that sees the potential of the aging U.S. missile platform.

In April, the United States Department of Defense (DoD) Defense Security Cooperation Agency (DSCA) announced that the State Department had approved the foreign military sales of the AGM-84L Harpoon to India.

Taipei will still have to make a formal request to Washington, but given that the weapon was sold to India, it is largely suggested that such a sale could be quickly approved. The Taiwan military seeks to acquire the missiles by 2023.

According to a report from The Drive, Chang wasn’t clear exactly which type of Harpoons that Taiwan was seeking, but it would likely be the Block II variants. The Taiwan Air Force already has air-launched Block II AGM-84L Harpoons in its arsenal, while the island nation’s Navy has submarine-launched UGM-84Ls. Two former U.S. Navy Kidd and Knox-class ships serving with Taiwan also are armed with the older surface-launched RGM-84 variants.

Tensions have increased in the region in recent months.

In April, the Chinese People’s Liberation Army Navy (PLAN) aircraft carrier Liaoning, sailed past Taiwan in a show of Chinese naval strength in the region while the American aircraft carrier USS Theodore Roosevelt (CVN-71) was sidelined in port in Guam due to an outbreak of the novel coronavirus among its crew.

Also in April, to mark the 70th anniversary of the PLAN, Beijing announced that it had created a new unit of marines, even as China had approved the reduction of its army by 300,000 soldiers. That signaled a shift in military strength from the People’s Liberation Army (PLA) to the PLAN Marine Corps—and according to reports, the latter force could grow by 400% from 20,000 marines to more than 100,000.

Given that Beijing is ramping up an amphibious force, has a second carrier that is undergoing sea trials and continues to expand its presence in the region it is no wonder that Taipei seeks to ensure that it has the right counter-measures in place.