U.S. Envoy Pushes for Women’s Rights in Meeting with Taliban 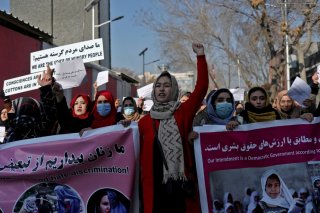 U.S. special envoy for Afghanistan Thomas West indicated on Saturday that he had met with the Taliban’s foreign minister, Amir Khan Muttaqi, in Doha and had urged the new government to roll back its steadily expanding restrictions on women’s activity in public life.

“Girls must be back in school,” West wrote on Twitter after the meeting. “Women [must be] free to move [and] work [without] restrictions for progress to normalized relations.”

Following its conquest of Afghanistan in August 2021, the Taliban has sought international recognition for its government—recognition that has not come from any nation, including neighboring Pakistan, whose government is suspected to be aligned with the group. At the same time, the Taliban has issued a series of increasingly draconian restrictions on women’s activities in public—firing many from public-sector jobs, mandating that women traveling far from home do so with a male relative, and most recently, requiring head and sometimes face veils for women in public. Although the group has repeatedly promised to reopen girls’ schools, they have remained closed since the initial conquest. In late March, a brief attempt to reopen the girls’ schools ended with their re-closure within hours after Taliban officials argued that Afghan girls’ school uniforms were immodest. Since then, the group has found a variety of justifications for the schools’ continued closure, although it has insisted that it intends to reopen them in the future.

The United States and other Western countries have explicitly tied international recognition—and therefore the expansion of humanitarian aid and potentially development assistance in the future—to women’s rights. During its first period of rule over Afghanistan from 1996 until 2001, the Taliban essentially banned women’s participation in public life, forbidding them from working, going to school, or leaving their homes without a male relative present. Only three nations recognized the Taliban’s first government—Pakistan, Saudi Arabia, and the United Arab Emirates—before its collapse after the 9/11 attacks and the subsequent U.S. invasion.

In addition to their conversation on women’s rights, West reported that he and Muttaqi had discussed economic reform efforts for Afghanistan, including efforts to rebuild the country’s shattered economy. Although many international sanctions on Afghanistan were waived in December 2021 by an executive order from President Joe Biden, the country continues to face shortages of food, electricity, and essential medicines.