The U.S. and Taliban Meet in Qatar for First Postwar Talks 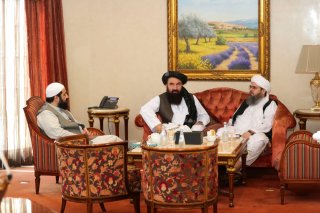 State Department spokesman Ned Price announced on Sunday that U.S. and Taliban officials had met face-to-face in Doha for the first time since the militant group took full control of Afghanistan on August 15.

Price outlined the topic of the meeting, stating that it covered regional security and concerns that the country could be used as a base for terror groups, as it was prior to the 9/11 attacks. The Taliban has publicly committed to ending terrorism in Afghanistan and refusing to allow foreign terror groups to launch attacks from its soil, and it has fought a low-level war against the Islamic State’s “Khorasan Province” (ISIS-K) branch, responsible for a number of high-profile terror attacks in the country in recent months.

Another topic of significant concern raised at the meeting was the right of Afghans and foreign nationals to safely evacuate the country, which the Taliban has largely allowed for foreigners but tried to prevent for Afghans without foreign citizenship, in order to stem human capital flight. Other topics covered included human and women’s rights and humanitarian assistance to the country.

Price’s statement described the meeting as “candid and professional,” claiming that the U.S. delegation had reiterated that they would judge the Taliban’s new government on its actions, rather than its words.

The Taliban’s foreign ministry announced on Sunday that the meeting had been successful and had focused primarily on discussions of humanitarian aid. The Taliban welcomed foreign aid, although it suggested in its statement that it should not be linked to political requests. It also requested that Washington release its freezing of Afghanistan’s assets, allowing it to access roughly $10 billion in funds intended for the previous Afghan government. Neither side confirmed that any agreement had been reached at the meeting.

The two-day conference was held in Doha, Qatar, on neutral ground. Qatar has maintained friendly ties with both the Taliban and the United States. The Taliban has operated a political office in the country since 2012, and prior negotiations were held there that resulted in the February 2020 withdrawal agreement.

Amir Khan Muttaqi, the Taliban’s interim Foreign Minister, was quoted by Qatar-based Al Jazeera as saying that the Taliban was interested in “opening a new page” in its relationship with the United States.