Is the U.S. Naval Buildup in the Pacific a Warning to China? 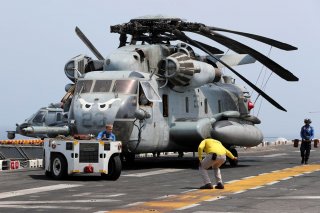 Even as China’s first domestically built aircraft carrier Shangong began its sea trials this month, and conducted air sorties near Taiwan, Beijing was put on notice that the United States remains the only nation in the world that could deploy a three Carrier Strike Groups (CSGs) to the Pacific simultaneously.

Last week the USS Nimitz (CVN-68) Carrier Strike Group, CSG-11, which is part of the U.S. Navy’s 3rd Fleet and coordinates with the U.S. 7th Fleet to conduct missions, began its deployment. U.S. Navy officials have declined to say where the 45-year-old nuclear-powered carrier and its warships were headed but it was just one of three CSGs now operating in the region.

Just as CSG-11 was steaming westward from San Diego, USS Ronald Reagan (CVN-76) left its homeport in Yokosuka, Japan to begin a CSG patrol in the region. The carrier embarked with Carrier Air Wing 5 based at Marine Corps Air Station Iwakuni and was joined by unspecified escorts from Destroyer Squadron 15 according to USNI News.

CVN-76 had completed its annual repair in April and held sea trials in May before beginning its most recent patrol deployment. The warships’ 5,000 sailors and airmen had undergone a 15-day restriction of movement (ROM) period and were tested for COVID-19 before embarking as an effort to create a “protective bubble” to keep the ship free from the highly infectious virus.

USS Nimitz had undertaken similar precautions. This followed the outbreak of the novel coronavirus on USS Theodore Roosevelt (CVN-71), which had been sidelined since late March after nearly a third of its crew were impacted from the disease. That had allowed China’s People’s Liberation Army Navy (PLAN) to have the unique distinction of having the only operational carrier in the region. However, USS Theodore Roosevelt has now returned to duty after is crew recovered from the COVID-19 outbreak.

The deployment of three carriers comes as U.S. national defense strategy sees China as a top security concern. As The Associated Press, via the Navy Times reported, the Pentagon has been working to shift more resources and military assets to the Pacific and South East Asia to address Beijing’s growing economic influence and military might in the region.

In addition, the U.S. Navy operates eight amphibious assault ships (LHA), which is as large in size as many of the actual carriers operated by foreign navies, including China, and has plans to build a 4th America­-class LHA. The versatile warships can transport up to 3,000 sailors and marines and house as many as 31 aircraft including the Marine Corps’ F-35B, which can make vertical takes and landings and thus doesn’t require a catapult.

In April, USS America (LHA-6) took part in a drill in the South China Sea as a show of force while the USS Theodore Roosevelt was in Guam.

It isn’t just the U.S. Navy that is serving notice to the Beijing either, as the U.S. Air Force has been flying B-1B bombers and Global Hawk drones in the Sea China Sea in recent weeks. Despite COVID-19 and distractions including protests across the United States, the U.S. military’s flexing of its muscles should serve as a reminder to Beijing—as well as Moscow and Tehran—not to underestimate America’s resolve.