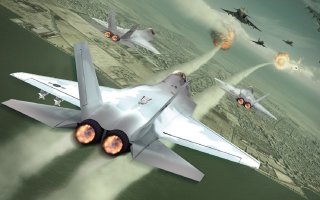 A KF-X mockup shown at an expo in 2019 revealed a design resembling a twin-engine variant of the Lockheed F-35 Lightning stealth jet, already in service with the Korean Air Force. If everything goes according to schedule—a rare occurrence in the development of advanced warplanes—Korea Aerospace Industries (KAI) plans to complete a KF-X prototype by April 2021, make its first flight the following year, and begin production by 2026.

But though KF-X is frequently billed as a fifth-generation stealth fighter, its own designers have always stated the jet was intended to be a 4.5-generation fighter, placing it in the company of the Dassault Rafale, the Eurofighter Typhoon, the Swedish Gripen-E and the Boeing Super Hornet Block III.

Indeed, the original concept was less for a Korean F-22 Raptor, but rather a super F-16 fighter with limited stealth capabilities.

Like any cutting-edge jet fighter program, KF-X would inevitably prove hugely expensive—the official estimate is pegged at the equivalent of $7.8 billion, which some think is optimistic. Thus, many observers were skeptical of the KF-X program, and indeed for years, it was dogged by delays and political drama.

Further complicating matters, Seoul secured a 20% buy-in from Indonesia, which is supposed to procure fifty of its own IF-X fighters from the program. But Jakarta has since only fronted the equivalent of $190 million of its expected $1.3 billion share, and is trying to renegotiate for repayment in-kind with transport planes.

Still, as we enter the 2020s it seems the KF-X is growing closer and closer to becoming a real, flying aircraft. The 12-ton design will be propelled by two General Electric F414 turbofans (a type used by the Super Hornet and Gripen), manufactured locally in collaboration with Hanwha. The KF-X is projected to have a maximum speed of Mach 1.8 and a range of 1,800 miles. That’s a lot further than the F-16, though not a faster maximum speed as has been claimed, though it's possible the KF-X may be designed to cruise at much higher speeds without using afterburners.

As the United States denied licenses for these technologies, South Korea has had to have Korean firms develop these components domestically, often with assistance from technology transfers provided by Israeli and European companies. It also managed to source a terrain-following system designed to enable ground-hugging low-altitude flying from Israeli firm Elbit.

Reportedly KAI would like to integrate American AIM-9 and AIM-120 air-to-air missiles already in use by the Korean air force but hasn’t received the necessary licenses to integrate them.

The KF-X will also be designed to carry a domestic Korean variant of the German KEPD-350K Taurus cruise missile Taurus missiles launched by Korean F-15K Slam Eagles play a key role in South Korea’s Kill Chain strategy to knock out North Korea’s command-and-control and weapons-of-mass-destruction capabilities in event of a war.

Greg Waldron of Flight Global notes in an article that the KF-X mockup revealed several characteristics indicative of relatively modest stealth-related ambitions: “Although the aircraft resembles Lockheed's F-35A, it lacks several of the US type’s stealth qualities. The port for its 20mm cannon is exposed, for example, and the infrared search and track (IRST) sensor protrudes in front of the cockpit canopy, similar to on the Typhoon.”

While 4.5-generation aircraft usually incorporate radar-absorbent materials and non-reflective shaping to reduce the range at which they become visible on radar, they remain orders of magnitude more visible than true fifth-generation stealth aircraft like the F-22 Raptor or F-35 Lightning.

The KF-X is claimed to have a target radar cross-section of .5 meters squared, in the same ballpark as a Eurofighter Typhoon or Swedish Gripen. The Rafale and F-16C clock in at 1 of meter squared. By contrast, an F-35’s cross-section is claimed to be around one-thousandth that at .001 m2, and the F-22 ten times smaller than.

The initial planned KF-X Block 1 model will also rely upon externally mounted weapons, which inflate an aircraft’s radar signature. A planned Block 2 model will introduce internal weapons bays and air-to-ground capability. Notionally, Block 3 would then seek further radar-cross-section reductions to approach the stealth capabilities of a B-2 bomber or F-35, according to Defense Industry Daily.

Achieving higher thresholds of radar stealth require increasingly expensive design solutions and industrial technologies—so much more expensive than Russia apparently judged pursuing them not worth the prohibitive cost when developing its own Su-57 low-observable fighter. But without those added margins, a 4.5-generation fighter’s movements remain considerably more restricted when attempting to penetrate airspace guarded by integrated air defense systems.

Nonetheless, the KF-X seems increasingly of a piece with other ambitious domestic military projects by South Korea including the deployment of cruise missile submarines and jump-jet laden aircraft carriers. The export success of South Korea’s FA-50 Golden Eagle light fighter, domestically built with some input from Lockheed, also undoubtedly served as a vital stepping stone for the more ambitious KF-X program.

If South Korea succeeds in bringing the KF-X into service as seems increasingly likely, it will be an impressive achievement given how few countries can muster the technologies and hefty, sustained financial outlays to develop high-performance combat aircraft.

Korea’s development of KF-X will cost more than procuring jets of similar capability abroad, but will come with other benefits: lessening dependence on the United States (vital given chilling Washington-Seoul relations), keeping the profits flowing to domestic business champions, opening foreign export opportunities, and developing a technological base which could develop further high-performance combat aircraft in the future.

The resulting aircraft looks like it will be in the ballpark of a Super Hornet or Eurofighter: an impressive aerial combat machine that will remain more elusive on radar than predecessors like the Phantom or F-15 Eagle—but not something which should be properly described as a fifth-generation stealth fighter.