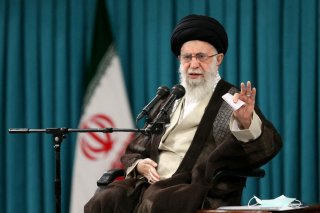 An Iranian court sentenced a protester arrested during the country’s ongoing nationwide protest movement to death on Sunday—marking the first death sentence the country’s judicial system has handed down in response to the protests as they enter their third month.

The sentence, issued by a court in Tehran, came after the protester in question was convicted of “setting fire to a government building, disturbing public order, assembly and conspiracy to commit a crime against national security,” according to Iran’s official Mizan Online legal news network. The outlet accused the protester of acting as “an enemy of God and [an agent of] corruption on Earth,” both punishable offenses under the country’s theocratic legal code. In the same article, it indicated that five other protesters had been sentenced by a different court to prison terms ranging in length from five to ten years, noting that they had been convicted of “gathering and conspiring to commit crimes against nationality and disturbing public order.”

Iran’s ongoing protest movement—sparked by the death in police custody of twenty-two-year-old Mahsa Amini, a Kurdish woman from the northwestern city of Saqqez—has continued for nearly two months. Women, students, and young Iranians have remained at the forefront of the protests. The context of Amini’s arrest for failing to properly wear a headscarf has prompted many women to burn their headscarves and dance in public, both illegal under clerical law.

Although Iran has experienced repeated waves of mass protests in recent years, most recently in late 2019 and early 2020, previous waves of demonstrations were largely framed as reactions to economic discontent, such as the Iranian government’s decision to raise fuel prices in late 2019 or a lack of access to electricity and water during the Covid-19 pandemic. However, the ongoing protests are explicitly anti-clerical in character and have been framed by both demonstrators and Iranian authorities as an attempt to overthrow the Islamic Republic. Consequently, Tehran has vowed to crush the protests and deployed tens of thousands of policemen and Basij militiamen throughout the country to disperse demonstrations by force. It has also instituted restrictions on internet activity throughout Iran to prevent protesters from communicating with each other or sharing information with the outside world.

So far, at least 2,000 people have been charged in connection with the protests. At least 15,000 are thought to have been arrested in total while more than 300 have been killed during clashes with Iranian security forces.