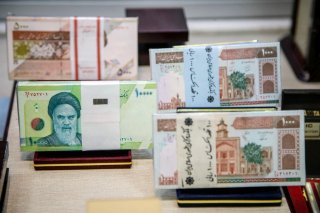 As negotiations between Iran and the P5+1 nations in Vienna have stalled and the country appears to be only days away from constructing its first nuclear weapon, the Iranian riyal has fallen to its lowest level in history, trading at roughly 330,000 per U.S. dollar—a 3,000 percent decrease from its value in 2010 before the imposition of widespread economic sanctions.

The currency’s previous low mark occurred in October 2020 following the imposition of additional U.S. sanctions against Tehran near the end of President Donald Trump’s term in office, including the total disconnection of Iran’s banks from the rest of the world. Following the accession of President Joe Biden to office and the opening of negotiations in Vienna, the currency began to trend upward, only to fall once again as negotiations ground to a halt. In response to the most recent decreases, the Iranian government has reportedly restricted speculation on the currency’s future value and attempted to purchase riyals on the market in an attempt to drive up its price, according to Iran’s pro-government Tasnim News Agency.

The riyal’s newest drop appears connected to Iran’s decision to disconnect the cameras of the International Atomic Energy Agency, or IAEA, at several of its nuclear sites. The disconnection was itself a consequence of the IAEA’s board passing a resolution condemning Iran’s nuclear program, a move that Tehran opposed and had threatened retaliation against. As part of its response, Iran also began to install additional batteries of high-efficiency centrifuges at several sensitive sites.

The global reaction to Iran’s decision has been overwhelmingly negative, with IAEA director general Rafael Grossi warning that the twin developments could signal a “fatal blow” to nuclear diplomacy with Iran if the two steps were not reversed immediately. However, Iranian officials have indicated that the country will stay its course; President Ebrahim Raisi vowed earlier in the week that Tehran would not back down because of foreign pressure.

The negotiations in Vienna are intended to restore the Joint Comprehensive Plan of Action (JCPOA), the landmark nuclear agreement negotiated between Iran and the five permanent members of the United Nations Security Council and Germany—the P5+1—in 2015. Although the agreement is credited with successfully suspending Iran’s nuclear program, the Trump administration withdrew from the deal in 2018 and re-imposed sanctions under its “maximum pressure” campaign.

Although Biden vowed to return to the JCPOA once he took office and participated in the Vienna negotiations, diplomacy between the two sides has stalled since March over lingering disagreements. Tehran has demanded that the United States remove Iran’s Islamic Revolutionary Guard Corps, the branch of its military tasked with protecting the clerical government, from its list of terrorist organizations, but Biden has refused to do so.