The U.S. Can’t Help Afghans Without Engaging the Taliban 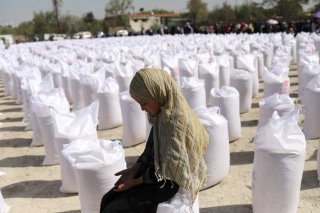 One year after the fall of Kabul and the subsequent Taliban takeover of Afghanistan, the impoverished country faces increasingly desperate conditions. After two decades of leading an insurgency against the United States, the Taliban now face the challenge of running a functioning government.

The economy is in shambles. Nearly 90 percent of the population is experiencing food insecurity, with the World Food Programme (WFP) declaring that almost half the population is suffering from level-3 “crisis” or level-4 “emergency” insecurity. Some families have resorted to marrying off their teenage daughters to collect a “bride-price” to eat.

The Taliban is subject to heavy sanctions from the United States and United Nations Security Council (UNSC), which leave businesses and aid organizations reluctant to engage with Afghanistan despite the U.S. Treasury offering guidance to alleviate legal confusion. The difficulty of supplying assistance to a country without dealing with the government, de facto or legitimate, is real. Additionally, the United States froze $7 billion in assets belonging to the Afghan Central Bank, fearing how the Taliban would use that money.

According to a PBS Frontline article, a Field Coordinator for Doctors Without Borders said the lack of liquidity significantly increases the difficulties of running a hospital, from feeding patients to paying staff and keeping the lights on. The country director for the International Rescue Committee said it took a month to figure out how to pay employees after the United States froze the Afghan reserves. These issues are fatal blows to an economy that, prior to the collapse of the previous Afghan government, relied on foreign aid for 43 percent of gross domestic product (GDP) and 75 percent of its public spending.

The humanitarian crisis has led UN experts to call upon the United States to reassess its decision to block Da Afghanistan Bank’s frozen assets, citing that under international human rights law, all states have an obligation to guarantee that activities under their jurisdiction do not result in human rights violations.

Physical security presents another issue. Recent explosions in the Pul-e-Sokhta and Sar-e-Karez areas of western Kabul, which contains Shia Muslim neighborhoods, by the Sunni Islamic State-Khorasan (ISIS-K) are the latest reality checks for the Taliban, which is now tasked with providing security to all Afghans. Residents have credited the Taliban for their efforts and expressed hope in the group’s change since the 1996-2001 period. Overall, Afghans say they feel safer but less hopeful under Taliban control. However, attacks on the Shia minority have increased, which could cause issues with neighboring Iran, the world’s largest Shia nation.

Finally, the Taliban’s ruthless crackdown on women is inexcusable. Some women can attend school while others are barred. Some women can work while others cannot. Mobility is limited and men are expected to enforce the stringent rules or face repercussions. Those who resist and demand their rights are beaten, tortured, and disappeared for protesting. The Taliban stands accused of executing revenge killings on former Afghan security forces. Before the Taliban takeover, over 6,300 Afghan security personnel serving in the army, police, and air force were women.

The United States faces a conundrum. Does the Biden administration work with the Taliban or oppose them? The answer isn’t simple. Afghanistan needs help but empowering the Taliban also has its drawbacks. After receiving enormous criticism for the optical disaster regarding the Afghanistan withdrawal, the Biden administration faces the tougher task of formulating an Afghan-Taliban policy.

Besides the hard lessons learned from ignoring and ostracizing the Taliban government in Afghanistan, the Biden administration only has to look to neighboring Iran. First, imposing crushing sanctions hurts civilians more than political elites and doesn’t result in regime change. Second, suffering doesn’t motivate people to push for political changes because they are too occupied trying to meet their basic needs. Finally, failing to have a functional diplomatic relationship stresses the ability to cooperate even on shared interests. Despite their twenty-year adversarial relationship, the United States and the Taliban now share some interests.

The Biden administration must prioritize U.S. national security and the welfare of Afghans in the face of public reactions to emotion-inducing news out of Afghanistan and limited political capital. U.S. national security interests in Afghanistan are that the country does not become a safe haven for terrorist groups plotting against the United States again. Afghan welfare interests require not imposing undue hardships on their lives. The two are not mutually exclusive. In fact, both issues face the same obstacle. The United States cannot affect change from the outside looking in. The best approach requires three actions. First, release the frozen Afghanistan central bank assets and don’t confiscate any money for 9/11 families. The Afghan people don’t owe them that debt, and despite the Taliban now governing the country, it isn’t the Taliban’s money. Second, lift all sanctions on the Taliban and reassess their application. Finally, officially recognize the Taliban as the Afghan government and move forward.

Opposition to official recognition already exists in Congress; a Congressional Research Service report observed that members have introduced at least three bills to limit interactions with the Taliban. These bills are retaliatory measures that do not serve American interests or the Afghan people. One bill goes as far as to recognize a government in exile as the legitimate authority of Afghanistan. However, recognition power lies in the president’s hands exclusively.

Congressional opposition primarily focuses on the stipulation that recognition cannot come until the Taliban observes human rights for women. The UN’s language is pertinent in this matter. As stated earlier, all states have an obligation under UN General Assembly Resolution 53/144 to guarantee that activity under their jurisdiction does not result in human rights violations. While neither the UN nor the International Court of Justice defines the term “state,” accepted practice has four elements: (a) a permanent population; (b) a defined territory; (c) government; and (d) capacity to enter into relations with other states. By refusing to recognize the Taliban as the legitimate government of Afghanistan, the international human rights regime has limited application since Afghanistan fails to qualify as a state. Without being a state, the Taliban’s mandate to uphold international law is difficult to enforce. While subjecting the Taliban to international law won’t immediately change human rights conditions in Afghanistan, recognition is a step in the right direction that also provides a way for the international community to hold the Taliban accountable for violations.

Recognition also provides a platform to maintain dialogue. In the quest to change conditions, maintaining dialogue is more important than any UN obligation.

When NPR asked Afghanistan’s interim defense minister, Mullah Mohammad Yaqoob Mujahid, if he desired better relations with the United States, he responded with, “This is obvious.” He noted that recognition is in the United States’ best interest because it has no other regime to deal with. Additionally, he stated, “There are more countries in the world that pose more danger than Afghanistan to America, but still America recognized them officially. I think that recognition is a positive step toward a bigger change.” He is correct that the United States has no one to deal with in Afghanistan but the Taliban; only by building a relationship with the Taliban can the United States look for ways to incentivize behavior changes.

Leaving Afghanistan was the correct decision. Now the Biden administration must release all $7 billion in frozen assets, lift all sanctions on the Taliban so they can be reassessed based on their position as a government, and recognize them officially before getting back to work solving the humanitarian crisis.