Military Parades: How China Showcases Its Power in Asia 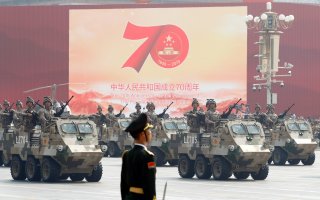 Key Point: There is little room for doubt that China’s armed forces have made immense strides since the 1980s.

The People’s Liberation Army (PLA) marked its ninety-third anniversary with scores of infantry columns, and a wide-ranging display of modernized military hardware that conveys the rapidly changing face of China’s armed forces.

Held on August 1, Army Day is an annual celebration commemorating the 1927 establishment of the PLA following the Nanchang Uprising, the first major battle in the decades-long struggle between the Chinese Communist Party (CCP) and Chiang Kai-Shek’s ruling Nationalist government.

The celebration’s main component takes place in Beijing, but there were a handful of parades across China’s periphery in the days preceding August —notably, CCP General Secretary Xi Jinping presided over a massive July 30 parade involving 12,000 troops and 600 pieces of military hardware in the northeastern Inner Mongolia Autonomous Region. Foreign, and especially western, media were not allowed to cover the event, which was broadcast on Chinese state television and radio. Nevertheless, Russian state media maintains well-established Chinese affiliates who were able to shed further light on the celebration. During a visit to China’s Air Force Academy, Xi told cadets that “it is impossible to have a strong nation without a strong army. We must also possess an overwhelming spirit to be able to challenge any powerful enemy.” The CCP was especially keen on devoting a large chunk of this year’s festivities to honoring the PLA’s Medical Corps, whose efforts in constructing field hospitals and enforcing lockdown measures spearheaded Beijing’s early 2020’s strategy to curb the spread of the coronavirus in China.

The PLA has garnered a reputation for impeccable parade columns, and this Army Day 2020 proves no different; strikingly-uniformed infantry formations marched in perfect lockstep during the flag raising ceremony on Tiananmen Square. Painstakingly choreographed events like these are preceded by grueling practice sessions, including the PLA’s well-documented practice of embedding sharp pins in parade participants’ collars to ensure that perfect head posture is maintained at all times.

In keeping with the rapidly evolving Chinese defense priorities of the past decade, the CCP used the parade and events leading up to it to tout the PLA’s considerable modernization progress. The parade boasted a sizable air column, notably including the People Liberation Army Air Force’s (PLAAF) fifth-generation J-20 stealth fighter and—in what is reportedly its first parade outing—the latest iteration of the J-16 air superiority fighter. Also making an appearance was the Type 001 Liaoning, the first of six total aircraft carriers slated for delivery to the PLA Navy by 2035. The DF-31AG— one of China’s latest and most potent intercontinental ballistic missiles— made a repeat appearance from the 2017 Army Day parade. The DF-31AG builds on the 12,000 km range of its predecessor, adding a wider range of deployment options and improved survivability.

Xi also visited a drone laboratory at the Air Force Aviation University in the northeastern province of Jilin in the weeks preceding Army Day, highlighting China’s ongoing multibillion-dollar investment into developing and producing over 40,000 unmanned land and sea-based systems by 2023.

Even as the PLA continues to grapple with economic growing pains and a deeply entrenched graft culture, there is little room for doubt that China’s armed forces have made immense strides since the 1980’s in modernizing large swathes of their military-industrial base. The CCP’s growing military confidence overlaps with Beijing’s increasingly assertive policy approach vis-a-vis its Pacific neighbors and Washington in recent years.