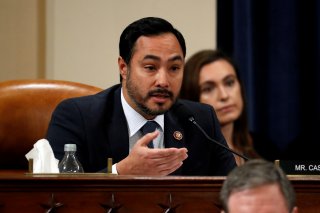 Rep. Joaquin Castro (D–Texas) has officially announced his candidacy to lead the House Foreign Affairs Committee, setting up for a three-way battle over one of the most important lawmaking bodies in Washington.

Castro is a longshot in the committee leadership race, where Rep. Gregory Meeks (D–N.Y.) and Rep. Brad Sherman (D–Calif.) are likely to lead. But his candidacy is likely to give the progressive wing of the Democratic Party a platform on foreign policy and national security in a year when progressives have been pushing the party left on other issues as well.

“In this moment of pandemic and protest, we are confronting hard truths about how unequal our nation remains. Our foreign policy is due for a similar reckoning,” astro wrote in a Tuesday essay on Medium.com announcing his candidacy. “Now it is with hope of empowering new voices, as well as optimism in America’s capacity to do good in the world, that I seek the Chairmanship of the House Foreign Affairs Committee.”

Meeks and Castro have both announced that they want the House Foreign Affairs Committee leadership, and Sherman has reportedly been preparing to run but has not yet announced. Castro is the only candidate who has also served on the House Intelligence and House Armed Services committees.

Bowman was a progressive insurgent who harshly criticized Engel’s positions on the Middle East, and progressives now see an opening to set the agenda on Democratic foreign policy.

Committee leadership traditionally goes to the most senior member of the committee—Castro is eleventh in line—but others can skip the line if they have enough support from the Congressional Democratic Caucus. Engel had achieved his current position by challenging Sherman in 2012.

Castro also called for Congress to take back its war powers from the President, an issue that progressive and moderate Democrats have taken up along with some Republicans.

His biggest disagreement with moderate Democrats may be over economic sanctions. Democratic leadership strongly favors current U.S. sanctions campaigns, and even some progressives see sanctions as an alternative to war.

Castro, however, claimed that “coercive tools like sanctions” have “dominated” U.S. foreign policy for too long, arguing that “the primary victims abroad are civilians whom we should be seeking to empower, not impoverish.”

“We need a new generation of foreign policy leadership with a new vision that promotes inclusive prosperity and democracy at home and a more holistic view of security abroad,” he wrote. “I believe we must put diplomacy at the center of our strategy and rebuild America’s infrastructure of diplomacy to achieve a more open, peaceful and just world.”

This article initially stated that Castro was the first to announce his candidacy for House Foreign Affairs Committee. In fact, Meeks had already announced the Friday before. The article has been updated to reflect the correct chain of events.