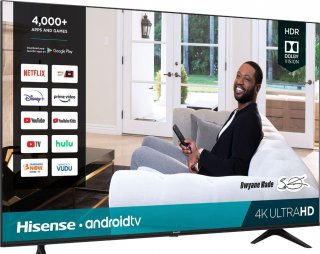 For the past several years, Hisense, along with another Chinese tech giant TCL, has been the go-to TV brand for budget-conscious consumers.

You’ll rarely overpay for Hisense’s solid offerings, but you’ll always land a decent TV that the whole family can enjoy.

The set provides deep, uniform blacks, but it does perform better in dark or dimly lit rooms. If you’re more into daytime TV viewing or if the room is naturally brighter, be aware that the H65 Series may have a tougher time getting rid of those annoying glares and reflections.

In most cases, gameplay should be top-notch—just not on the level of the much-vaunted QLED or OLED panels. If you happen to be waiting patiently for the next-gen gaming consoles from PlayStation or Xbox, know that the H65 Series will do a valiant job to get the job done.

This set boasts Android TV which, similar to Roku and Amazon Fire TV, will give you a VIP experience when searching for streaming apps and on-demand content. The interface is incredibly user-friendly and fluid, and the choices offered are seemingly endless. In one advantage over Roku, users can get HBO Max on the platform.

The remote is quite handy as well, giving you the ability to open or search for popular apps, TV shows and movies or control the volume and inputs via the power of your voice. Google Assistant is built in, so you can also set up smart-home features.

Despite not being overly expensive, the overall design of the H65 Series should be applauded. The set is definitely not as thin as OLEDs or comparable Samsung models, but it does exude a slick and refined look.

This 75-incher’s legs, however, are set quite far apart, so if you’re using a TV stand or a table, make sure that it is long enough.