A Big Change Could Be Coming Soon to Apple Computers 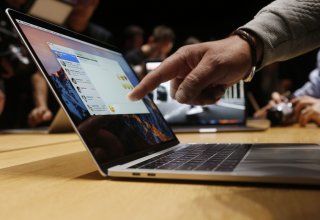 Apple is reportedly seeking to power its Mac computers with its own processors instead of Intel chips.

The announcement is slated to come during Apple’s annual developer conference, WWDC 2020, which begins June 22, according to Bloomberg.

Apple eventually cutting ties with Intel has been expected for years, and this seismic shift will enable the tech giant to build its computers without waiting for Intel to develop a new processor.

It will also likely help Apple stand out from its chief competitors in the cutthroat laptop market, such as Samsung, HP, Dell, Microsoft and others that rely on Intel chips. And if Apple can build a more powerful processor, new customers could enter its ecosystem.

Apple owns about 10% of the overall PC market.

This will be the first time in the 36-year history of the Mac that Apple-designed processors will power these computers. Way back in 2005, Apple announced that it would switch to Intel chips for its Macs beginning in 2006. Before that, PowerPC chips were used to power its Macs.

The new processors will be based on the identical technology used in Apple-designed iPhone and iPad chips. Future Macs, though, will still run the macOS operating system rather than the mobile-focused iOS software.

The technology will be licensed from Arm Ltd., which is a part of Japanese tech conglomerate SoftBank Group Corp. Since the architecture differs from the technology in Intel chips, developers will likely need time to fine-tune their software for the new components.

Tests of the new Macs with Arm-based chips have exhibited vast improvements compared to past Intel versions—mostly in graphics performance and apps tapping into artificial intelligence. They have also shown to be more power-efficient, which would help in building even thinner and lighter laptops.

This year’s WWDC, which will be held online due to the global COVID-19 pandemic, is also expected to reveal updates to its other operating systems—iOS, iPadOS, tvOS and watchOS.

Many are hoping that Apple will place a priority on improving its mobile software, as last year’s much-anticipated release, iOS 13, suffered from several pesky issues.