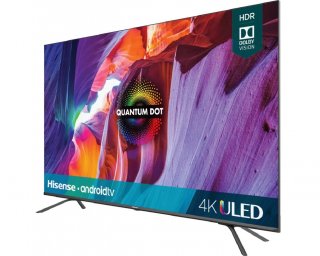 For the past several years, Hisense has been the go-to TV brand for budget-conscious consumers. You’ll rarely overpay for the Chinese tech company’s TV offerings, but you’ll always land a decent set that the whole family can enjoy.

The H8G Quantum Series is no different. Currently retailing for $500 for the 55-inch model, $700 for the 65-incher and $1,300 for the 75-incher, these are rock-solid price points for a TV of this quality—although the nearly doubling of the price from the 65-incher to 75 is a bit overdone.

If you decide to go with the 65-inch model, you’ll be receiving quite a bundle for only $700. Like the more well-known Samsung QLEDs, the H8G fully utilizes quantum-dot technology in their panel displays, boosting the overall color reproduction that you can actually see. The set also features Dolby Atmos, Dolby Vision HDR, built-in Google Assistant and Android TV.

In the 2020 refresh, the H8G now comes with local dimming zones that keep the screen dark in areas that need to be and has a peak brightness of 700 nits.

Roku is still the recommended option for a built-in operating system, but Android TV does hold its own here. This platform boasts a highly customizable interface, a mammoth app library and smart-home integration.

Like on Roku, you’ll have access to Netflix, Hulu, Disney Plus, Amazon Prime and all of the other streaming giants, in addition to getting your hands on nearly every app imaginable. Not to be outdone, there is a healthy selection of games that you can download and play by using your remote or Android TV Gamepad.

Speaking of the remote, what comes with the H8G is quite ordinary. You can bring up Netflix or YouTube with a single press, but it is noticeably lacking after that. There’s also no backlighting, so if you’re in a dark room, it could be difficult to see which buttons to push.

On a more positive note, Hisense seems to have put in the necessary work to upgrade its clunkier designs of previous years. This particular model boasts an elegant, near-bezel-less display that could give Samsung’s QLED HDTVs a run for their money.

The H8G also provides plenty of ports for your external entertainment hardware. They include four HDMI inputs, one with audio return channel (ARC) support, two USB ports, an Ethernet port and one optical port.