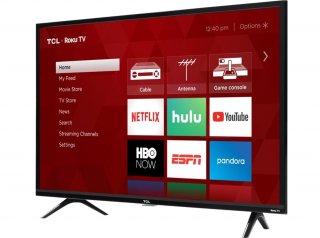 Perhaps you’re in the market for something that isn’t too fancy without all the bells and whistles—a decent panel that will do the job in the kitchen or the bedroom.

Well, for the price you would pay for a nice dinner and drinks, you can get yourself the TCL S325 series, in which the 32-inch model will only set you back $130.

If you’re thinking that this is some kind of hidden steal that can replicate the picture quality of OLED and QLED panels, you can drop those high hopes now. No, the TCL S325 series won’t come close to matching up with those much-vaunted panels, but ask yourself this: How much resolution do you really need when you watch the news or late-night talk shows?

Despite delivering only pedestrian picture quality at 720p resolution, you won’t end up being ashamed of it—but you definitely won’t be bragging about it, either. The black-level performance and contrast ratio are passable and wide-angle viewing is not recommended, so try not to have any side seating.

The color is slightly blue-tinted due to the white LED backlighting, and if you do use the set for DVDs, the viewing experience is satisfactory. It isn’t that bad for gaming as well, even though the 60Hz panel could be a bit laggy.

By far, the best aspect of the TCL S325 series is the built-in Roku, which, along with Android TV and LG’s webOS, is considered one of the top smart TV platforms out on the market right now—and it’s basically free with the TV.

Roku boasts an incredibly intuitive and user-friendly interface, making it a breeze to quickly find what you want to watch for family movie night. Toggling between the numerous apps and devices is also a snap, as you don’t have to physically deal with all of the buttons and switches of separate devices.

The streaming offerings on Roku are plentiful, giving you simple access to just about every app available, including Netflix, YouTube, Amazon Prime Video and Hulu. Also know that since the apps are built-in, you can get to them faster and more easily than via an external streamer.

If a new streaming app hits the market, you can bet that Roku will know that and you’ll quickly have access to it. With frequent updates and feature improvements, it seems that Roku is always looking out for your TV-watching needs.

Roku Is the King of All Streaming Players. But Can It Make Money (and Survive)?