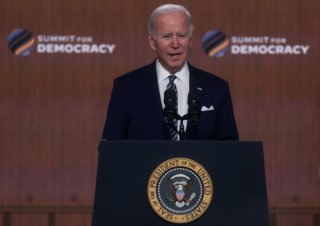 The Biden administration gathered participants from over 100 countries on Thursday for a virtual “Summit for Democracy“ organized around three themes: “defending against authoritarianism, fighting corruption, and promoting respect for human rights.”

In the summit’s opening speech, President Joe Biden warned against democratic backsliding amid the rising threat of autocracy. “We stand at an inflection point in our history… Will we allow the backward slide of rights and democracy to continue unchecked? Or will we together have a vision...and courage to once more lead the march of human progress and human freedom forward?” he said, adding that “Democracy doesn’t happen by accident. We have to renew it with each generation.”

Without explicitly mentioning Washington’s policy of values-based confrontation with China and Russia, Biden denounced “outside pressure from autocrats” who “seek to advance their own power, export and expand their influence around the world, and justify their repressive policies and practices as a more efficient way to address today’s challenges.” The Biden administration’s decision to invite Taiwan as a participant has prompted outrage from Beijing, with Zhao Lijian, the Chinese Foreign Ministry spokesperson, accusing Washington of using democracy as “a cover and a tool for it to advance its geopolitical objectives, oppress other countries, divide the world and serve its own interests.” The summit is being held in the context of the U.S.-led campaign to corral a diplomatic boycott of the upcoming Winter Olympics in Beijing, citing the “ongoing genocide and crimes against humanity in Xinjiang and other human rights abuses”—the boycott has so far been joined by Canada, Australia, and Britain.

In a joint op-ed written for The National Interest, the ambassadors of Russia and China to the United States, Anatoly Antonov and Qin Gang, decried the summit as the manifestation of a “Cold-War mentality.” The op-ed called on the United States to stop using “values-based diplomacy” as a tool of division and confrontation while arguing that both Russia and China are functioning democracies in their own right. “There is no need to worry about democracy in Russia and China,” the op-ed continued, adding that “certain foreign governments better think about themselves and what is going on in their homes.”

Beyond expected pushback from Washington’s principal geopolitical rivals, the summit has incurred controversy among American allies. Hungary, a member of NATO and the European Union, did not receive an invitation. The snub was negatively received by some of Prime Minister Viktor Orban’s Hungarian critics, who argue that it will only further alienate Budapest from the West and exacerbate the same domestic authoritarian trends that Hungary’s exclusion was intended to counteract. Even as Orban’s allegedly authoritarian behavior was deemed disqualifying, Kiev received an invite despite Ukrainian president Volodymyr Zelensky’s ongoing censorship of opposition media, prosecution of opposition politicians, and restrictions on foreign journalists.

“This summit is not about taking sides,” said Under Secretary for Civilian Security, Democracy, and Human Rights Uzra Zeya at a special press briefing on Tuesday. “It’s not meant to be divisive or adversarial. It really is all about an affirmative agenda with fellow democracies to lead by example, to learn from one another, to demonstrate how and why democracies are working to deliver for their people.” Yet experts are concerned that sorting countries by values-based labels could spark geopolitical tensions and, in the case of the Asia-Pacific region, expose invitees like Indonesia and South Korea to Chinese economic or political retaliation.

Advocacy groups, commentators, and think tanks that otherwise agree with the concept of an event empowering the global cause of democracy have sharply criticized aspects of the summit’s execution. Laura Thornton, director and senior fellow at the Alliance for Securing Democracy at the German Marshall Fund, noted that the Summit for Democracy’s participant selection process was ironically undemocratic, with no clear rubric or any other kind of procedural transparency. Thornton outlined a slew of questionable invitation decisions: the authoritarian Democratic Republic of the Congo made the cut, while the democratic government of Bolivia did not. Others questioned the logic behind hosting Pakistan—which was invited but not to attend—though not Sri Lanka or Singapore, both of which scored significantly higher on Freedom House’s Global Freedom index. Observers see a larger, troubling trend in these omissions; as noted by journalist Debasish Roy Chowdhury, over 30 percent of the summit’s 110 invitees are classified by Freedom House as only “partly free.” American University professor James Goldgeier and Duke University professor Bruce Jentleson warned that doling out invites to partially authoritarian regimes risks fostering the perception that the “Biden team is letting them off the hook regarding their undemocratic trends,” thus inadvertently facilitating the democratic backsliding that the summit is intended to combat. Critics sympathetic to the summit’s core mission argue that its raison d’être would have been better served with a less state-centric approach, instead structuring the event around civil society leaders and activists from democratic and undemocratic countries alike.

The summit was billed by the Biden administration as a global rallying point for democracies united around shared values and a common vision for the future. What emerges instead is a jumbled affair, as strategically wrongheaded as it is morally dubious. “Values are Interests,” reads a popular refrain among the event’s proponents and participants. But the Summit for Democracy has staked out the worst of both policy worlds, muddying American values with its gross inconsistencies whilst betraying core national interests with its many needless provocations.