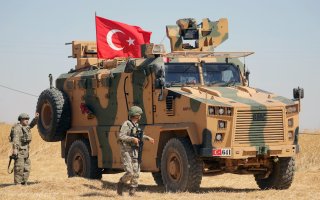 On November 20, Turkey launched “Operation Claw-Sword,” an extensive campaign of airstrikes on northeast Syria. Turkey targeted over 265 sites, including civilian infrastructure, destroying a school, hospitals, grain silos, electrical and water plants, and oil facilities. Ankara’s attack led to twenty-eight deaths, including fourteen civilians. Most stunning was the airstrike on the joint base of the U.S.-led Coalition to Defeat Daesh and the Syrian Democratic Forces (SDF), just 130 meters from American personnel. As the United States called for de-escalation, Turkey continued airstrikes targeting security forces guarding the Al-Hol Camp, which holds over 50,000 relatives of ISIS fighters. Fortunately, only a few families escaped and were later re-captured by security forces.

President Recep Tayyip Erdogan has announced plans for a ground invasion of northern Syria. During Turkey’s invasions in 2018 and 2019, multiple organizations documented horrific atrocities, with Turkish and Turkish-backed forces targeting religious and ethnic minorities, including Yazidis, Christians, and Kurds, especially women. Genocide Watch said, “Turkey has committed war crimes and crimes against humanity in Northern Syria. In areas under Turkey’s control, civilians have been subjected to horrific crimes against humanity committed by Turkish forces and Turkish supported militias.” Amy Austin Holmes, then a fellow at the Wilson Center, testified that members of religious minorities “have been killed, disappeared, kidnapped, raped, detained, subjected to forced religious conversion, and held for ransom until their families pay exorbitant sums of money to secure their release. Their places of worship have been destroyed, defaced, and looted. Even their cemeteries have been demolished and vandalized.”

These war crimes continued even after the invasion was complete, with atrocities carried out in areas governed by Turkish-backed Islamist militias. United Nations war crimes investigators warned that “Turkey must rein in Syrian rebels it supports in northern Syria who may have carried out kidnappings, torture and looting of civilian property.”

Why should the United States care enough about northeast Syria to stop the ongoing Turkish attacks and another invasion? For starters, the SDF has been the United States’ main partner in the fight against ISIS. The Kurdish People’s Protection Units (YPG) and Women’s Protection Units (YPJ) first partnered with the United States during the battle of Kobani, which ended in January 2015 and turned the tide as the first victory against ISIS. With continued American air support and weapons, they bravely retook Manbij, Raqqa, and other areas from ISIS, culminating with the final battle of Baghuz in February 2019. By this point, they had become the Syria Democratic Forces (SDF) that is majority Arab including Syriac-Assyrian Christian units as well.

While Turkey has insisted that it is a more effective partner in the fight against ISIS, it is clear that Ankara was complicit in the group’s growth. In fact, Brett McGurk, the White House’s coordinator for the Middle East, said in 2019 that the 40,000 foreign fighters who joined ISIS “all came through Turkey.” Moreover, ISIS was almost eliminated before Turkey’s 2019 invasion, and Ankara’s continued attacks since have empowered ISIS to rebuild.

While the SDF was liberating areas from the ISIS caliphate, it was also empowering local citizens to build a system of self-governance, now called the Autonomous Administration of North and East Syria (AANES). Organizing each neighborhood through communes, usually with around 100 families (no more than 300), the residents elected male and female co-chairs and vice co-chairs and established ten committees open to all residents to manage their own affairs. Several communes are combined to make a subdistrict, and several subdistricts together make a district, followed by a canton, a region, and finally, the AANES level. The regional government and AANES levels have three branches of government run by elected leaders: the Executive Council, the Legislative Council, and the Justice Council.

Members of every ethnicity and religion are carefully included in the AANES’ leadership, with co-chairs and vice co-chairs representing all the diversity of their own communities, including Kurdish and Arab Muslims, Syriac-Assyrian Christians, Armenian Christians, Yazidis, Alawites, Circassians, Turkman, and others, with half of all leaders being women. In 2020, working with Freedom Research Foundation, I spent one month in northeast Syria researching the government in four of the seven regions, visiting with committee members and co-chairs at every level of government. We found that the AANES actually had an over-representation of religious and ethnic minorities in official positions, which created a society where all were welcome regardless of ethnicity, religion, or gender. Indeed, the AANES has three official languages: Kurdish, Arabic, and Syriac.

The AANES is not some hastily thrown-together government but a carefully planned democracy that fills the governance and security voids that normally develop when bad actors are eliminated. Imagine if the security and governance voids in the Nineveh Plains and Sinjar had been filled by the residents, including the diverse religious and ethnic minority communities that live there, rather than by the Iranian militias who stepped into the gap. The AANES has shown us that governance is the way to make permanent the gains won during military action. This is how to stop a “forever war.”

I first learned about this remarkable society and the incredible religious freedom conditions from the U.S. Commission on International Religious Freedom (USCIRF), where I served for four years, including as chair during my final year. At USCIRF, we highlighted the conditions in the AANES with two hearings. In both hearings and in numerous reports, USCIRF contrasted the positive conditions under the AANES and the region’s role as a refuge for religious minorities against the problematic areas under the Assad regime, Turkish occupation, and Hay-at Tahir al-Sham, a jihadist group.

During a trip to northeast Syria this past May, I visited a newly built church of mostly Christian converts. I was stunned to see flowers sent with a congratulatory note from an Islamic organization of Imams. (Where else does that happen?) Later that week, in Raqqa, I met with members of the Muslim community coming from the opening of an Armenian Christian church in the center of town. It is hard to believe that some of these areas were part of the ISIS caliphate just five years ago.

With Turkey’s economy crumbling, Erdogan is now deeply unpopular at home. He is using the fake threat of “terrorism” emanating from Turkey’s southern border to rally support before next year’s elections, even though there have been no unprovoked border attacks from Syria. The terrible Istanbul attack on November 13 provided Erdogan with the perfect pretext to make accusations against the Kurdistan Workers’ Party (PKK) and, by extension, the people of northeast Syria (who are not the PKK). The suspect does not appear to be Kurdish, and there are many conflicting claims that don’t add up. Erdogan is known for falsely accusing Kurdish opponents of being PKK members, so this is nothing new.

The United States must not allow Erdogan’s lie to be used as an excuse for an invasion of northeast Syria. While many in northeast Syria were affiliated with the PKK in the past, the AANES and the SDF are not part of the PKK. The people of northeast Syria built their government to provide a future for their families, not to target Turkey. They are as much a threat to Turkey as Taiwan is to China. It is Turkey that is a threat to freedom, peace, and security in Syria. It is up to the United States and the international community to make the consequences of invading Syria too high for Turkey.