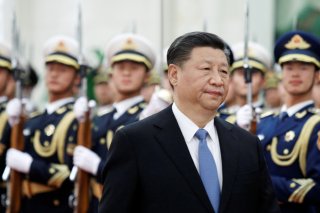 Joe Biden has assumed the helm of a nation rent by deep political divides. But even as the new administration continues to grapple with chronic distrust from millions of Americans, there is one place where the advent of a Biden presidency was hailed with overwhelming praise: China.

Beijing has followed up on its prior messages of goodwill to Biden in the aftermath of the 2020 election in order to formally congratulate the president on his inauguration. “Indeed, we had a hard time,” said China’s Foreign Ministry Spokesperson Hua Chunying, referring to U.S.-China relations under the Trump presidency. “I think people in both countries deserve a brighter future after such difficulties. I notice the American media said this is a new day in the history of the United States. We also wish President Biden success in governing the country. So many times in his inaugural speech, President Biden stressed unity. I think this is also what China-US relations need now.”

Also, on the day of Biden’s inauguration, China’s foreign ministry rolled out targeted sanctions against twenty-eight Trump administration officials, including outgoing Secretary of State Mike Pompeo and White House trade advisor Peter Navarro. On the following day, the Global Times—one of China’s leading state news outlets—lavished praise on the incoming president in a staff editorial. The Global Times asserted that Biden’s “vision is closer to the reality of the US” and he is “much more rational,” than his predecessor. It also noted that Biden had inherited a fractured nation but there was hope that he will nonetheless succeed in implementing his political program. “President Biden has shown his courage to face the problem squarely despite [the difficulties of uniting] . . . if both the US and China focus on doing their own things well and stop fighting against each other, the two countries will move forward based on their existing foundations.”

But what should Biden’s program be? The Global Times has just the suggestion: “Trump's China’s policy has been a failure. This is evident from the comparison of the two countries’ development situation as he stepped down Wednesday. The restart of China-US cooperation is more in line with the US, overall interests.”

These recent developments reaffirm what has long been known about U.S.-China relations: Beijing commands a firm, remarkably nuanced grasp of American politics. At a time of unprecedented polarization in Washington, China’s foreign policy apparatus is leveraging Donald Trump and the Trump era as a convenient foil in its ongoing attempts to achieve a diplomatic reset with the Biden administration. By urging Biden to define his China policy against Trump’s failures, Beijing hopes to make Sino-American rapprochement politically palatable to the new administration. In their persistent references to “conservative forces” that are trying to poison U.S.-Chinese relations with their “racist rhetoric” and “populism,” China’s state-sponsored outlets are boxing Biden’s China policy into a narrowly partisan frame that appeals to sharp cleavages in American domestic politics in increasingly unsubtle ways. The underlying message is clear: If Biden wants to meaningfully distinguish himself from Trump and other “conservative forces,” then he must abandon his predecessor’s policies aimed at containing and confronting China.

This type of messaging has been a recurrent trend in Chinese public diplomacy all throughout the 2020 election cycle; the recent sanctions against former Trump officials, seamlessly interwoven with gracious overtures to Biden, are merely the culmination of longstanding Chinese discursive foreign practice. China’s recent behavior scarcely comes as a shock, but there is one major surprise: it’s not working. Indeed, it appears to be backfiring.

Despite its seeming lack of even the slightest partisan incentive to defend the outgoing administration, Biden’s team nonetheless condemned China’s anti-Trump sanctions on visceral terms. “Imposing these sanctions on Inauguration Day is seemingly an attempt to play to partisan divides,” said the Biden administration’s National Security Council spokesperson Emily Horne. “President Biden looks forward to working with leaders in both parties to position America to out-compete China,” she added. This statement could perhaps be written off—even if not entirely convincingly—as a natural extension of Biden’s exhortations to domestic “unity,” but his choice of inauguration guest cannot be so easily dismissed. Bi-khim Hsiao, Taiwan’s top representative and de facto ambassador in the United States was invited to attend, marking the first time since 1979 that Taiwan was formally represented at a presidential swearing-in.

Meanwhile, Biden’s key national security picks have not shied away from labeling China as a dangerous military and geopolitical competitor. Previously criticized for his lack of engagement with issues pertaining to China, Biden’s Defense Secretary nominee, retired Army Gen. Lloyd Austin, made it a point to stress the military threat from Beijing during his Senate Armed Forces Committee confirmation hearing. “We’ll have to have capabilities that allow us to hold—to present a credible threat, a credible deterrent, excuse me, to China in the future,” he said, before listing some areas of continued military investment. “And so I believe that we still have the qualitative edge and the competitive edge over China. I think that gap has closed significantly and our goal will be to ensure that we expand that gap going forward.” In a subtle, but explicit break from Biden’s campaign-trail focus on Russia as Washington’s primary antagonist, Austin suggested that the threat from Beijing could outstrip the threat of Moscow: “Clearly the strategy will be arrayed against the threat and China presents the most significant threat going forward because China is ascending. Russia is also a threat, but it’s in decline. It can still do a great deal of damage as we’ve seen here in recent days. And it’s a country that we have to maintain some degree of focus on, but China is the pacing threat.”

It is far too premature to determine the long-term orientation of Biden’s China policy, but there is some early indication to suggest that Beijing’s long-sought diplomatic reset with the United States may not be in the cards. What that would mean for Washington’s broader eurasian grand strategy, particularly in light of the ongoing Korean conflict and rapidly deteriorating relations with Russia, remains to be seen.