Europe Needs to Go All in on Diversifying Oil and Gas 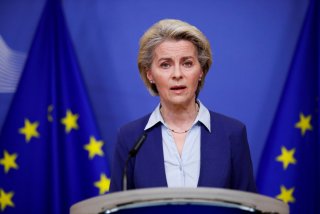 In the past, Brussels and Berlin made some awful choices regarding energy—choices that made Europe increasingly dependent on Russian gas. The Kremlin has been able to use this dependence to pressure individual nations—and sometimes even the European Union (EU) as a whole—to go along with development projects and stifle their objections to noxious policies that benefit Russia.

Vladimir Putin’s brutal invasion of Ukraine changed all that. European nations are now taking action to lessen their dependence on Russian energy.

The European Commission, for instance, has signed an agreement allowing Israel to increase natural gas deliveries to the EU through Egypt.

Rome, for its part, recently agreed to increase its cooperation with Algiers in the energy field. The deal makes Algeria Italy's main gas supplier.

Paris did not sit idle. It signed a partnership with the United Arab Emirates to boost the production of nuclear energy and hydrogen.

Last May, Germany reached a deal with Qatar about liquefied natural gas.

The EU recently inked a deal to obtain natural gas through the Southern Gas Corridor, a series of pipelines that transport gas from Azerbaijan to Europe via Georgia and Turkey.

Here is the bad news: This is not enough to meet Europe’s energy needs. Further, the notion these deals can serve as stop-gap measures to grease the transition to a continent powered by green energy is fanciful. Renewables will likely never produce enough to keep up with Europe’s future energy needs. And if Europe persists in trying to zero out carbon fuel, no one will invest in more gas and oil infrastructure. Why should they, if those assets will be forced to shut in a few years, with no opportunity to recoup their investments?

Some of the Middle Eastern and African countries where Europe wants to buy energy have close relations with Moscow. For example, Egypt and Russia cooperate in the nuclear energy sector, while Algeria has solid links with the Kremlin. Last April, Algiers voted against suspending Moscow from the United Nations Human Rights Council. Moreover, Russian foreign minister Sergey Lavrov visited the North African country in May to strengthen cooperation in the energy sector. The United Arab Emirates and Saudi Arabia have also recently improved their relations with Russia, mainly due to President Biden's mistaken policies on Iran and Yemen.

Libya has great potential as an energy supplier for Europe, but the country is a mess. Its political instability and lack of public safety make it a no-go zone for energy partnerships.

Of course, the United States could be a significant energy source, but the Biden administration remains committed to discouraging the expansion of oil and gas production as part of a forced “transition” to renewable energy. That needs to change.

The United States and European countries, such as Italy and Germany, should adopt more practical, effective energy policies. These would include increased domestic exploration and the development of carbon-based fuels and opening—and reopening—nuclear power plants.

The United States and the European Union should also move quickly to strengthen ties in the gas sector. This would guarantee a further reduction in dependence on Russian gas, alleviating the threat of Moscow's geopolitical pressure.

Further, the White House should push to strengthen the southern flank of NATO. Europe will need to get additional fuel from Africa (including Libya), the South Caucasus, and Central Asia. It makes sense to have a more secure and defensible flank for these energy corridors. It would also serve as a check on Russia, whose influence in the eastern part of Libya has been deeply destabilizing.

Finally, more pipelines, such as the proposed EastMed gas pipeline, would be helpful. EastMed would connect Israel to Cyprus, Greece, and Italy; Jerusalem and Rome support the project. A Trans-Caspian pipeline could also help deliver additional energy to Europe. The Three Seas Initiative should include traditional gas and oil projects to help speed the process of improving European energy security.

A Heritage Foundation vice president, James Jay Carafano directs the think tank’s research on matters of national security and foreign relations. Stefano Graziosi is an essayist and a political analyst who writes for the Italian newspaper La Verità and the weekly magazine Panorama.