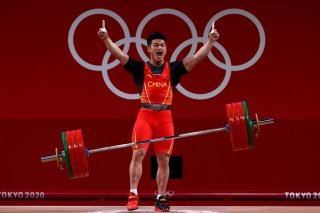 The Tokyo Olympics offers an apt analogy for reflecting on the much more consequential geopolitical Olympics in which China is challenging the United States today. In the century-long history of the modern Olympics, when did China win its first medal? Not until the 1984 Games in Los Angeles. Just a quarter-century later, in the 2008 Beijing Olympics, China displaced the United States from its accustomed position as No. 1—taking home forty-eight gold medals to the United States’ thirty-six.

While the United States snapped back in 2012 and 2016, the outcome of this summer’s games looks to be tight. Most betting sites have the United States winning forty gold medals to China’s thirty-three. But curveballs and caveats abound: tight rules have banned spectators and excluded elite athletes who failed Covid-19 tests. Meanwhile, several favored U.S. Olympians have stumbled in early competition. Sportswriters can be forgiven for repeating Yogi Berry’s one-liner about baseball: “It ain’t over till it’s over.”

In the geopolitical Olympics, China’s rise to rival the United States has been even more dramatic. Only two decades ago at the dawn of the twenty-first century, China did not even appear on the league tables of any geopolitical competition. Economically, it was classified as a “poor, developing country” (and thus allowed to join the World Trade Organization on terms reserved for developing economies). Technologically, with a per capita income at roughly the same level as Guyana and the Philippines, its citizens did not have enough money to buy advanced computers or cellphones, much less the resources to produce them. Militarily, it was for the Defense Department inconsequential, covered as what it called a “lesser included threat.” Diplomatically, it sat quietly, following Deng Xiaoping’s guidance to “hide and bide.”

But that was then.

In the past two decades, China has risen further and faster on more dimensions than any nation in history. As it has done so, it has become a serious rival of what had been the world’s sole superpower. Moreover, to paraphrase former Czech president Vaclav Havel, all this has happened so quickly that we have not yet had time to be astonished.

Who is today the manufacturing workshop of the world? Who is the No. 1 trading partner of most nations in the world? Who has been the principal engine of economic growth in the decade and a half since the Great Recession of 2008? By the yardstick that both the Central Intelligence Agency and the International Monetary Fund have concluded is the best single metric for comparing national economies, who has the largest economy in the world?

In the military arena, who has eroded America’s competitive edge in every domain of warfare to the point that “today, every domain is contested: air, land, sea, space, and cyberspace”—in the words of former Secretary of Defense Jim Mattis? While the United States remains the only global military superpower, in the Department of Defense’s most carefully constructed simulations of conflict over Taiwan, who has won eighteen of the past eighteen war games—according to former Deputy Secretary of Defense Bob Work?

Who is the largest producer and consumer of automobiles? Who does Elon Musk see as the largest market for Teslas and other electric vehicles? In the technology likely to have the greatest impact on economies and security in the next generation—artificial intelligence (AI)—who is the clear leader in facial recognition, voice recognition, supercomputers, and fintech—in the judgment of Eric Schmidt, the former CEO of Google (which is the leading AI company in America)?

Readers who hesitate before answering these questions will find bracing the forthcoming Report from Harvard’s China Working Group on the “Great Rivalry: China vs. the US in the 21st Century.” Prepared as part of a package of Transition Memos for the new administration after the November 2020 election, chapters of the report have been provided to those leading the Biden administration’s strategic reviews (as well as to those who had been heading up plans for a second Trump term). After the Biden team and leaders of Congress have had an opportunity to use them in whatever ways they find helpful, the chapters will be published later this year as Harvard Kennedy School Belfer Center Discussion Papers. But since there have recently been a number of public comments and inquiries about the report, this essay previews some of our key findings.

The specific assignment to which our report on the “Great Rivalry” responds was “to document what has actually happened in the past two decades in the array of races between China and the US.” The goal was to provide an objective database that could serve as a foundation for policymakers who would undertake a fundamental strategic reassessment of the China challenge. Five chapters drill down on the rivalry in five core arenas of power: economic, technological, military, diplomatic, and ideological. Each chapter begins by identifying criteria, metrics for assessing various races, and the best-unclassified sources of data on each topic. Each then summarizes the evidence about what has happened over the past two decades and concludes with a candid assessment of where the competitors now stand.

In offering judgments, we have made our best effort to follow the lead of judges in the Olympics: scoring results impartially according to established criteria. For example, in assessing where the United States and China currently stand in AI applications for voice recognition, we report the results of Stanford’s international challenge for machine-reading, where Chinese teams won three of the top five spots, including first place. In most of these races, this means reporting that China’s performance has improved dramatically. But as the report explains, these advances should not be surprising, since China has essentially been playing catch up, closing gaps by copying technologies and practices pioneered by the United States and others.

Nonetheless, for Americans—including us!—news about China overtaking us and even surpassing us in some races is unsettling. Indeed, as students of international security, we recognize that the international order the United States has led for the seven decades since World War II provided a rare “long peace” without war between great powers, and larger increases in health and prosperity worldwide than in any equivalent period in history. The impact of China’s meteoric rise on that order is thus a matter of deep concern. But as John Adams repeatedly reminded his compatriots as they fought for freedom against the most powerful nation in the eighteenth-century world: “facts are stubborn things.”

In brief, the major findings of our report across the five arenas are these. First, China is not only rising. It has already risen to a point that it has upended the post-Cold War order: geopolitically, economically, technologically, militarily, diplomatically, and politically. Washington officials continue straining to see China in our rearview mirror. They insist that it is no more than what they call a “near-peer competitor.” Reality says otherwise. The time has come to recognize China as a full-spectrum peer competitor of the United States. As such, it poses a graver geopolitical challenge than any American living has ever seen.

The difference between the terms is not just semantic. If our assessment is correct, the Director of National Intelligence’s 2021 Global Threat Assessment describing China as “increasingly a near-peer competitor” is wrong. And the difference matters. Ask American athletes in Tokyo about peer competitors.

Second, China has not only overtaken the United States in a number of significant arenas, including the size of its economy, but has established leads the United States is unlikely to recover. While many readers may find this hard to believe, they should consider the arithmetic. Since China has four times as many people as the United States, if Chinese workers were only one-quarter as productive as Americans, their gross domestic product (GDP) would equal that of ours. GDP, of course, is not everything. But it forms the substructure of power in relations among nations.

Third, if both nations continue on their current trajectories, by 2030, China’s economy will be twice the size of America’s. Moreover, in many other sports that the United States has traditionally dominated, China is likely to have sustainable advantages. Painful as it will be, Americans will have to find some way to come to grips with a world in which, at least in some realms, “China is No. 1.”

Fourth, in contests like the Olympics, winning the largest number of medals is essentially a matter of national pride. In core geopolitical rivalries, however, including GDP, relative military capabilities for potential conflicts (for example, over Taiwan), or leadership in frontier technologies like AI, if China succeeds in winning gold medals that we should have, the consequences for the American economy, American security, and the American-led international order will be profoundly negative. Anyone who has doubts about what life under Chinese rules looks like should watch what is happening in Hong Kong.

Fifth, contrary to those for whom these findings lead to defeatism, the authors of the Harvard report decidedly do not believe that this means “game over” for the United States.  Historically, American democracy has been slow to awake to great challenges. On the battlefield, had its greatest wars ended after the first innings, American colonists would have never become independent, Germany would have emerged the victor in World War I, Asia would now be a grand Japanese co-prosperity area, and Europeans would be speaking German in a Nazi empire. Had the United States not made the Soviet Union’s launch of the first satellite into space a “Sputnik moment” of awakening, the United States would not have been the first nation to send a man to the moon.