How the West Can Pull Russia to the Negotiating Table 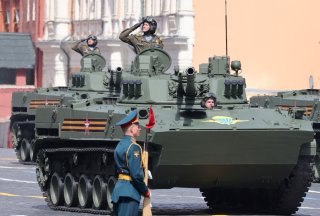 As Russian president Vladimir Putin talks about “returning” Russian lands and compares himself to Peter the Great while Russia advances near Severodonetsk, the prospects of peace wane. But will a prolonged war of attrition really benefit Russia? Probably not.

Ukrainian foreign minister Dymetro Kuleba argued last week that only Ukrainian advances on the battlefield can persuade Russia to come to the negotiating table. If Ukraine gains momentum on the southern and eastern fronts, the likelihood of this outcome will certainly increase, but it is an open question whether Ukraine can make significant advances on the battlefield. Ukrainian forces have higher morale than the Russians, but they are outgunned by a significant margin. In Kuleba’s own words, Russia has a fifteen-to-one superiority over Ukraine in terms of artillery power. So, how many rocket launchers and howitzers will Ukraine need in order to launch an effective counter-offensive? “Hundreds of multiple-launch rocket systems and various 155-mm artillery pieces,” says Kuleba. “We also need anti-ship missiles, tanks, armored vehicles, air defense, and combat aircraft to be able to launch effective counterattacks,” he adds.

Western countries will keep providing Ukraine with arms, but they can hardly meet the quantities that Ukraine is demanding. After long debates, the United Kingdom and Germany both approved the transfer of only three multiple-launch rocket systems, while the United States has provided four High Mobility Artillery Rocket Systems (HIMARS) and is considering transferring another four. Even if Western nations were able to find a solution for financing the massive amount of money that meeting Ukraine’s demands will require, they are restrained by other strategic considerations. Russia has enormous leverage over Europe’s energy supply, and winter is around the corner. Furthermore, inflation is soaring, the West wants to avoid escalation, Kissinger warns of Russia becoming a Chinese outpost in Europe, and French president Emmanuel Macron is attempting to “build an exit ramp” for Russia “through diplomatic means.”

The most likely scenario is that neither side will be able to achieve its maximalist goals on the battlefield, leading to a prolonged war of attrition. But a prolonged war of attrition can hardly be in Russia’s interests. Russia is running the risk of fully alienating the Ukrainian people, and a prolonged war will only make this more likely. Putin knows that the Ukrainians are resolved to defend their homeland and that the West is determined not to let Ukraine fall. Last week’s announcement of a new $1 billion U.S. military assistance package and the visit of European leaders to Kyiv reaffirmed this commitment. Is it in Russian interests to take all these risks to possibly capture a few Ukrainian cities? Does Putin want to end up in a situation where few Ukrainians speak Russian in the future? Is this the kind of legacy that Putin wants to leave behind?

Russia can instead seek to include preserving cultural and language ties between the two nations in negotiations. Many Ukrainians—like many Russians—consider the war to be “Putin’s war” alone, which may play a crucial role in salvaging the Russian language in post-war Ukraine. Russia may also reconsider its views toward the Ukrainian language. Learning the Ukrainian language does not mean abandoning the Russian language. In all post-Soviet countries besides Belarus, native languages are extensively used in everyday life, but many people still learn Russian.

As skeptics rightly point out, Putin is deeply invested in this war and will not be willing to agree to any deal “that could be judged at home to constitute defeat.” But a prolonged war of attrition—in which several hundred Russian soldiers may die daily, insurgencies may erupt in Kherson, Melitopol, and other Ukrainian cities, and sanctions further choke Russia’s economy—can hardly be judged as a victory at home either. Negotiating a buffer status for Ukraine will provide the Russian regime an opportunity to declare success at home, as the supposed expansion of NATO into Ukraine was the main excuse that Russia used to invade Ukraine in February.

In addition, there are other mechanisms that can be employed to put extra pressure on Russia so that it will more seriously consider engaging in peace talks. Niall Ferguson has advocated a U.S. policy of détente vis-à-vis China in which, “with a little Chinese pressure on Putin,” a move toward ending the war in Ukraine can be pursued. “[J]oint U.S.-China pressure on the Arab oil producers” could be applied to increase oil production in a serious way, adds Ferguson. Increased oil production will put significant pressure on Russia, as the hike in oil prices since the beginning of the invasion has been a key enabler of Moscow’s war on Ukraine. Russia earned a record $97 billion from fossil fuel exports in the first 100 days of the war, $64.5 billion of which came from oil revenue.

Russia may also be incentivized to enter negotiations if it receives a pledge that incremental sanctions relief will follow its implementation of a negotiated peace deal with Ukraine. Another card that can be played by the West is NATO expansion into Sweden and Finland. The process of the two countries joining NATO has been stalled by Turkey’s opposition. Bringing Sweden and Finland into the alliance may have its pros and cons for the United States and its allies. On the one hand, adding two strong member states could strengthen the alliance. On the other hand, it will extend U.S. and allied commitments in Europe at a time when a bigger strategic challenge in Asia requires more resources and attention. But this issue aside, it would be hard to dispute that ending the war in Ukraine is not more important than Sweden and Finland joining NATO. Russia has long opposed Sweden and Finland’s membership in NATO and will likely be willing to make concessions on Ukraine if their bid to join NATO seems imminent. Turkey may be willing to play nice if the resolution on the table could end the Ukraine war. After angering Russia by supplying effective Bayraktar TB-2 drones to Ukraine, Turkey returned to its policy of balancing between the West and Russia as soon as it became apparent that Ukraine is unlikely to fall. Turkey’s opposition to Sweden and Finland’s NATO bids should be seen primarily in this context.

Inflation in Turkey recently hit a twenty-three-year high of 73.5 percent, and the war in Ukraine is doing even more harm to the Turkish economy. A recent survey shows that public support for the ruling Justice and Development Party (AKP) has fallen to 26.5 percent, a near-historic low. President Recep Tayyip Erdogan will certainly welcome a boost to the Turkish economy, especially given next year’s presidential and parliamentary elections.

As Ukraine enjoys steadfast support from the West, it is unlikely that a prolonged war will paralyze the country as Russia hopes. By continuing the war, Russia runs the risk of entirely alienating the Ukrainian people, which could lead to generations of Ukrainians abandoning the Russian language. Avoiding this is incredibly important for Russia, and it is preventable if the Kremlin negotiates a buffer status for Ukraine.