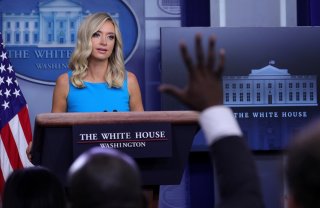 Michael Pack has a heavy load to carry. The new head of the U.S. Agency for Global Media (USAGM), must bear the weighty tip of the spear for American public diplomacy in an age of great-power competition—and the competition is fierce.  Rather than make him a dartboard for controversy, Washington should mount a bipartisan effort to make him successful.

The World We Got

Great-power competition is the defining challenge of our times—one that requires our united strength. President Donald Trump has rightly reoriented American foreign and security policy on great-power competition. Critics could argue that anyone elected president would probably have made the same decision. And they’d be right. There is a strong Washington consensus that the greatest external threats to American peace and prosperity are the nations that see American power as an obstacle to their designs.

Further, no matter what politicians say on the campaign trail, there will be a lot of policy continuity in these areas over the next four years, regardless of who is in the Oval Office. That’s because the challenge isn’t changing, nor is what the United States must do to protect its global interests and meet its global responsibilities.

Still, in responding to challenges, there is always space to improve. If there is one instrument of national power that hasn’t always played in tune, then it is all our capabilities related to public diplomacy.  This administration could have done a much better job selling its constructive vision of American global leadership in a time when others are trying to tear us down.

One of the real weaknesses has been the performance of USAGM. To be fair, the administration inherited a rusty apparatus.

USAGM is an independent federal agency charged with promoting freedom and democracy worldwide, delivering objective, honest reporting and programs. Many can recall the glory days of the agency’s predecessor, the U.S. Information Agency and efforts like Radio Free Europe, that inspired generations of Central Europeans to fight for their own freedom, bringing down the Iron Curtain and the collapse of the Soviet’s evil empire.

But the Cold War ended over forty years ago and. arguably, this once grand instrument of public diplomacy has underperformed ever since. Yet repeated reorganizing and restructuring, under Republican and Democratic administrations, has not made much of a difference.

The agency has not had decisive strategic leadership since the start of this administration. USAGM has been challenged keeping up with the revolutionary changes media and global media environment, global completion, particularly from Chinese state media and Russian disinformation, and riddled with internal controversy and division over how to meet its mission.

There might be some pockets of excellence in USAGM, but this agency isn’t ready for the big game that is upon us.

There has always been a false debate over whether America’s information agency is there to serve America’s interests and policy goals or deliver objective reporting. The simple answer is: it’s there to do both.

When FDR created an information agency during World War II, the initial impulse of his political appointees was to stack the agency with New Dealers and use the organization to sell the New Deal to the world. Roosevelt put a stop to that. The purpose of the agency, he said, was to help win the war. The agency stuck to that mission. It enjoyed bipartisan support. And it helped win the war.

Despite the many controversies and divisive politics of the Cold War, the United States Information Agency (USIA), established by President Dwight D. Eisenhower in 1953, remained focused on its mission of leapfrogging the Iron Curtain. When the Polish dissident Lech Walesa, was barred from accepting his Nobel Peace Prize in 1983, he listened to his wife accept the award on Radio Free Europe. When later asked how important Radio Free Europe was to the Polish Solidarity movement he said, “What is the earth without the sun?”

When the Cold War ended, American public diplomacy languished. USIA was disbanded in 1999. Functions were disbursed among agencies in the State Department. Broadcast responsibilities were given to the Broadcasting Board of Governors.

Perhaps, the real post–Cold War problem was that the agency was never presented with a challenge, like the Cold War, that required it to rise to the occasion. There was never a vital interest that required everyone to put aside their politics, bureaucratic squabbling, and fiefdoms and agendas. Well, now there is.

Pack was put there to get America’s official media arm back in the game. In a letter to employees, he declared his mission is to honor the agency’s mission and “make the agency more effective.” That is standard we should hold him to. This is what we should all be looking for: