Pakistan’s Duplicity in Afghanistan Has No Limit 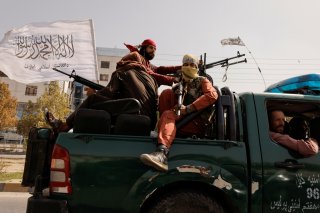 In February 2020, just days before the U.S.-Taliban Doha Agreement was signed, the intelligence community and military intelligence leaders from South and Central Asia gathered at a U.S. Central Command conference in Tampa, Florida. The topic was unconventional warfare, and one of the most electric moments was when a panelist described how the Pakistani security services had failed twice to get their puppet regimes recognized by the United Nations.

The two Pakistani Inter-Services Intelligence (ISI) generals present were at first angered that someone was exposing their campaign to control the Afghan government through proxy fighters. Later, one of the ISI leaders admitted that elements of Pakistan’s ruling powers had indeed backed the failed efforts of Gulbuddin Hekmatyar in the Afghan civil war and the Taliban militia in the 1990s and 2000s to gain UN recognition as the government of Afghanistan. He further admitted to the panelists and a U.S. Army general that Pakistan continues to back the Taliban-Haqqani campaign to retake Afghanistan.

To have two Pakistani officers admit in public that their nation continues to back and aid the Taliban-Haqqani terror network to defeat the Afghan republic and its NATO partners should have been a signal to the gathered intelligence community audience that Pakistan could not be trusted on counter-terrorism issues. Instead, the admission was met with a shrug. Doha was signed, and Pakistan took it as a green light to continue its efforts. Afghans took the Doha Agreement and, later, President Joe Biden’s decision to abandon all U.S.-Afghan security promises, as the United States handed the country over to terrorists headquartered in Pakistan.

No higher military authority than the senior uniformed advisor to the U.S. president, Chairman of the Joint Chiefs of Staff Admiral Mike Mullen, was clear to the American people in 2011 that Pakistan was playing Americans for fools. Indeed, the money the United States sent to Pakistan was ultimately funding the same terrorists that had been maiming and killing U.S. servicemembers for a decade. Even with this clear evidence, the United States refused to alter its policy enough to change Pakistan’s. As CBS reported, Mullen told Congress that:

Pakistani duplicity puts in jeopardy not only the frayed U.S.-Pakistani partnership against terrorism, but also the outcome to the decade-old war in Afghanistan. Success in Afghanistan is threatened by the Pakistani government's support for the Haqqani network of militants … a ‘veritable arm’ of Pakistan's intelligence agency. … Pakistani intelligence is using the Haqqanis and other extremist groups as its proxies inside Afghanistan. … Pakistan's government has chosen to ‘use violent extremism as an instrument of policy … by exporting violence, they have eroded their internal security and their position in the region. They have undermined their international credibility and threatened their economic well-being.’

After the Taliban-Haqqani terrorists took Kabul in 2021, then-Pakistani prime minister Imran Khan declared that the Taliban “broke the shackles of slavery” with the U.S. defeat in Afghanistan. The Pakistani government publicly expressed its pleasure with the fall of the Islamic Republic of Afghanistan and celebrated the Taliban's return. Pakistan openly proved Mullen correct.

After twenty years of war and international engagement, the prospects for lasting peace, stability, and an acceptable political settlement for Afghanistan envisioned both by the United States and the government of Afghanistan remained beyond reach as the Doha Agreement was being signed. Many regional players with a growing desire to intervene in Afghanistan emerged to help the Taliban—with the support of Pakistan.

Pakistan’s push to exclude the Afghan government from direct talks with the Taliban doomed the Doha process from its earliest stage. Russia, Iran, and China’s outreach to the Taliban, excluding India and Tajikistan, added strategic complexity to the peace roadmap designed by Washington. The Taliban and Pakistan were able to lock Washington in “peace talks” that didn’t go anywhere but served Pakistani interests.

The Afghan government’s desired end state for peace talks before the start of the Doha process was to take the lead, negotiate with the Taliban directly, and work with the United States to gain leverage. Afghans urged the United States to apply proportionate pressure on both Taliban and Pakistan for a political settlement acceptable to all in order to safeguard the political system of Afghanistan and prevent the total collapse of all progress since 2001. This was the simple request of the Afghan republic from 2009 until 2021.

Due to flawed international diplomatic efforts and Pakistani elements helping the Taliban-Haqqani terrorists undermine the government, the Afghan state fell in August 2021. Twenty years of achievement in state building, democracy, women’s rights, political development, and freedom of speech were eliminated.

Afghanistan once again turned into a safe haven for international terrorists, including the leader of Al Qaeda, Ayman al-Zawahiri, who was killed in August 2022 in a Taliban-Haqqani safehouse in Kabul. The economic system also collapsed, and Afghanistan is now facing a financial crisis that cannot be averted. The humanitarian disasters and the speed of human rights backsliding make Afghanistan a failed state again.

Islamic State Khorasan Province (ISIS-K)—which now claims independence from the Taliban but was formed from the ranks of the Taliban, Tehrik-i-Taliban Pakistan, and Al Qaeda—and many other regional terrorist groups are on the rise. The Taliban-Haqqani regime is oppressing civilians with arbitrary arrests, torture, and murder. According to local media reports, since the fall of Kabul to the Taliban, over 2,250 Afghan civilians have been killed and wounded. Genocidal terrorist attacks are carried out on the Hazara people, the latest of which killed over seventy students, most of them girls. Girls are barred from schools, women are banned from work and public life, and gender apartheid is imposed by the Taliban.

Many observers and international organizations who were closely watching the international community’s engagement in Afghanistan have also accused the Pakistani Army, the ISI, and the Pakistani government of soliciting funding for the Taliban-Haqqani regime, bankrolling their terrorist operations, and providing diplomatic support as the Taliban-Haqqani regime’s emissaries abroad. All actions today are consistent with Pakistani efforts to support the Taliban and the Haqqani network since 2001.

Now, we are seeing Pakistan reset the game. During his visit to Washington in early October, the head of the Pakistani Army presented the old mantra, trying to sell Pakistan’s leverage over the Taliban-Haqqani regime as an asset for the United States. The bill from Pakistan for “controlling” regional terrorists will be U.S. military funding and cooperation. But there will be no change in Pakistan’s view of cooperation with the United States; it will be the same story of duplicity.

A better option for controlling terrorists in South and Central Asia is to not trust Pakistan to keep any promises. Pakistan is essentially running a South Asian terrorism factory. The United States could instead back existing counter-terrorism actors in the region. Deepening strategic ties with Pakistan without balancing with India will prolong the existence of the terrorist safe haven that is the new Afghanistan. Washington should work with different (younger and new) Afghan actors and support their efforts to achieve enduring peace and stability in Afghanistan.

Afghans need the genuine support of the international community for an inclusive political dialogue. The Taliban proved that it is not committed to any political process unless it is under extreme pressure; diplomatic and economic pressure is not enough. The Taliban did not abide by the 2020 Doha Agreement, which committed it to an inclusive political process in Afghanistan. Handing all Afghan affairs to Pakistan will further encourage the Taliban-Haqqani regime to hold on to power with ruthlessness, which will exacerbate the risk of ethnic armed conflict in Afghanistan’s looming civil war.

Repeating past naïve U.S. policy toward Pakistan will not change the nature of the current crisis in Afghanistan. Relying on Pakistan and outsourcing Afghan affairs is doomed to failure and only delays an acceptable settlement in Afghanistan.

Additionally, pursuing the same policy toward Pakistan will increase national security threats to the United States and other Western countries. The Taliban-Haqqani regime is leading the world’s most brutal and sophisticated terror and religious syndicate. The regime is ramping up global terrorist recruiting efforts with the claim that it has defeated the West.

Afghans and their allies have been asking for years why the U.S. government would overlook the deceitful behavior of the Pakistani military and continue to partner with it on counter-terrorism and fund Pakistan military requests. Recently, the general of the Pakistani Army finally got his long-sought friendly welcome at the Pentagon. On October 21, Pakistan was taken off the grey list for terrorism financing after four years in the wilderness. What are victims of terrorism in South Asia supposed to think of this decision by the United States and global bodies, made just days after yet another suicide bomber murdered and maimed Afghan Hazara girls in an education center in Kabul?