Sideswiped: Why China Set Out to Shame the State Department 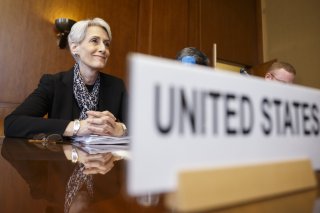 Deputy Secretary of State Wendy Sherman’s visit to China on July 26 appears to have been a reprise of the Biden administration’s previous high-level interaction with the Chinese—the March meeting in Anchorage between Secretary of State Antony Blinken and National Security Advisor Jake Sullivan and their Chinese counterparts.  Anchorage yielded little more than a mutual airing of grievances, Additionally, Sherman’s meetings in Tianjin with her direct counterpart Vice Foreign Minister Xie Feng and State Councilor Wang Yi amounted to much the same. There was talk of “setting the terms of the relationship” and establishing “guardrails” for managing it but there were no visible signs of progress in either respect.

As with Anchorage, low expectations flowed from the way the meetings were teed up on both sides. At a State Department pre-briefing, senior administration officials said the purpose of Sherman’s visit was to “have frank and honest exchanges about the relationship” and ‘keep the channels of communication open”—not to “negotiate over specifics.” Moreover, they emphasized that the backdrop of the visit was “stiff and sustained competition” between the United States and China in which the U.S. side is “strengthening our own competitive hand” and thus will be “entering this engagement from a position of strength and solidarity” with U.S. allies and partners.

This yielded an interim public response from Wang that echoed the tenor of Beijing’s presentation in Anchorage. “If the United States has not learned how to get along with other countries on an equal footing by now, then it is our responsibility, along with the international community, to give the U.S. a good tutorial in this regard,” Wang said. Indeed, Wang and Xie subsequently used the opportunity to lecture Sherman on what they characterized as Washington’s arrogance, hypocrisy, and responsibility for the downturn in U.S.-China relations. Xie played the role of the bad cop, accusing the United States of “portray[ing] China as an imagined enemy” and trying to redirect “U.S. domestic public discontent” by “blam[ing] China for its own structural problems.” He proclaimed that “one must not do to others what one does not like to be done to himself.”  But Wang asserted flatly that Biden has continued the Trump administration’s “extreme and wrong policy toward China” of trying to contain it and thwart its development.

The most pronounced aspect of Xie’s and Wang’s presentations to Sherman was their obvious attempt to mirror what Beijing perceives as Washington’s high-handed approach: to claim the moral high ground and the upper hand in the relationship. This included quoting American statements back to Sherman. The State Department pre-briefers had said the U.S. side was “going into these meetings with our eyes wide open,” so Xie affirmed that “the Chinese people look at things with eyes wide open.” Similarly invoking Blinken’s statement at Anchorage that “it’s never a good bet to bet against America,” Xie said, and “the U.S. should not bet on China losing.” Also, Wang said Beijing “has never been interested in betting on America’s win or loss.”  But the clearest effort to replicate U.S. practice came when Xie reportedly delivered to Sherman two lists. One list included sixteen U.S. actions that Washington needs to correct or reverse, including visa restrictions on Chinese Communist Party members, “suppression” of Chinese companies like Huawei, and designation of Chinese media outlets as foreign agents. The second list included ten areas of Chinese concern about U.S. behavior, including anti-Chinese sentiment in America, blaming China for the coronavirus, and challenging Chinese sovereignty over Taiwan, Hong Kong, and Xinjiang.

This suggests that Beijing is crossing—or has crossed—a threshold and calculates that it now has the international leverage and influence to push back against U.S. pressure, and to expect or demand reciprocity on the basis of “equality and mutual respect.”  This posture reflects Chinese leaders’ evolving assessment of the shifting balance of power in the wake of China’s “rise” and the United States’ relative decline. At the same time, the Chinese rhetorically and predictably overplayed their hand in this regard during Sherman’s visit.  Wang affirmed that “the great rejuvenation of the Chinese nation has entered an irreversible historical process that no force, no country can stop”—overlooking the possibility that China might inflict setbacks on itself.  For his part, Xie told Sherman a “desire to seek hegemony or territorial expansion is simply not in the Chinese DNA.”  China, he said, “has never coerced any country” or “gone to others’ doorsteps to provoke trouble,” and only “responds to foreign interference with legitimate and lawful countermeasures.” Xie noted that the United States is the true “inventor, and patent and intellectual property owner of coercive diplomacy.” Beijing is unlikely to win U.S. hearts and minds with such rhetoric. Additionally, the verdict issued by Chinese Foreign Ministry spokesman Zhao Lijian—the leading practitioner of Beijing’s “wolf warrior diplomacy”—after Sherman’s visit stated that “the U.S. side must change course and correct its mistakes” because “whoever tied the knot is responsible for untying it.”

The core question regarding Sherman’s visit is whether it will advance the goal of arresting the downward spiral in U.S.-China relations and create an opening for some stabilization or even a constructive turn in the relationship. Indicators of either are not yet apparent.  The State Department readout after the visit stated that Sherman, Wang, and Xie “discussed ways to set terms for responsible management of the US-China relationship,” but provided no details on those ways or those terms. Thus, there was no suggestion that any agreement was reached. And although the State Department readout reiterated the goal of “establishing guardrails” for the relationship, the Chinese side quoted Xie as saying that such guardrails “must be agreed upon by both sides” and “should not be unilaterally set by the United States as a behavior boundary for China.”

Wang offered what presumably constitutes three such terms for the relationship, all of them were boundaries for U.S. behavior. These terms state that the United States “must not challenge, denigrate, or attempt to subvert the socialist road and system with Chinese characteristics . . . try to obstruct or interrupt China’s development process . . . [or] infringe on China’s national sovereignty [and] territorial integrity.” All of these requirements would pose inherent challenges for the relationship, given prevailing US attitudes toward China’s political and economic system; U.S. policies that Beijing interprets as aimed at regime change, containment, and/or economic decoupling; and valid US concerns about Chinese policies toward Taiwan, Hong Kong, and Xinjiang.  On the other hand, any corresponding proposals from Washington are certain to pose symmetrical and fundamental challenges to Beijing.

Whether the two sides are ready to productively engage on “setting the terms of the relationship” remains to be seen.  Frankly, Sherman’s visit—like the exchange in Anchorage—provided scant evidence of it.  On the contrary, both sides hinted at skepticism about—if not resistance to—any form of mutual accommodation or even substantive engagement. The Chinese side gave lip service to “mutual respect, fair competition, and peaceful coexistence” but blamed the United States for their absence. China insisted that the ball is in Washington’s court to “change course” and “make the right choice.” For its part, the United States side said—oddly—that it “welcomes” stiff competition, apparently preferring it to any consideration of a mutually accommodative relationship.  And although Sherman and other Biden administration officials acknowledged the potential for U.S.-China cooperation on “important global challenges,” such as climate change, counter-proliferation, and regional security issues, they did not address the potential for U.S.-China cooperation on bilateral issues.  In addition, it was revealing that during the State Department readout after Sherman’s visit, one of the administration officials said “it would be wrong to characterize the US as somehow seeking or soliciting China’s cooperation” because “we believe that Beijing should have its own interest in working on many of these areas.” It is difficult to foresee significant U.S.-China cooperation in any area if one side is unwilling to be viewed as seeking it and is instead primarily focused on girding for competition. The other side is likely to mirror that mindset in both respects.

On balance, it appears for the time being that there will be no major constructive breakthrough in U.S.-China relations as long as strategic distrust outweighs mutual understanding. This stalemate will continue as long as Beijing and Washington calculate that they each have the balance of leverage with which to deflect the other’s proposed guardrails and terms for the relationship. In the meantime, their diplomatic interactions will be characterized more by exchanges of demands and complaints than by cooperation or its pursuit.  It is hard to disagree with Beijing’s admission that the relationship is “facing serious difficulties.”