Why the West Isn’t Confronting China Over Coronavirus 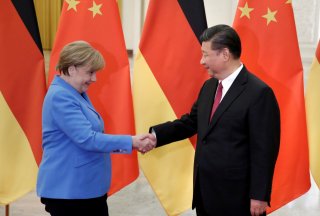 We are a year into the worst crisis to hit the globe since the Great Depression. Borrowing has skyrocketed, sending budget deficits and national debts to unheard-of levels, while repeated lockdowns and mounting public health concerns have fueled social unrest, strained political institutions, and left a trail of failed businesses in their wake. The “2020 Great Suppression” of the global economy is unprecedented. We simply have no idea at this point of the extent of the damage to our economic and social fabric that will likely continue to manifest itself long after this pandemic has run its course. And yet, quite remarkably, one rarely hears government officials, think-tankers and the media mention the name of the state that brought this devastation to us all.

In part, Western restraint in criticizing Beijing can be explained by our unprecedented and continued economic dependence on China for key manufactured goods and supplies that the offshoring of manufacturing has wrought onto the most advanced Western economies. The pandemic has exposed the extent to which the radical centralization of key supply chains owing to Chinese mercantilism (and Western greed) has made China the sole provider of key medicines, Personal Protective Equipment and other equipment needed to manage the global health emergency. The Western reticence to criticize China is also due in part to the extent to which the People’s Republic of China (PRC) has been able to influence and shape the direction of our internal policy debate, not just in the United States but also in Europe and elsewhere, with Beijing leveraging its access to every layer of Western societies. The PRC has been able to exploit the fissures in our domestic politics, benefitting from the hardening ideological divisions that have fractured the national consensus across the West such that we are incapable of facing up squarely to the existential threat that China poses to the United States and democracies worldwide. Lastly, the sheer scale of Western investment in China by an ever-larger number of U.S. and European transnational companies has made the task of confronting Beijing over the pandemic that much more difficult, for the near-term economic pain of decoupling from Chinese supply chains would be sharp and felt in short order.

And yet, the fundamental reason why democracies have thus far failed to confront China over its responsibility for the pandemic is the very scope of the challenge that it poses to the West, and the lack of consensus, especially between the United States and its European allies, about the nature of the threat. The United States sees China as both a military and economic problem set. Irrespective of how the U.S. strategy towards the PRC evolves in the next U.S. administration, the reality of the existential threat that China poses to U.S. vital interests, especially in the Indo-Pacific but also in other theaters, including at home, is not going away, notwithstanding occasional voices in Washington calling for a “détente” in U.S.-China relations. The scope of the challenge is directly tied to the size of the Chinese economy (still nominally smaller than the U.S. economy, but in PPP terms already several trillion dollars bigger than ours); this economic strength is now being translated by Beijing into usable military capabilities.

China’s growing military power and its geostrategic assertiveness in Asia, Africa, and increasingly in the Mediterranean and in Europe are now in full view.  The PLAN’s massive shipbuilding program, in particular, is a source of growing concern for the U.S.—in terms of the sheer number of ships the Chinese navy is already larger than the U.S. Navy, even if those combatants lag behind the capabilities of the U.S. fleet. The Chinese technology gap with the U.S. military is also narrowing. Decades of offshoring our industry and, more significantly, allowing China free access to our society at every level, including U.S. corporations and universities and research labs, have allowed the PRC to build a modern R&D base that may help it innovate and leapfrog the United States in key areas of emerging technologies going forward. The narrowing of the qualitative gap between U.S. and Chinese weapons systems is a direct result of decades of allowing globalist ideology to overshadow our national interest and strategic considerations after the Cold War when history was believed to have “ended.”

While America sees China increasingly as a cross-domain threat, Europe still considers it to be predominantly an economic problem set, and in many respects also as an economic opportunity. Access to the Asian market is considered vital to European manufacturing and exports without which the European social market model and political consensus resting on it would be difficult to sustain. Hence, the Europeans are eager to avoid being pulled into the hard security military dimension of the accelerating U.S.-China confrontation. So, while the European Union has awakened to Chinese predatory mercantilism and the attendant theft of intellectual property, it remains intent—at least for the time being—to maintain as much as possible the commercial status quo. The scope of European investment in China and the critical importance of the Chinese market (the PRC is Germany’s largest source of imports) give Beijing considerable influence on the continent. Much like in the United States, European corporate interests continue to lobby for the status quo to continue.

The challenge that China poses for the United States and the democratic world, in general, is orders of magnitude greater than the threat posed to NATO by the Warsaw Pact during the Cold War. China’s rise is occurring at a time when the United States is coming off two decades of continuous wars in secondary theaters, which not only consumed trillions of dollars but also restructured its military away from large scale combat operations against another great power. During the Cold War the United States faced only one near-peer military competitor: the Soviet Union—Maoist China was a regional player at best. The Nixon-Kissinger gambit that pulled it closer to the United States in effect lowered the cost of containment and contributed to America’s victory in the Cold War. In contrast, today we are confronted by two near-peer competitors in the military arena, for Russia is aligned with China in its opposition to the United States. Moscow remains determined to revise the post-Cold War settlement while Beijing wants to completely replace it with one built around its own power and geostrategic priorities.

The lack of consensus across the West about the threat that China poses to the international order is likely to remain the most intractable problem for NATO and transatlantic relations going forward, presenting a fundamental obstacle to building a workable joint strategy to outcompete China and preserve our dominant position. So long as such a consensus is missing, Beijing will be able to leverage the policy differences and divergent economic priorities of the United States and Europe to its benefit.

Andrew A. Michta is the dean of the College of International and Security Studies at the George C. Marshall European Center for Security Studies. Views expressed here are his own.