Without Alexandroupolis, Transatlantic Security Is Dead in the Water 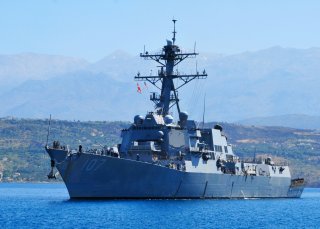 But the United States must act with purpose, in concert with its allies, to secure these goals for the short and long term. Europe can neither go cold turkey nor wean itself off slowly from Russian hydrocarbons without liquefied natural gas (LNG) imports from and through the eastern Mediterranean, which boasts significant—and growing—offshore reserves.

Given serious logistical bottlenecks extending eastward from the heart of the continent, combined with Turkey’s abandonment of its historical role as the alliance’s southeastern anchor, NATO needs new routes from the south to project power against Russia and China—both of whom are making serious inroads across the eastern Mediterranean and the Black Sea. At the same time, Ukrainian grain needs to circumvent a Russian naval blockade and the Turkish Straits as it heads south to the Middle East, Africa, and Asia.

Alexandroupolis is ideally situated to help, as a new report from the Jewish Institute for National Security of America (JINSA) explains. Ships docking at its deep-water port can unload directly onto, and load from, rail lines running through Bulgaria and Romania and as far north as Poland. In addition to an airfield and military facilities, the city is also the hub for a network of highways, as well as a U.S.-backed LNG import facility linked inland to an expanding lattice of natural gas pipelines.

This infrastructure enables NATO to bypass the Bosporus and Black seas and more effectively surge forces northward through Bulgaria and Romania up to the Ukrainian and Moldovan borders. In addition to creating an outlet for Kyiv’s food exports and new commercial alternatives to the Chinese-run port of Piraeus near Athens, it could also reduce the Balkans’ and Italy’s deep dependence on Russian energy by shipping more reliable supplies from the Eastern Mediterranean and beyond.

While American support has been crucial for Alexandroupolis’ growth to date, more must urgently be done to capitalize on its significant potential. To expedite southeastern Europe’s energy independence from Russia, the United States should promote the expansion of the Trans Adriatic Pipeline (TAP) and the Interconnector Greece-Bulgaria (IGB) pipeline, as well as explore the feasibility of reversing the massive Trans-Balkan pipeline to carry natural gas northward from Greece through Bulgaria, Romania, and possibly Ukraine and Moldova. In tandem, Washington should make clear it backs the development of additional Greek capacity to feed these lines with imported LNG, beyond the floating storage and regasification unit (FSRU) currently under construction at Alexandroupolis.

These steps can form the core of a much-needed campaign to underscore U.S. support for, and concretely advance, the peaceful development of the Eastern Mediterranean’s abundant natural gas as a direct replacement for Russian supplies to Europe. This should include appointing a U.S. special envoy to build on recent European Union efforts to bring LNG into the continent from Egypt and Israel.

American involvement also must deepen on the defense side. Working with its allies, the United States should explore extending NATO’s fuel pipeline in Greece from Kavala to Alexandroupolis, and into Bulgaria and Romania, to simplify logistics for the alliance’s expanding presence in the Eastern Balkans and the Black Sea littoral. Washington also should ensure the looming privatization contract for Alexandroupolis port is awarded to an American company—both to block Russia from securing the bid and to reassure allies that the United States is countering Moscow’s and Beijing’s growing control of critical infrastructure across the eastern Mediterranean and southeastern Europe. In light of NATO’s ambitious new goal to expand its high-readiness forces, the U.S. military should view Greece as an ideal location, both geostrategically and topographically, for combined and joint exercises.

To reach Alexandroupolis’ high ceilings on the energy and security fronts, specifically by developing better pipeline, rail, and road infrastructure to interconnect Eastern Europe, the Biden administration should also increase its June 2022 loan of $300 million to the Three Seas Initiative’s Investment Fund, known as 3SIIF. Fortuitously, many of these actions will contribute directly to global food security by building up Alexandroupolis as a key terminus for overland Ukrainian grain shipments.

Russia’s brutal aggression in Ukraine already is transforming transatlantic security and will continue to do so for the foreseeable future. Fortunately, the United States and Europe have a readily available asset in Alexandroupolis to ensure the alliance can meet these momentous challenges.

Jonathan Ruhe and Ari Cicurel are director of foreign policy and senior policy analyst, respectively, at the Jewish Institute for National Security of America (JINSA).