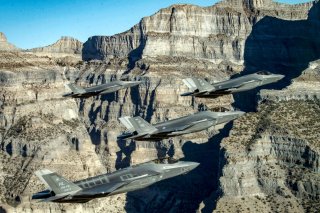 While NATO describes Finland as a “close partner,” the country has not formally joined the alliance. Many speculate that this could be due to Finland’s concern that attempting to join NATO would trigger Russian aggression. But should that stop Finland? Although it’s difficult to predict how Russia would respond, NATO’s collective security guarantee could certainly make Finland safer. After all, if it was in NATO, attacking Finland could invite a military response from dozens of strong European and North American allies.

Could acquiring the F-35 change this equation and potentially inspire Finland to formally pursue NATO membership? In addition to Russia’s aggressive behavior in the region, the unique networking capabilities provided by the F-35 may make it more likely. As a NATO member, Finland’s own F-35s would be reinforced and heavily supported by a multinational stealth fighter fleet.

The collective air power of NATO and its partners could be positioned to greatly outmatch any fleet of Russian Su-57s. Notably, Russia currently operates twelve Su-57s and only plans to acquire seventy by 2027. Should the Russian fleet approach seventy or more in the coming years, it would still be nowhere near the number of U.S. and allied F-35s operating on the European continent. There are many unknowns related to which aircraft may be superior, as the margin of difference would likely come from differences in sensor range and fidelity, stealth performance, computing, and weapons delivery.

However, Sun Tzu’s famous “mass matters” concept may be more relevant. Should multiple squadrons of F-35s form a major multinational coalition, a small number of Su-57s would likely be overwhelmed. This advantage is compounded by the existence of the F-35’s Multifunction Advanced Data Link, which connects all F-35s to one another. This enables the fighters to carry out integrated operations by sharing targeting information, surveillance data, and intelligence information. Simply put, it is a unique capability that Russia does not have.

Will these substantial advantages be enough to inspire Finland to join NATO? That remains to be seen, but it certainly could be a decisive factor in Finland’s decision.