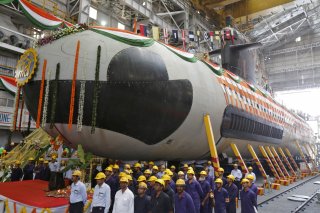 In March 2021, the Times of India reported that the Indian Navy had announced its intent to prioritize the development and construction of a force of six nuclear-powered attack submarines, or SSNs, ahead of building a third, larger aircraft carrier. The initial order of three submarines could begin entering service in 2032.

The SSN program, estimated optimistically to cost $12 billion ($2 billion per submarine), could affect the balance of power in the Indian Ocean as India seeks to offset the growing presence and capability of China’s rapidly expanding navy.

In the last two decades, the PLA Navy has secured access to bases in the Indian Ocean to the west and east of India, and periodically dispatches warships and submarines to patrol those waters. Long-running tensions between China and India meanwhile have mounted, culminating in June 2020 in a deadly clash on the Himalayan border in which dozens of soldiers were killed.

New Delhi’s decision to focus on submarines concludes a year-long debate between senior leaders of the Indian Navy and Chief of Defense Staff Bipin Rawat. Both projects have been on the Navy’s slate for decades, but progress has been slow.

Rawat favored submarines over carriers because the latter make for large and indiscrete targets, and China has developed a wide variety of long-range air, sea- and land-based missiles to attack carriers.

Attack submarines, by contrast, are ideal for navies facing numerically superior adversaries because underwater stealth allows them to (mostly) pick their battles, pouncing upon vulnerable merchant convoys or unsuspecting warships.

Furthermore, even a relatively small submarine force can compel an adversary to devote enormous resources to systematically escorting merchant convoys and valuable warships, lest they sustain insupportable losses.

Those costs were so high that in World War I and II, the United Kingdom and U.S. Navy both initially thought it was better to let convoys go unescorted, only for shipping losses to German U-Boats to rise so catastrophically high that they were forced to backtrack—even if that meant throttling down the pace of shipping overall.

Nuclear Power Under the Indian Ocean

India is on its second lease of a nuclear-powered Akula-class attack submarine from Russia, and in 2019 signed a $3 billion deal for a third lease to begin in 2025.

Russian assistance also played a major role in India’s development of an indigenous nuclear-powered ballistic missile submarine (SSBN), the Arihant, giving India an underwater sea-based nuclear deterrence capability. Three progressively improved submarines based on the Arihant are in the pipeline, with one—the Arighat—due for commissioning this year. These will be followed by a new, larger class of four SSBNs dubbed the S5.

Nuclear propulsion allows submarines to remain underwater essentially indefinitely and traverse long distances without having to expose themselves by surfacing or snorkeling to sip air needed to recharge their batteries.

That allows an SSBN to creep slowly underwater with maximum stealth on patrols that may last two or three months, ready at any moment to respond to orders transmitted by high-frequency radio to unleash a barrage of nuclear-tipped ballistic missiles.

An attack submarine, however, is principally designed for hunting down ships and other submarines. For that role, agility is essential for intercepting vulnerable enemy ships, out-maneuvering underwater foes, and diving deep to evade anti-submarine forces. Here, nuclear propulsion can enable much higher sustained underwater speeds of 20 to 30 knots.

Indeed, India has reportedly been researching higher-strength hull materials that will allow its future SSNs to dive deeper and travel at higher speeds. However, the greatest technical challenge may stem from the submarine’s reactor.

Reportedly, there has been some debate over whether to use the 83-megawatt compact light water reactor developed for the Arihant, as some officers argue that the speed and acceleration needed for an SSN requires a more powerful 190 MW reactor like that used on the Akula-class.

While an SSN’s ability to remain underwater indefinitely is intrinsically stealthy, some nuclear submarines—like Chinese and early Soviet designs—are notably noisier than the Akula or the U.S. Virginia-class. That makes them easier to detect and destroy, and harder for their crew to detect other submarines with their hydrophones.

Thus, the level of acoustic stealth India achieves with its SSN will determine how well they match qualitatively with China’s current submarine fleet.

Realistically, many of the Indian Navy’s submarine needs in the Arabian Sea and Bay of Bengal can be fulfilled by shorter-range AIP- or lithium-ion battery-powered submarines built at a fraction of the price.

However, an Indian SSN fleet would remain uniquely qualified for several offensive and defensive missions.

One classic SSN mission is escorting SSBNs deploying to station, as opposing submarines often attempt to trail behind them while leaving port. An SSN can “keep up” with the SSBNs during that vulnerable phase, and is better suited to dueling with hostile submarines. India is expected to pursue a Soviet-style bastion strategy, in which the SSBNs lurk in nearby waters well screened by friendly aerial, surface, and underwater anti-submarine platforms.

Nuclear-powered submarines would also make good escorts for India’s two aircraft carriers due to having the speed to keep up!

The Indian Navy may also seek to leverage the greater range and endurance of SSNs by deploying them to interdict the few choke points by which Chinese warships can efficiently access the Indian Ocean, notably the Straits of Malacca (at the intersection of Malaysia, Sumatra and Singapore) and the Sunda Strait (between Sumatra and Java.) Admittedly, AIP submarines have the range for this mission, though SSNs could remain on station longer with less exposure.

However, India could also dispatch SSNs through the straits into the Pacific, just as Chinese submarines are patrolling the Indian Ocean. In wartime, just one or two submarines in the Pacific could force the PLA Navy to devote expensive assets to protecting their “backfield,” instead of treating the Pacific as a safe area where shipping can safely go unescorted.

Indeed, an earlier article by the authors looks at a report by the Center for Strategic and Budgetary Assessment suggesting using SSNs in this manner.

Meanwhile, in peacetime, the Indian Navy could use submarines for intelligence-gathering missions in the Pacific.

Finally, SSNs could be used as long-range platforms for delivery of naval special forces and conventional (ie. non-nuclear) land-attack missiles, using say an underwater-launch variant of the 930-mile range Nirbhay-cruise missile. An attack submarine can only deliver a small-scale missile barrage, but such strikes can sometimes have an outsized political/psychological impact.

The Times also notes that New Delhi prefers to partner with France on the new SSNs. Indeed, discussions of a nuclear submarine partnership date back several years.

Moreover, India is currently completing the last of six Kalvari-class AIP submarines derived from the French Scorpene-class submarine offered by Naval Group. That means India could build on an existing partnership with a company that is also building France’s hi-tech Suffren-class SSN.

Finally, while India’s growing military relationship with the U.S. Navy in the Indian Ocean is well known, France also has a substantial presence in the Indian Ocean based on the islands of Reunion and Mayotte, making it an attractive strategic partner.