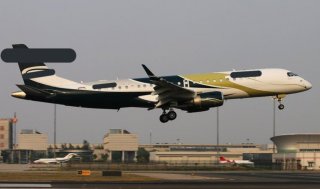 In a ceremony on September 2, the Pakistani Navy inducted into service its first Sea Sultan maritime-patrol/anti-submarine jet—a Brazilian regional airliner refitted with Italian sensors and avionics.

The conversion was achieved unusually rapidly given the order was announced less than a year earlier in October 2020, and there are rumors the lead aircraft still lacks key systems. Nonetheless, two more of the new jets are being converted for the $190 million contract, building towards an expected total procurement of ten aircraft for Pakistan’s Naval Air Arm.

The Indian Ocean is becoming a second front in the maritime competition between Beijing and Washington, one which happens to be shaped around the longer-running conflict between India and Pakistan. Fifty years ago in December 1971 that regional rivalry flared into one of the last major naval conflicts since World War II, with deadly engagements involving submarines, guided-missile boats, and carrier-based aircraft.

Though Richard Nixon unsuccessfully tried to intervene on Pakistan’s behalf in 1971, today Washington is aligning itself with New Delhi and is furnishing the Indian Navy with MQ-9 Predator maritime surveillance drones and versatile P-8 Neptune maritime patrol jets. As its relationship with the United States remains contentious, Islamabad, in turn, is leaning more on its longstanding alliance with China and arms manufacturers in Europe and beyond.

The Sea Sultans will eventually replace the Pakistani Navy’s nine remaining turboprop-powered P-3 Orion maritime patrol planes of 28 Squadron, based in PNS Mehran in Karachi. After years of delay due to an embargo, between 1996 and 2012 Pakistan imported over a dozen P-3s from the United States. These were mostly P-3C anti-submarine models, though a few P-3B Airborne Early Warning (AEW) aircraft using Hawkeye 2000 radars were also procured.

Pakistan’s Orions have had an eventful service life, employed in combat against Taliban insurgents in Swat Valley, performing signals-intelligence gathering, surveillance, and bombing missions. But in 2011, insurgents raided Mehran and destroyed two P-3s based there, though the United States replaced the aircraft. A third P-3C was lost off the coast of Balochistan in 1999 in an accident that killed all twenty-one onboard.

As the future of U.S.-Pakistan relations remains murky, Islamabad explicitly sought a P-3 replacement that wouldn’t be subject to U.S. International Traffic in Arms Regulations (ITAR). Thus the Sea Sultan is based on Brazilian Lineage 1000E regional jetliners purchased second-hand rather than directly from manufacturer Embraer. South African company Paramount Group is installing torpedo launchers and SeaSpray radars made by Italian firm Leonardo into the four-engine regional airliners.

The basic Lineage 1000 airliner has a comparable maximum range to a P-3C but is roughly fifty percent faster at cruising and maximum speed (629 and 543 miles per hour) and has a much higher maximum altitude too. Although the performance of a fully-equipped Sea Sultan is unknown, Pakistan’s tender specified a range of 4,600 miles and a maximum takeoff weight of sixty to seventy tons.

The SeaSpray AESA X-Band multi-mode radar may represent the most important change from the Orion. The 360-degree radar incorporates a Moving Target Indicator for tracking vehicles and synthetic-aperture mode which can provide detailed scans of ships or other surface targets. The SeaSpray 7500V2 model has a maximum range of 368 miles, but the somewhat shorter-range 7300E model, already in use on Pakistani ATR-72 patrol planes and Sea King helicopters, may be installed instead.

Even the 7300E, however, reportedly has high enough resolution to detect life rafts and ship-wrecked humans in inclement weather at a significant distance. Such resolution might also suffice to detect the protruding snorkel of a diesel-electric submarine sucking in air to recharge its batteries.

Like the Orion, Sea Sultans are planned to have electromagnetic and signals intelligence sensors (ESM and ELINT), sonar buoys, and an acoustic analysis station for submarine hunting, a satellite communications link, and flare/chaff dispensers to decoy missiles. They will also carry homing torpedoes for sub-hunting, and likely anti-ship missiles for surface warfare.

Pakistan’s Navy is focused on denying India’s larger fleet access to its littoral waters. Maritime patrol planes thus improve the Pakistani Navy’s awareness of ships and submarines approaching said waters, limiting the risk of surprise attack (like the Indian Navy’s successful missile attack on Karachi in 1971) and enabling coordinating response by other assets. Furthermore, they can attack maritime targets, conduct search and rescue missions, and scoop up electronic intelligence data on other militaries operating in the region.

One might also assume the new jets may be used to search for India’s small but growing fleet of nuclear-armed ballistic missile submarines. However, once armed with 2,100-mile range K4 missiles, India’s SSBN submarines will likely patrol in the relatively secure waters of the Bay of Bengal, beyond the practical reach of Pakistani aviation in wartime.

In a speech in October 2020, former Chief of Naval Staff Admiral Zafar Mahmood Abbasi stated that Pakistan was developing “…in the hypersonic domain, the ship-based, long-range, anti-ship and land-attack P282 ballistic missile.” He described it as an effort to “leapfrog” Pakistan to capabilities similar to India’s supersonic Brahmos cruise missile.

Hypersonic weapons, which by definition attain speeds exceeding Mach 5, are a buzzword these days, and several analysts have wondered whether the admiral actually was referring to a hi-tech surface-skimming cruise missile—unlikely due to the difficulty of developing air-breathing hypersonic weapons—or a missile that deploys a hypersonic glide vehicle that skips just above the atmosphere.

But as many traditional ballistic missiles travel at hypersonic speeds, it seems unnecessary to theorize Abbasi meant such exotic technologies. After all, consider that Pakistan’s ally China has developed a family of anti-ship ballistic missiles (ASBMs) across the short to medium range spectrum (the DF-21D, DF-26, and export-oriented CM-401). That obviously creates a practical vector by which Pakistan might develop this technology, just as India cooperated with Russia to develop its Brahmos missile.

The P-282 has also been described as an Anti-Access/Area-Denial (A2/AD) system designed to impose risks on shipping across large swathes of the ocean—a concept popularized mostly due to China’s ASBM technology, though today the term has many critics.

Admittedly, China’s ASBMs are deployed on land, not ships. But then the Indian Navy does deploy Dhanush ship-launched ballistic missiles capable against both land and maritime targets, albeit only out to a range of 200 to 466 miles depending on payload.

However, the big limitation of ASBMs is that despite projecting a threat across many hundreds of miles, they require a separate surveillance platform to detect potential targets and promptly relay targeting data—not easy when you consider ships are moving targets and the infrared-sensor used by ASBMs for terminal guidance only covers a relatively narrow cone.

In theory, the new Sea Sultans could serve as especially mobile enablers for an ASBM thanks to its sensors, communication systems, and long-range, long-endurance characteristics. They could rove ahead, locate ships, call in a missile attack, and possibly even transmit mid-course corrections to the missile.

That said, in wartime maritime patrol planes would be vulnerable to hostile fighters—even more so than usual because India might stage fighters at Jamnagar airport with range enough to interdict aircraft operating over the Arabian Sea.

Maritime patrol planes would have to remain outside the engagement range of surface-to-air missiles on Indian warships, which may extend to ninety-three miles with Barak-8ER missiles built by Israel for the Indian Navy. The Barak-8 also might vex ASBMs, as it is designed for short-range ballistic missile defense capability, and is alleged to have shot such a missile down in the 2020 Nagorno-Karabakh war.

Finally, it’s worth noting the P-282 has not been characterized as nuclear-capable despite Pakistan’s extensive inventory of tactical nuclear weapons. However, the development of ship-launched ballistic missiles could serve as a stepping stone to developing a submarine-launched nuclear missile, giving Pakistan a more flexible and survivable sea-based nuclear deterrence than its short-range submarine-launched Babar cruise missile.