North Korea: Why the Kingdom of Kim Jong Un Can Never Be Normal 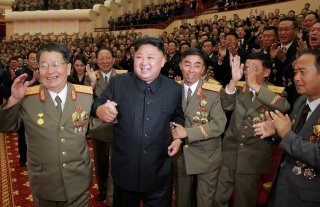 Anyone who visits North Korea quickly recognizes that the Democratic People’s Republic of North Korea is not a normal nation. Indeed, when I first visited in 1992 my hosts solemnly insisted that there was no one else on earth like Great Leader Kim Il-sung. Of course, I had to agree that “Great Leader” George H. W. Bush just didn’t sound right.

Yet the DPRK isn’t the only abnormal place in the world. Idi Amin, the military officer who became president of Uganda and the Khmer Rouge’s communist party of Kampuchea both edged toward the demonic. Jean-Bedel Bokassa, the army leader and crafty coup participant who ruled the Central African Empire, added a comic veneer to tyrannical rule. Enver Hoxha, the communist revolutionary who ruled Albania, and Isaias Afwerki, the first president of Eritrea, ruled their respective countries in ways that most closely matched Pyongyang’s totalitarian model. Indeed, the latter still does and is known as the North Korea of Africa.

Of course, none of these regimes had nuclear weapons. Yet Pyongyang is not the first unpredictable and radical regime to possess the ultimate weapon. Joseph Stalin, who ruled the Soviet Union as a dictator, was a cautious predator who murdered and starved his way to power. Without hesitation, he implemented policies that starved millions of Ukrainians, scribbled his initials on page after page of names of innocent Soviet citizens to be executed, ordered the deportation of entire peoples, and imposed Moscow’s rule on states occupied by the Red Army. Alas, Stalin’s USSR was the next country after America to develop nuclear weapons.

However, Stalin appeared stable compared to Mao Zedong, who wrecked his nation’s agriculture and industry in the Great Leap Forward, during which tens of millions of people starved to death. Then Mao triggered the Great Proletarian Cultural Revolution, part Communist Party purge, part revolutionary purification, part civil war, which tore his nation apart and killed hundreds of thousands of Chinese. He spoke of the potential for nuclear war with India’s Prime Minister Jawaharlal Nehru, opining that if “half of mankind died, the other half would remain while imperialism would be razed to the ground and the whole world would become socialist.”

Moreover, attempts to protect Islamabad’s nuclear weapons from both the United States and India exacerbate the dangers. “Instead of moving nuclear material in armored, well-defended convoys, [the military] prefers to move material by subterfuge, in civilian-style vehicles without noticeable defenses, in the regular flow of traffic,” according to Jeffrey Goldberg of The Atlantic and Marc Ambinder of the USC Annenberg Center on Communication Leadership and Policy. As a result, “in a country that is home to the harshest variants of Muslim fundamentalism, and to the headquarters of the organizations that espouse these extremist ideologies, including Al Qaeda, the Haqqani network, and Lashkar-e-Taiba (which conducted the devastating terror attacks on Mumbai three years ago that killed nearly two hundred civilians), nuclear bombs capable of destroying entire cities are transported in delivery vans on congested and dangerous roads.”

Suddenly a nuclear North Korea doesn’t quite look so fearsome.

After three decades of insisting that the DPRK can never be allowed to possess nuclear weapons, Washington must confront the failure of U.S. policy. American policymakers should consider accepting North Korea as a nuclear state and treating it as a normal country.

It no longer makes sense to talk of preventing the North from developing nuclear weapons. It already has them. There is great uncertainty as to how many nuclear weapons the Kim regime has or could potentially make—around sixty is a common estimate. However, that could be just the start. The Rand Corporation and Asan Institute figure Pyongyang could possess some two hundred by just 2027, a scant six years away. That would give it more nuclear weapons than currently possessed by India, Israel, and Pakistan.

Additionally, the United States does not have a realistic strategy for preventing the DPRK from moving forward. True, some policymakers confidently explain that all Washington must do is convince North Korea that it would be more secure without them than with them. Alas, that requires a mix of sufficient coercion and trust to move Kim Jong-un and the rest of the leadership. What could possibly go wrong?

Preventive military strikes or even serious threats to attack would risk a conflict that would devastate the Republic of Korea, kill thousands or tens of thousands of Americans, and spread war to surrounding states. Attempts to decapitate the regime to prevent retaliation or convince the leadership not to respond would be wild gambles with potentially millions of lives at stake. If Pyongyang completes the development of intercontinental ballistic missiles, death and destruction could visit multiple U.S. cities. Military action just isn’t a viable option.

Economic sanctions have failed. That doesn’t mean they are ineffective: after all, Kim wants them removed. However, they do not cause enough pain to cause him to abandon the DPRK’s nuclear and missile programs. American hardliners argue for strengthening restrictions, especially going after Chinese banks and companies. However, over the last year and more the North has isolated itself more completely than sanctions ever could and has survived.

Some policymakers still fantasize about Beijing acting as Washington’s catspaw and completing the quarantine. But the People’s Republic of China (PRC) fears the consequences of a North Korean collapse, opposes a united Korea allied with America, and sees no reason to aid the United States when the latter is seeking to contain the PRC. Nor do Chinese officials believe pressure alone can force Pyongyang to surrender such an arsenal.

Which leaves negotiation as the best, and only practical, strategy. However, that requires mutual trust to succeed. None exists. Oral promises and paper guarantees pale compared to Washington’s record of targeting the infamous “Axis of Evil” and other disfavored states, voiding and violating agreements already reached, and imperialistic, even messianic, efforts at regime change. After watching the fate of Libya’s Muammar el-Qaddafi any foreign leader of any foreign adversary would be a fool to completely denuclearize.

The only hope to overcome such well-founded paranoia—and merely a hope, likely forlorn—would be to follow the Singapore summit statement which envisions improved bilateral relations and regional circumstances. And that would require more than producing a video of happy days in the DPRK if Kim embraced his one-time enemies. To have any chance of a successful denuclearization or even disarmament requires establishing an essentially normal relationship between the United States and North Korea. Because that would be the only convincing evidence that Washington would not later attempt to effect regime change.

Most realistic would be a focus on arms control, with the hope of developing a relationship that might lead to denuclearization. Even such a more limited objective would be advanced by developing a broader and more normal relationship. Meaning diplomatic ties—officials contacts are especially important with potentially dangerous adversaries—cultural exchanges, and economic ties.

The question ultimately is, what makes for a safer Northeast Asia? An isolated, sanctioned, and impoverished North Korea, depending on a hostile PRC and possessing a swelling nuclear arsenal? Or a more prosperous, engaged, and connected DPRK, with economic and political ties well beyond Beijing, which might prove willing to negotiate away at least part of its potential arsenal?

The skeptics might be right, that Kim wants nukes for ill-use, such as a new war to unify the peninsula. However, isolation is the counsel of despair. That future would rapidly grow ever darker as the North increased its nuclear and missile arsenals.

Moreover, so far Kim has behaved differently than his predecessors in significant ways. Although no liberal, he appears to harbor no illusions about the difficulties facing his nation and therefore likely realizes the disastrous outcome of any conflict. Thus, Washington should test him by moving away from what North Korea calls today’s “hostile” policy.

Doug Bandow is a senior fellow at the Cato Institute.  A former special assistant to President Ronald Reagan, he is the author of several books, including Foreign Follies: America’s New Global Empire.