What Will Progressives Demand From Biden on Foreign Policy? 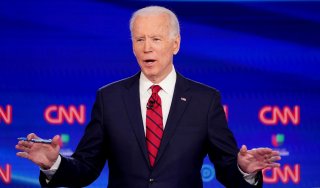 Biden had defeated insurgent progressive Sen. Bernie Sanders (I-Vt.) in the Democratic presidential primaries, but has signaled that he wants to incorporate some of Sanders’s demands into his own platform.

Monday’s letter, obtained by the National Interest, laid out the top ten foreign policy priorities of grassroots progressives, from reigning in presidential war powers and military spending at home to cutting security aid, to tackling human rights abuses and stopping “further militarization of our relationship” with Russia and China abroad.

“For decades, U.S. foreign policy has been overly focused on confrontation with perceived adversaries and the global projection of U.S. military power,” the letter reads. “The American people are looking for a leader who will turn the page on 9/11 policies that have resulted in an endless cycle of war, countless lives lost, increased global instability, large-scale refugee flows of the displaced, and the violation of Americans’ civil liberties and human rights.”

The letter asked Biden to return to the 2015 nuclear deal with Iran, close the Guantanamo Bay Detention Center, and support Congress repealing its 2001 authorization for the use of military force, which has been used to support conflicts across the Middle East.

The letter also set several benchmarks for the next Democratic administration: cutting military budgets by $200 billion per year, declassifying the Senate Intelligence Committee report on CIA torture, and admitting at least 125,000 refugees in the first year of a future Biden administration.

The Trump administration has slashed the refugee admissions ceiling to a record low of 18,000 for the fiscal year 2020.

Think tanks traditionally influential with progressives, including the Center for International Policy, Just Foreign Policy, and Win Without War, signed on. So did two rising stars in the foreign policy field: the avowedly socialist People’s Policy Project and the Quincy Institute for Responsible Statement, a “pro-restraint” group featuring heavyweights from both the left and right.

Some of the proposals in the letter are more likely to gain traction than others.

The letter called for “leveraging the annual $3.8 billion in U.S. military funding to Israel” to push for a “just resolution to the Israeli-Palestinian conflict,” something that Biden foreign policy advisor Tony Blinken has signaled that he will not do.

Biden has accused the Trump administration of acting soft on China, a stance that progressive lawmakers have pushed back on.

But he has also said that the Trump administration’s policy towards Iran has been a “mistake,” signaling a return to the 2015 deal. And the Biden campaign sent an open invitation to Sanders advisors to advise Biden on foreign policy last month.