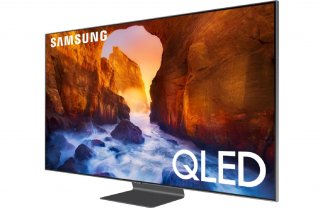 Despite whatever you may think about Samsung, the Korean tech company’s QLED HDTV offerings the past few years have filled a certain niche and they continue to have a loyal customer following.

More recently, however, in an effort to keep up tech-wise with LG’s OLED TVs, the prices for QLED sets have continued to trend upwards, putting consumers in a difficult spot in picking which TV to purchase.

It seems as though the 65-inch Q90R QLED 4K TV has already irked many with its high price point. This particular model is currently going for $2,600, but if you add 10 inches to it, the price tag jumps to a whopping $4K.

Sure, the Q90R has made valiant strides to make it more competitive with its OLED counterpart, but do the improvements really justify the price? At these levels, one could just as easily go with a quality OLED set and know that they have the best panel on the planet.

Keep in mind that despite the fancy name, a QLED TV is basically an LCD TV with quantum dots, which are microscopic particles that when hit by light, emit a certain different colored light. The source of this light is the LED backlight, and that light must pass through more layers, such as the LCD layer, to produce the images on the screen.

In particular, QLEDs have been shown to fail miserably when it comes to wide-angle viewing, where the panel can lose contrast and look discolored or tainted if you happen to be stuck on the outside seating areas. To Samsung’s credit, this pesky issue has shown some improvement in both the Q90R and Q80R models, but if you’re paying nearly $3K on a TV, you should expect people to have a top-notch viewing experience without having to sit directly in front of the screen.

These visual shortcomings can be blamed on the panel technology. As with all LCD-based displays, different areas of the screen can often appear brighter than others, and the backlighting can at times bleed through. When viewed at a side, the LCD layer has a certain thickness that can block some of the light coming through, and this is more pronounced at extreme angles.

This is still a work in progress for Samsung, and until QLED panels match up better with OLEDs, there’s no reason to spend $3K to own a Q90R. The smarter choice would be to consider the nearly flawless LG B9 Series that can be yours for $1,300, and also know that the Q70R QLED is only a hundred dollars more.