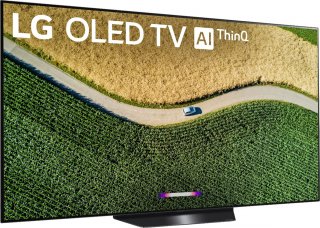 We might still be a couple of years away from breaching that hallowed $1,000 mark, but there are a few options out there that are inching closer.

Within that price range, the best option by far right now is LG's 55-inch B9 Series, which is currently retailing for only $1,300. If you do decide to splurge on this model, know that it will likely surpass all of your high expectations regarding what OLED panels can offer.

Here’s a quick rundown of what you’ll get with the B9 Series: sleek and slim design, fantastic picture quality, accurate colors, wide-angle viewing, deepest blacks and inimitable uniformity and contrast ratios.

Moreover, the B9 matches up very well to its more expensive brethren, the C9 Series (which you can upgrade to this model for a few hundred dollars more). Aside from having minor design tweaks and slightly less processing speeds than the C9, the overall picture quality has been shown to be nearly identical.

Even compared to the high-end CX models (which feature Dolby Vision IQ, Nvidia G-Sync and Filmmaker Mode), if it’s only the picture quality you’re after, that top-notch value is unquestionably still with the B9 Series.

As expected from an LG OLED TV offering, there are plenty of extra goodies as well, namely the built-in Amazon Alexa and Apple AirPlay 2. It also boasts Dolby Vision and Dolby Atmos and all of the must-have HDMI 2.1 extras, including eARC, Auto Game Mode and Variable Refresh Rate.

Keep in mind that although the B9 is pretty great for gamers, if you’re still seeking that next-gen level of gameplay, the CX or BX Series might be a better fit because they support both FreeSync and G-Sync. But for everyday TV-watching and movie nights, the B9 will surely check off all the boxes.

The B9 is amazing to look at as well—as the minimalist-driven design features a super-slim modern panel. LCD TVs can’t compete with the thinness of OLEDs because they do need backlighting to produce the images. There is, though, a conspicuous bulge at the bottom of the panel, but this houses the necessary inputs, power supply, speakers and other ancillary components.

Much like Samsung’s Tizen smart TV operating system, LG’s webOS is surely still a work in progress, though it has made considerable improvements in recent years. Yes, it has a pleasant, stripped-down user interface, which hasn’t changed much since it launched, but it really lacks what’s needed for today’s data-intensive streaming TV world.

Not surprisingly, the webOS comes with essentials like Netflix, Amazon and YouTube, which are installed by default. But the overall range of offerings is a bit lackluster—perhaps that’s why many consumers still prefer Roku or Android TV.

Lastly, be aware that, like all OLED TVs, the B9 can suffer from image retention or burn-in. There also have been instances of digital artifacts and slight banding, but these are minor issues that do not diminish the superb overall value that you’ll be receiving.